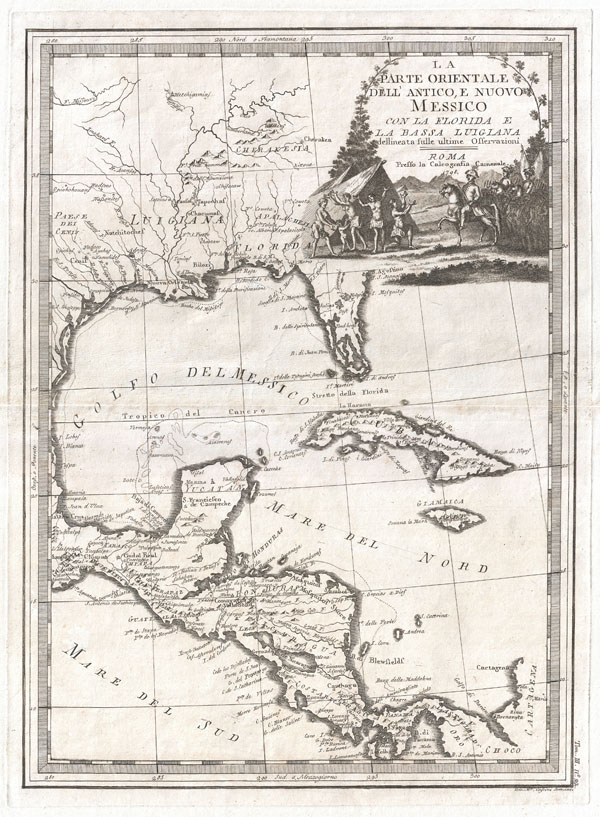 One of the last decorative maps of Florida and the Gulf of Mexico to appear in the 18th century.

This is a stunningly rendered 1798 map of Florida, the Gulf of Mexico, Louisiana, and Central America by the Italian cartographer Giovanni Maria Cassini. While visually alluring, this map is cartographically primitive. Florida is here represented as an archipelago. Cassini also fails to attach the Mississippi River to the Missouri. He does however make some effort at naming a number of American Indian tribes in the Mississippi Valley and Texas, including the Cherokee (Cherakesia), Chacumal, the Apalache, and the Cenis.

In the upper right quadrant there is an attractive decorative cartouche depicting a Spanish conquistador army entering an American Indian village. The naked villagers, including children, are clearly distraught and fearful, imploring either the conquistadores, god, or both for mercy. Interpreting this cartouche one can easily read Cassini's harsh criticism of Spain's brutal colonial policy in the Americas.

This map was published in Cassini's 1798 Nuovo Atlante Geografico Universale. This atlas was one of the last great decorative cartographic compilations of the 18th century and is exceptionally rare. Maps from this atlas with their modern cartouche work, distinctive engraving, rich dark impressions, and attractive border work are among the most desirable cartographic works of the period.

Library of Congress, Map Division, G3292.L3 1798 .C32. Lowery, The Lowery Collection. A Descriptive List of Maps of the Spanish Possessions, 719c. Phillips (Atlases) 719c.
Looking for a high-resolution scan of this?