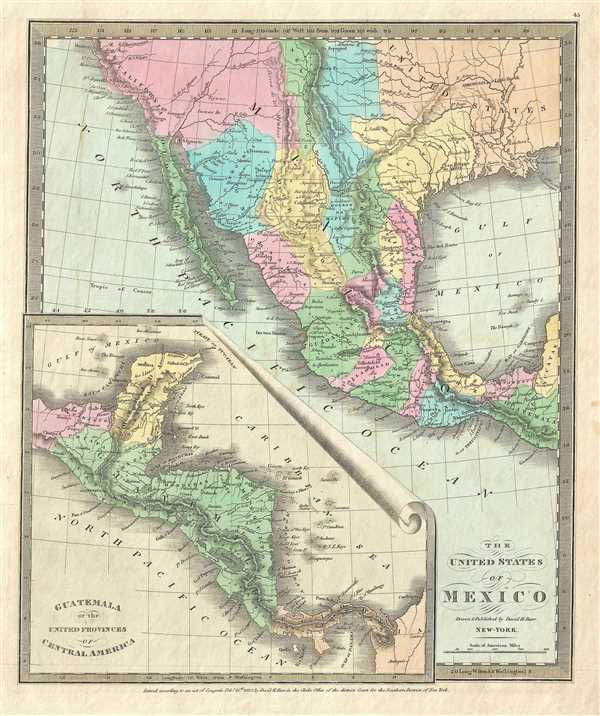 Burr's first edition map of Mexico before the Texas War of Independence.

This is an attractive 1832 first edition map of Mexico and Guatemala by David H. Burr. It covers from Upper California south to Panama including the modern day region of California, New Mexico, Arizona, Colorado, Utah, Nevada, Texas, Guatemala, Honduras, Nicaragua, El Salvador, Costa Rica and Mexico. Towns, rivers, mountains and various other important topographical details are noted. Elevation throughout is rendered by hachure and political and regional territories are color-coded.

An inset map on the lower left corner details Guatemala or the United Provinces of Central America. Issued before the 1836 Texas War of Independence, it is shown as part of Mexico. In 1845, following nearly a decade of semi-independence, Texas joined the United States, becoming its 28th state.

According to Ristow, although Burr is credited on the title page, he left this atlas incomplete. He was appointed as topographer to the U.S. Post Office, and of the sixty-three maps finally included in this atlas, only completed eight. The rest of the maps were then completed by Illman and Pilbrow in Burr's style. This map was ‘Entered according to act of Congress in the year 1832 by David H. Burr in the Clerk’s office of the District Court for the Southern District of New York’, but was not published until the atlas was released in 1835. Published by D. S. Stone in Burr’s New Universal Atlas.