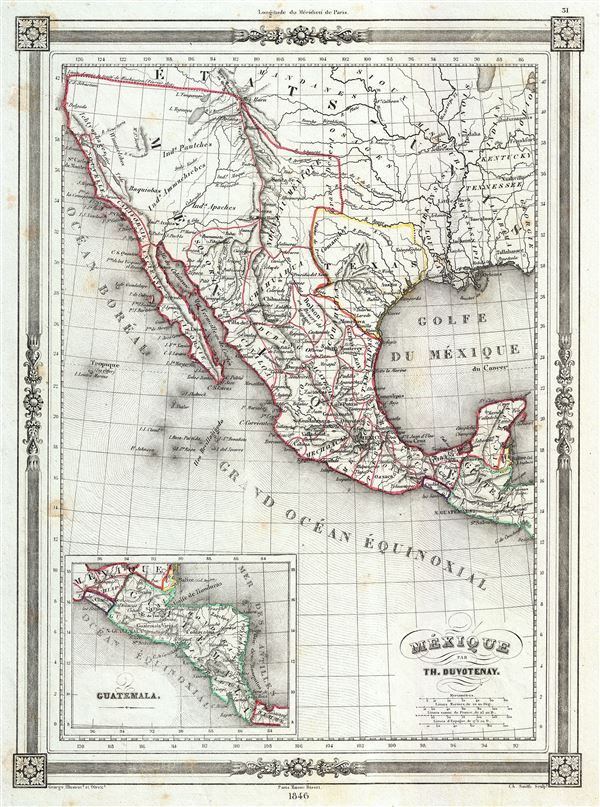 This is a highly desirable 1846 map of Mexico by Thunot Duvotenay. Duvotenay published several different editions of this Mexico map - this being the most desirable due to its depictions of the ephemeral Republic of Texas. The map covers all of modern day Mexico and southwest United States. The map offers a number of fascinating elements including. The fictional rivers Jesus Maria and Wimmetchke are shown extending eastward from San Francisco Bay. The map labels the Great Salt Lake as Lake Teguayo after Jose Antonio de Alzate y Ramirez. Lake Teguayo is said by some to be the legendary homeland of the Aztecs. To the north of Lake Teguayo, today's Lake Utah is labeled Lake Timpanogos. Mexico itself is divided into its various intendancies. An inset in the lower left quadrant focuses on Guatemala. Features a beautiful frame style border. Prepared by Th. Duvotenay for publication as plate no. 31 in Maison Basset's 1846 edition of the Atlas Illustre.

Very good. Blank on verso. Minor spotting near borders.
Looking for a high-resolution scan of this?