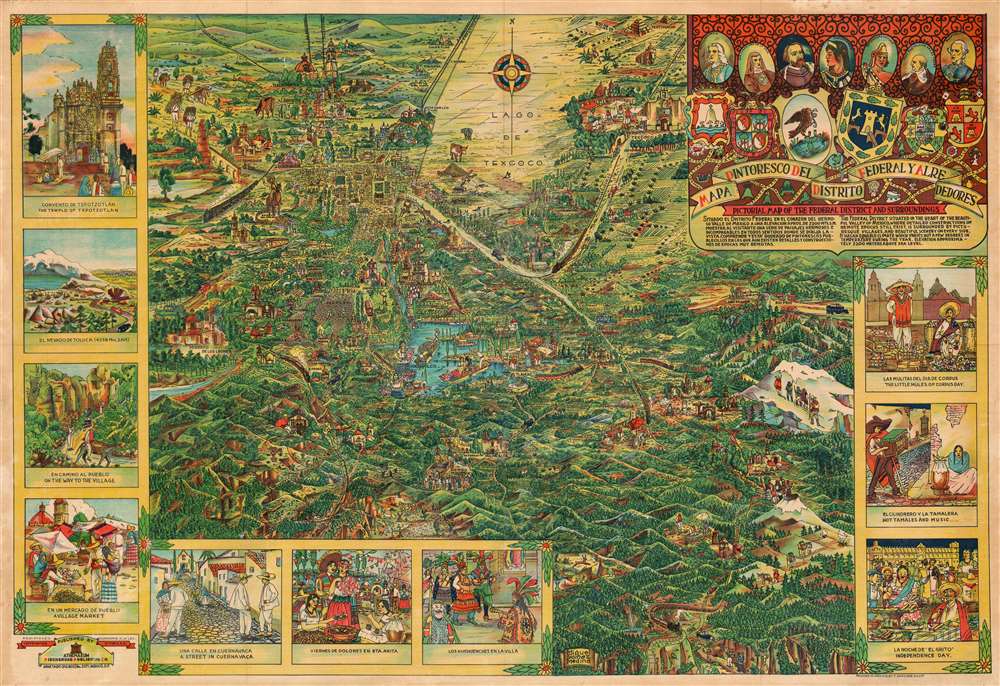 Issued during the Golden Age of Pictorial Maps (c. 1920 - 1960), this is a wonderful whimsical map of the Valley of Mexico City (DF, Distrito Federal) by Mexican artist Miguel Gómez Medina. Although not drawn to scale, the map centers on the lake of Xochimilco and extends north as far as the majestic ruins of Teotihuacan, and as far as the volcano Popocatépetl. The grid structure of the Centro Histórico and the Zócalo are obvious just to the north of the lake. Cartoon illustrations throughout focus on Mexican life and culture but also include highways and railroads – indications that Mexico is both rich in culture and rapidly embracing modern technological developments. The map proper is surrounded by scenes from Mexican life, including a street view of Cuernavaca, a village market, the Nevado de Toluca, the Convento de Tepotzotlan, and a night scene in the Zócalo during Mexican Independence Day La Noche de 'El Grito', among other scenes.

This is probably the rarest and certainly among the finest of Miguel Gómez Medina's pictorial maps. Most date the map to 1930, but we have traced a copyright record filed by the publisher, Eugenio Fischgrund, in the United States definitively dating the map to November 11, 1935. This map was printed in Mexico by F. Sanchez. We are aware of only one example in an institutional collection at Stanford University. This map is rare to the market.