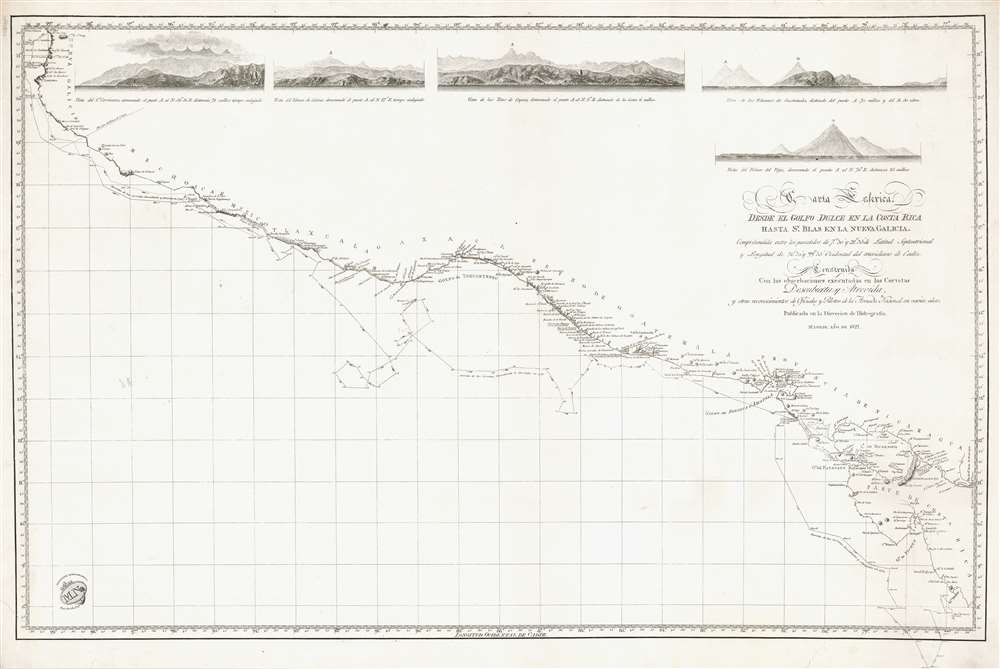 Representing the most advanced data available to the Spanish Admiralty at the time, this 1822 Direccion Hidrografía nautical chart or maritime map details the Pacific coast of Central America from southern Mexico and Guatemala to Costa Rica. The chart traces the movements of the 1789 - 1794 Spanish government sponsored Malaspina Expedition, a scientific expedition akin to those of Captain Cook, and labels the expedition's two ships the Descubierta and the Altrevida. Guatemalan volcanoes, Lake Nicaragua, and Acapulco are among the many coastal features. Five coastal views are included along the top border and illustrate the Volcán de Colima in Mexico, the Volcán de Vieja in Costa Rica, and the volcanoes of Guatemala.

The Malaspina Expedition was a 5-year naval odyssey of exploration led by Alessandro Malaspina and José de Bustamante y Guerra. With a crew that included cartographers, naturalists, scientists, and skilled draftsmen, the expedition left Cádiz on July 20, 1789. Inspired by the achievements of Cook and Laperousse, the expedition's goal was to compile the first concrete scientific description of Spain's American colonies. The convoy crossed the Atlantic Ocean, stopped at the Rio de la Plata, and then sailed around Cape Horn into the Pacific Ocean. They spent the next three and a half years in the Pacific, crossed it twice, and visited the newly established British colony of Port Jackson (Sydney) in New South Wales, Australia. Along the way, cartographers fixed the measurements of America's west coast with a level of precision never before achieved. Considered a major success, the expedition collected ethnographic treasures, measured the heights of mountains, explored glaciers, mapped shorelines, collected natural specimens, and were the first major long-distance sea voyage that didn't experience an outbreak of scurvy.

This map was created and published by the Direccion Hidrografía in 1822. The OCLC catalogues only one example, which is part of the collection at the Biblioteca Nacional in Madrid. We have also found references to a possible example at the Madrid Naval Museum Archive.