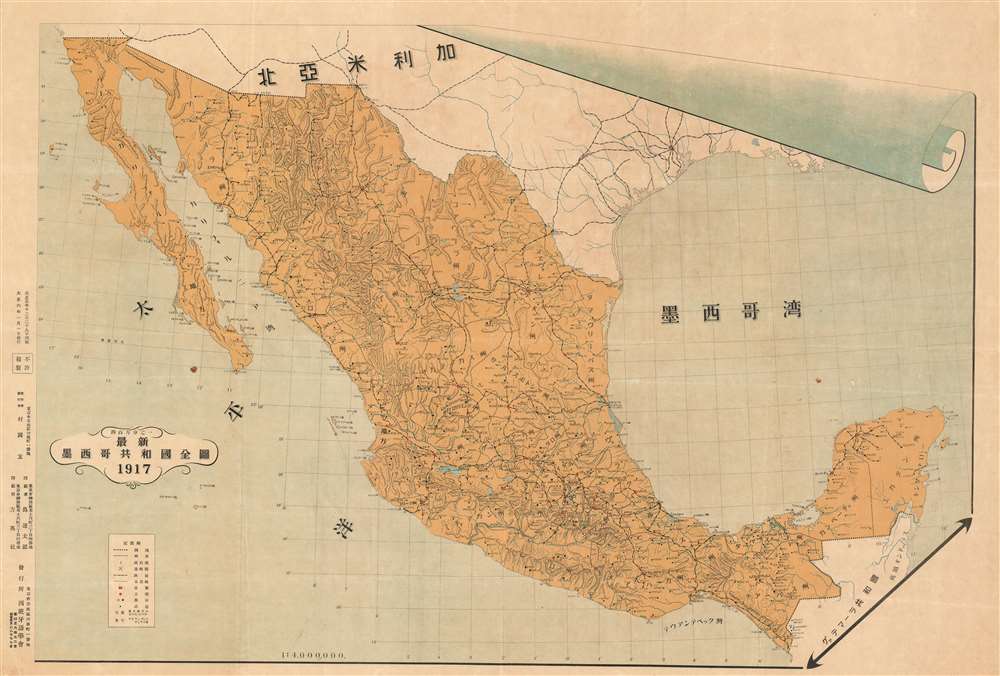 A relic of one of the most extraordinary events in World War I, this is a 1917 Japanese Gen Muraoka (村岡玄 著) map of Mexico issued in response to the infamous Zimmermann Telegram. The Telegram, intercepted by British Intelligence, proposed an alliance between Mexico, Japan, and Germany against the United States in the event that the U.S. entered World War I. While the missive was intercepted and the proposed protocol failed, it generated Japanese interest in Mexico and influenced U.S. participation in WWI against Germany. This is the only known map to demonstrate Japanese interest in the Zimmermann Telegram.

In 1917 Germany was about to commence unrestricted submarine warfare in the Atlantic, which it rightly believed might trigger the undesirable U.S. entry into World War I. Hoping to forge alliances to mitigate any U.S. war interference, Arthur Zimmermann, a Staatssekretär (top-level civil servant) in the Imperial German Office, sent a bizarre telegram to the German ambassador to Mexico, Heinrich von Eckardt, proposing a Mexican-Japanese-German Alliance. The telegram proposed,

That we shall make war together and together make peace. We shall give general financial support, and it is understood that Mexico is to reconquer the lost territory in New Mexico, Texas, and Arizona. The details are left to you for settlement. You are instructed to inform the President of Mexico of the above in the greatest confidence as soon as it is certain that there will be an outbreak of war with the United States, and suggest that the President of Mexico, on his own initiative, should communicate with Japan suggesting adherence at once to this plan. At the same time, offer to mediate between Germany and Japan. Please call to the attention of the President of Mexico that the employment of ruthless submarine warfare now promises to compel England to make peace in a few months.

The Zimmermann Telegram was ultimately intercepted by British Intelligence and both Mexico and Japan denied any interest in allying with Germany. Nonetheless, it generated anti-German, anti-Mexican and anti-Japanese sentiment in the United States leading, along with the U-boat bombing of several American ships, to the United States declaration of War on Germany in April 1917. Japan, which was at the time already involved in World War I with Allied Powers, declared,

If such a proposal were made, it is one that could not be entertained by the Japanese Government, as it is an absolutely impossible proposal. Japan is not only in honor bound to her allies in the Entente, but could not entertain the idea of entering into any such alliance at the expense of the United States.

Nonetheless, German diplomatic insight must be credited, for even in 1917 Japan's rising aggression in Asia-Pacific put it on a collision course with United States, ultimately leading to the bombing of Pearl Harbor in World War II.

Prepared by the Japanese Spanish-language scholar Gen Muraoka (村岡玄 著). Published by the West Bank Fellowship (西班牙語學會) in 1917. The only other example we have been able to identify is at the National Diet Library in Japan.

Gen Muraoka (村岡玄 著, 1887 - 1976) was a Japanese scholar and mapmaker whose work focused on Japanese-Spanish translation and Japanese immigration to Mexico.