1847 Mitchell Pocket Map of Texas at fullest and Mexico 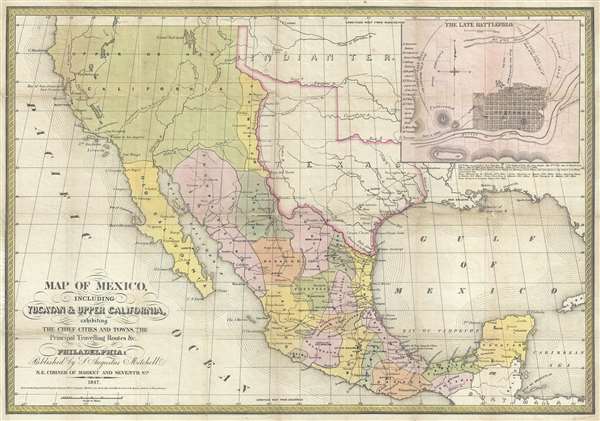 1847 Mitchell Pocket Map of Texas at fullest and Mexico

Important map illustrating Mexico and Texas just before the 1848 Treaty of Guadeloupe-Hidalgo. Texas at its fullest with stovepipe configuration.

This is Samuel Augustus Mitchell's important 1847 map of Texas at its fullest, Mexico, and Upper California. This is one of the most important and striking maps issued to illustrate the Mexican American War. Centered on Texas, Mitchell's map covers from 42°N to the Yucatan, and from the Pacific to Cuba. Six Mexican-American War battle fields are identified and illustrated by flags including the Alamo, San Jacinto, Palo Alto, Resaca de la Palma, Buena Vista, and Monterey. The Treaty of Guadeloupe Hidalgo, signed in 1848, ended the war and ceded significant portions of Mexican territory, including Texas and Upper California, to the United States. This map therefore shows the final iteration of Mexican territory before the 1848 cession of California, Texas, and the Southwest.

Texas is here centrally represented its iconic stovepipe form, an ephemeral boundary configuration that lasted between Texas's joining of the United States in 1845 and the Compromise of 1850. The Texas illustrated here follows the original claims of the Republic of Texas, including half of present-day New Mexico and the famous Texas stovepipe. Formed in part by the Rio Grande and Arkansas Rivers, the stovepipe extends north into to what is now central Colorado, including parts of Oklahoma, Kansas and even Wyoming. It is also noteworthy that the stovepipe reached north of the 1820 Missouri Compromise line despite Texas entering the Union as a Slave State. In the Compromise of 1850, Texas was forced to surrender much of its original territory in exchange for federal assumption war debt.

There is a large inset in the upper right focusing on Monterrey, Mexico, entitled, 'The Late Battlefield.' This illustrates the September 21–24, 1846 Battle of Monterrey. During this decisive battle, General Pedro de Ampudia and the Mexican Army of the North was defeated by the Army of Occupation, a force of United States Regulars, volunteers, and Texas Rangers under the command of General Zachary Taylor. The hard-fought urban combat led to heavy casualties on both sides. Following the battle and surrender of the city, both sides negotiated a two-month armistice wherein Mexican forces were allowed an orderly retreat.

Of additional note is the identification of the Sutter's colony of Sutter's New Helvetia on the Sacramento River. Gold discovered at Sutter's Mill in the following year, 1848, would lead to the 1849 California Gold Rush, and the most significant mass migration in American history. Also of interest is the indication of several emigrant trains, including the Great Spanish Trail to Santa Fe, The Trader's Route to Independence, Mo., and the old Spanish rode to Nacogdoches, and Natchitoches via San Antonio. On the Plate River, the important frontier military settlements of Ft. Laramie and St. Vrain are noted. The Pecos River is curiously identified as 'Puerco.'

There are several states and editions of this map, the present example being the second, issued in 1847. The first edition appeared in 1846. The second, as here, is according to Rumsey the first 1847 edition. A third edition, the second 1847 edition, with an additional attached map detailing the overland route from Veracruz to Mexico City, appeared later in the year. In 1850 a fourth edition was issued separately by Dorby (possibly Derby) and Miller in Auburn, New York. The following year, 1851, saw the release of a fifth and final edition, also issued in Auburn, to illustrate Derby and Miller's History of the War Between the United States and Mexico.