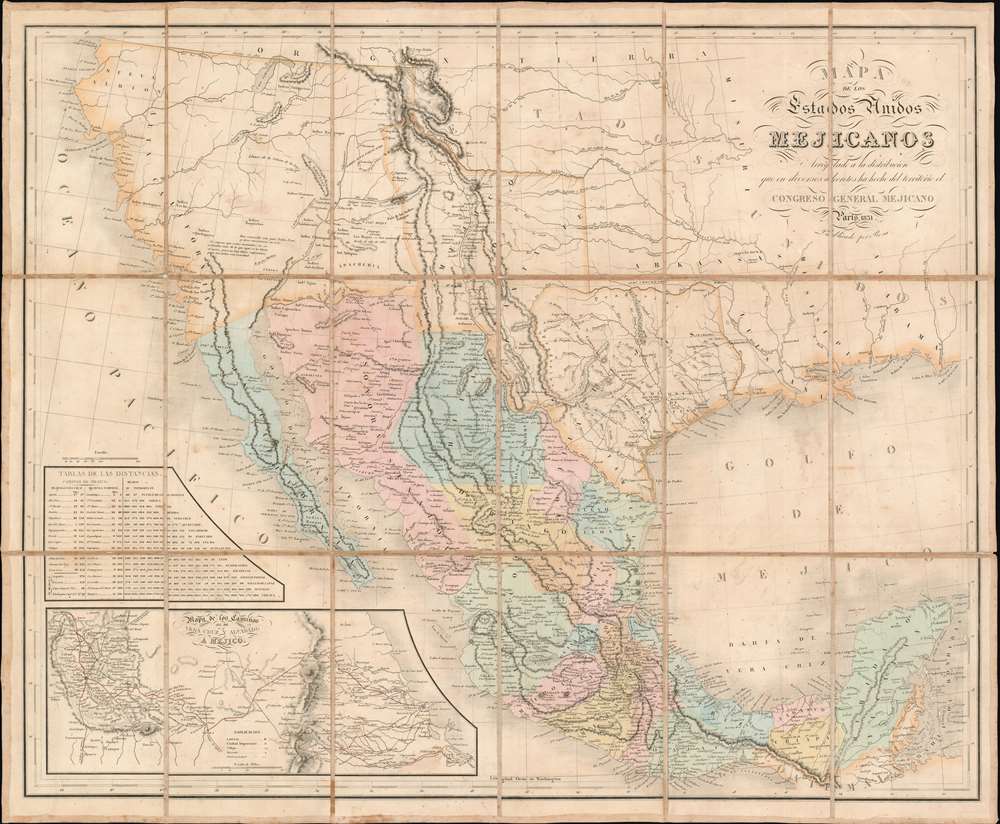 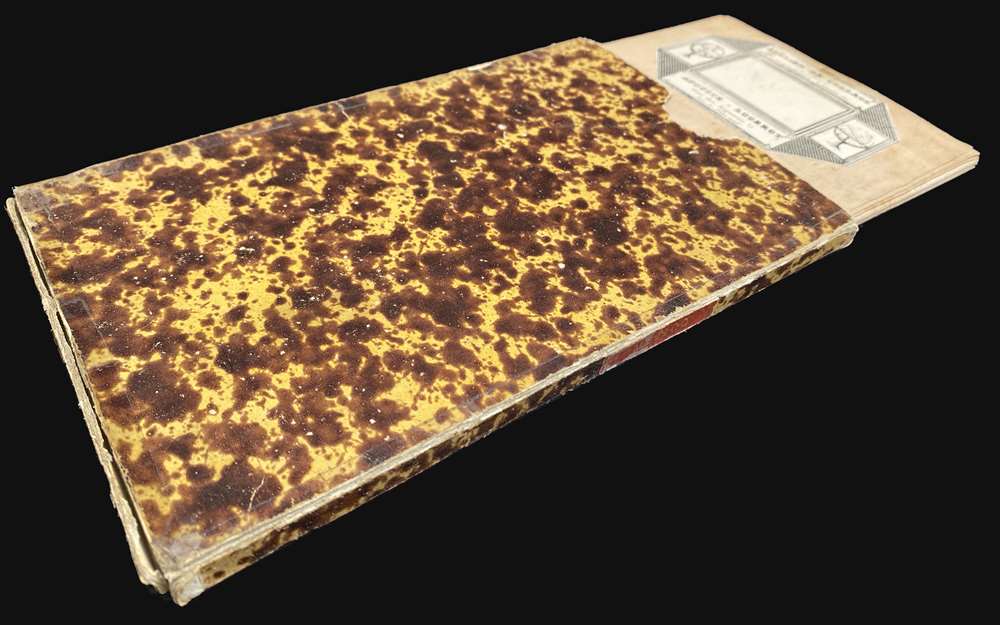 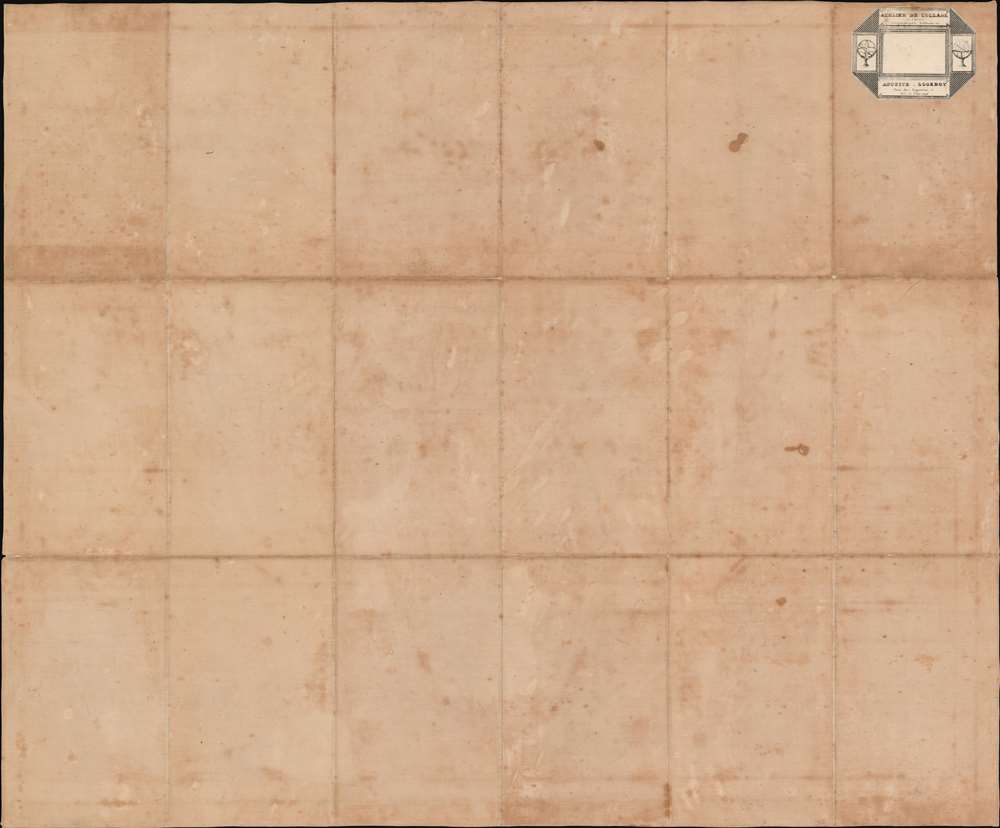 The rarest of the Texas 'Treaty Map' series.

The extremely rare 1851 edition of the Jean-Frédéric Rosa Map of Texas, California, and Mexico - considered the rarest of the 'Treaty Maps' used to settle the Mexico-Texas border between 1847 and 1853. This is grand map covering all of Mexico and much the southwestern part of the United States from the Pacific to the Apalachicola River and extending as far north as Great Salt Lake (Timpanogos). It was published in Paris by Jean-Frédéric Rosa on behalf of the Mexican Congreso General in anticipation of renewed negotiations over that part of the southwest that would eventually be annexed to the United States as part of the Gadsden Purchase. The map, generally based upon the 1826 Tanner map of Mexico, offers much of interest, including a recognition of American claims in Texas and Upper California, and multiple border configurations within Texas itself. It is the rarest of the three maps, along with the Tanner and Disturnell, used to negotiate the Gadsden Purchase.

This is one of three maps used to rectify border issues associated errors on the Disturnell maps of Mexico used to negotiate the Treaty of Guadeloupe-Hidalgo. It all goes back to El Paso. Most maps associated with the treaty can trace their origins to the Tanner Map of 1826, which erroneously located El Paso / Ciudad Juarez at roughly 32.2° N. El Paso is actually located at 31.765° N. This error effectively granted Mexico nearly 30,000 square miles of land that the Treaty of Guadeloupe Hidalgo suggested should be part of the United States. Moreover, this land was rich in minerals and was generally agreed to be the only practical route for a southern railroad to the Pacific. Once the treaty was formalized, neither Mexico nor the U.S. had any intention of backing down and border hostilities ensued. Nonetheless, neither side wanted another war, so in 1853, they once again sat down at negotiating tables. This time, according to Streeter, they consulted three maps, 'the Tanner map, the Disturnell map, and the Rosa' (Streeter Sale 233). These new negotiations resulted in the 1854 Treaty of Mesilla, in which the United States agreed to pay Mexico 15,000,000 USD for 45,000 square miles of territory in the Mesilla Valley. This was revised later in April of 1854, to 10 million USD for a more modest 29,670 square miles of land - and a U.S.-Texas border much as we know it today.

The borders of the Republic of Texas were in dispute from the earliest days of the Texan Revolution. The Republic-claimed borders followed the Treaties of Velasco between the newly created Texas Republic and Mexican leader, Antonio López de Santa Anna. The treaties established an eastern boundary following the 1819 Adams-Onís Treaty between the United States and Spain, which established the Sabine River as the eastern boundary of Spanish Texas and western boundary of the Missouri Territory. The Republic's southern and western boundary with Mexico was more nuanced. Texas claimed the Rio Grande del Norte as its western and southernmost border, while Mexico argued for a boundary much further east at the Nueces River. When Texas was annexed into the United States, the agreement followed the Republic claimed boundary, thus absorbing Mexican claimed territory as far west as Santa Fe. This escalated already existing tensions between the United States, the former Republic of Texas, and Mexico, ultimately triggering for the Mexican-American War (1846 -1848).

This map was first published in 1837, in Paris, by Jean-Frédéric Rosa. Rosa operated as a liaison between foreign language publications and the Spanish speaking Latin American market, with his business model primary being to translate works of various languages, but primarily French, into Spanish and publish under his own imprint. In this case, Rosa copied David Tanner's 1834 map of the same region. There are some differences beyond simple translation, including the removal of the statistical table, replacing the village of 'Cordova' with 'Ayotla', and engraving the Upper and Lower California boundary. A second edition was called for in 1851 to help settle boundary questions relating to the Treaty of Guadeloupe-Hidalgo. This edition, by far the rarer and more significant of the two, features numerous updates and revisions reflecting the Texan Revolution, the Mexican-American War, the Treaty of Guadeloupe Hidalgo, and additional political changes and surveys within Mexico. It was one of three maps consulted in relation to the Gadsden Purchase (1853) negotiations. There is some suggestion that there may have been a 1822 map of the same title, based upon Humboldt's map of 1810, but it is impossible that an 1822 map could be related, as the Tanner source map was not published until 1825.

This map is rare, by far the rarest of the so-called 'Treaty Maps'. The OCLC notes two examples of the 1851 edition. When Special Collections the University of Texas at Arlington acquired a copy of this map; see Compass Rose, Vol. XV II, No. 1 (Spring 2003), Katherine R. Goodwin wrote:

The Virginia Garrett Cartographic History Library in Special Collections holds materials relating to the cartographic history of Texas and, along with the Jenkins Garrett Library, is one of the most important repositories for documents and maps pertaining to the Mexican-American War of 1846-1848 in the United States. The library, prior to this acquisition, held editions of all the pertinent maps relating to the Treaty of Guadalupe-Hidalgo except the Rosa map. These holdings comprise a number of editions and states of the Disturnell map, the White, Gallaher and White map, and Henry S. Tanner’s maps, including that map’s cartographic sources. The addition of the Rosa map completes the sequence. The evolution of the treaty map is most important to the history of Texas and the United States, and especially to the history of the Mexican-American War of 1846-1848, the subsequent boundary disputes between the United States and Mexico, and the evolution of the boundaries of the state of Texas. Special Collections is proud to add the Rosa map to its collections for research and study.

Examples of the 1837 edition are noted at the Bancroft Library, the Benson Latin American Collection at the University of Texas at Austin, and the DRT Library at the Alamo. Tulane University holds another example of the 1851 edition. We are aware of a one other in private hands.

Frédéric-Guillaume Rosa (1780 - March 4, 1833) was a Parisian bookseller and publisher active in the early to middle 19th century. He is extremely significant as the primary artery for the book and map trade between Latin American capitals in Mexico and Argentina, and publishing centers in Europe. Rosa was born in Wissembourg, Bas-Ruin. He apprenticed as a bookbinder, in time earning considerable prestige in Parisian publishing circles. In 1812, he acquired the inventory of French bookseller Brigitte Mathey (1767 - 18??), for the bargain price 32,000 Francs. On October 1, 1812, he was formally patented as a Paris bookseller opening a shop in the publishing entrepôt of the Palais-Royal, and another on Rue Bussy. Although he began as a general publisher and bookseller, Rosa recognized an underserved market in Latin America, particularly Argentina and Mexico. Rosa's son, Jean-Frédéric Rosa (18?? - September 16, 1872), made sales trips to Mexico starting in 1824, when he established a relationship with the famous Mexico City bookseller, Mariano Galván Rivera (1791 - 1876). The firm published and exported Spanish-language titles, legal works, maps, and translations - mostly through Galván. This relationship continued until 1841, when Frédéric-Guillaume's grandson, Jules-Marie Rosa (Julio Rosa; 1812 - 18??), opened his own bookshop in Mexico City at Alcaicerías 28. The Rosas developed extensive contacts among the political, legal, and intellectual elite in Mexico, Santiago de Chile, Buenos Aires and Bogotá. Their original bookstore was located at Palais-Royal et Rue Montpensier n° 5, but closed in February 1830, when Frédéric-Guillaume declared his Paris bookshop bankrupt. Nonetheless, after Frédéric-Guillaume's death in 1833, Jean-Frédéric Rosa continued to prosper. He published several important maps of Mexico on behalf of the Mexican Congreso General in 1837 and 1851. In the 1845 he was sued in civil court for violating the copyright of Girardin Lefèbvre in the publication of a Spanish translation of Leccionses de Química. He lost the lawsuit and the ensuing penalties forced him to look for partners. His first partners were Pierre-Adolphe Auzou (1799 - 1872) and Charles-François Henry Gérard, with whom he established 'Rosa, Auzou et Cie' in 1846. This firm was dissolved in 1847 when Auzou pulled out, and for 2 years, Rosa and Gérard operated as 'Rosa et Cie.' From June 1, 1849 to July 1, 1859, when Adolphe-Émeri Bouret (November 28, 1816 - March 25, 1876), bought out Gérard, forming a joint-stock company as ' Libraría de Rosa, Bouret, et Cía'. Another mysterious partner 'Mr. Gerard' joined the firm thereafter but was bought out in 1853. In November of 1854, the firm acquired the lucrative contract to represent Hachette in Mexico City. Later in the 1870s, they opened a new Paris shop in 6th arrondissement bookseller redoubt Rue Visconte. This firm initially operated as 'Libraria de Rosa, Bouret, et Cía', but Jean-Frédéric died in 1872. After his estates was settled in 1874, Adolphe-Émeri Bouret partnered with his son, Charles-Adolphe-Henry Bouret (Paris, November 27, 1841 - October 8, 1892), to operate the firm as 'Bouret et Fils'. Heirs of the Bouret occupied no. 23 until at least the 1960s. Learn More...

Very good. Folds into original slipcase. Dissected and laid down on original linen, which is stable.