1914 Travelers Insurance Map of Mexico and the U.S. Occupation of Veracruz 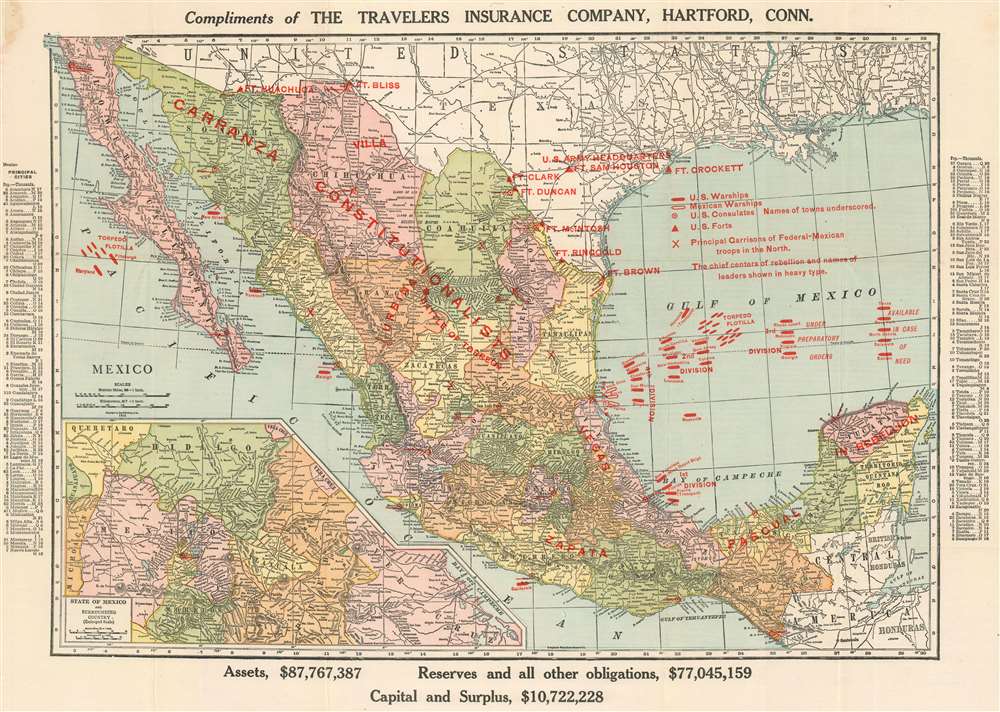 1914 Travelers Insurance Map of Mexico and the U.S. Occupation of Veracruz

Highlights the American invasion of Veracruz and hints at a possible larger invasion.
$850.00

This is a 1914 Travelers Insurance Company and Rand McNally map of Mexico during the Mexican Revolution (1910 – 1920) highlighting the American expedition to Veracruz in reaction to the Tampico Affair, in which ten American sailors had been detained by Mexican revolutionary forces. The map, intended for American customers of Travelers, was meant to assure investors that their insured assets in Revolutionary Mexico were protected. Red overprinting explains the situation in Mexico and identifies which factions controlled which parts of Mexico. Areas controlled by Venustiano Carranza, Jose 'Poncho' Villa, and Emiliano Zapata, all important figures in the Mexican Revolution, are labeled, as are all the garrisons of Mexican federal troops. U.S. forts along the U.S.-Mexico border are also highlighted using the red overprinting, reinforcing the notion that the United States was protected against the chaos to its south. Intriguingly, most of the overprinting alluding to the invasion at Veracruz is directed mostly at Tampico (see more on the so-called 'Tampico Affair, below) instead of toward Veracruz, which is farther south. However, the three vessels that were involved in the first landing at Veracruz are labeled accurately, indicating that, in fact, the large naval force in the Gulf of Mexico was meant as a show for Travelers Insurance customers that their investments would continue to be protected, even by the U.S. government.

Foreign investment in Mexico had flourished during The Porfiriato, a period of Mexican history from 1876 – 1911 dominated by General Porfirio Díaz. While he was in power, Díaz believed that it was necessary to suppress any opposition and maintain order to reassure foreign entrepreneurs that investing in Mexico was safe. The Mexican Revolution ignited because of questions surrounding who would succeed Díaz. Díaz was challenged by Madero in the 1910 presidential election, but lost a rigged election, and launched an armed revolt. After violence broke out in northern Mexico, a deal, called the Treaty of Ciudad Juarez, was brokered that resulted in Díaz resigning and going into exile. Madero was elected in 1911. By the summer of 1913, Francisco Madero had abandoned most of the popular rhetoric that had won him the presidency. Instead of nurturing the support of fellow revolutionaries, with whom he had ousted Porfirio Díaz, Madero was bound by the Treaty of Ciudad Juarez, which guaranteed that the essential structure of the Díaz regime remained in place. This meant that, instead of employing the revolutionary armies, they were sent home and Madero utilized the Federal Army to try and keep the peace. This, and his choice not to maintain important policies concerning land reform, led to the resumption of insurrections led by Zapata and Pascual Orozco. This map reflects this situation: a new president, Madero, finding himself on the opposite side of the revolutionaries. Madero resigned late in 1913, but was murdered, along with his vice president, on their way to prison.

The U.S. invasion and occupation of Veracruz was ignited by the Tampico Affair. The incident, which some characterize as a 'minor political misunderstanding', erupted following the arrest at gunpoint of a group of American sailors by Mexican revolutionaries. A detachment of U.S. Navy vessels was deployed off the coast of Tampico, under orders to protect American citizens and investments in the area. The sailors in question had been sent by their commanding officer to retrieve a supply of gasoline from a pier on the coast but were captured by a group of Zaragoza's men. The American commanding officer demanded an apology, which was immediately granted by Zaragoza himself, and the men were back on the U.S. Navy vessel within an hour. But the commanding officer viewed the incident as an attack on American sovereignty and demanded a twenty-one-gun salute of the American flag as a formal act of apology. The Mexican government balked at this and stated that the verbal apology and the arrest of the offending militiaman was 'ample satisfaction'. Wilson, and the rest of the American government, disagreed, which led to the dissolution of diplomatic relations and the American invasion and occupation of Veracruz.

The U.S. Occupation of Veracruz

American troops landed in Veracruz on the morning of April 21, 1914, from the USS Prairie, Florida, and Utah, all of which are specifically labeled here. The occupation would last seven months, and a total of nineteen Americans were killed and seventy-two wounded. Casualties on the Mexican side were estimated at between 150 and 170 soldiers killed, 195 and 250 wounded, and an unknown toll was taken on the civilian population of the city.

This map was originally designed and printed by Rand McNally and then repurposed by the Travelers Insurance Company as a broadside advertisement concerning the Mexican Revolution in 1914. At least two editions of this piece were published, with the present being the second edition. The first, which was published at least a year earlier, does not include the many U.S. Navy vessels in the Gulf of Mexico or in the Pacific. This edition appears to be quite rare, as we have been unable to locate any other known examples.

Very good Light wear and toning along original fold lines. Blank on verso.
Looking for a high-resolution scan of this?