1841 Lapie Map of the Republic of Texas and Mexico 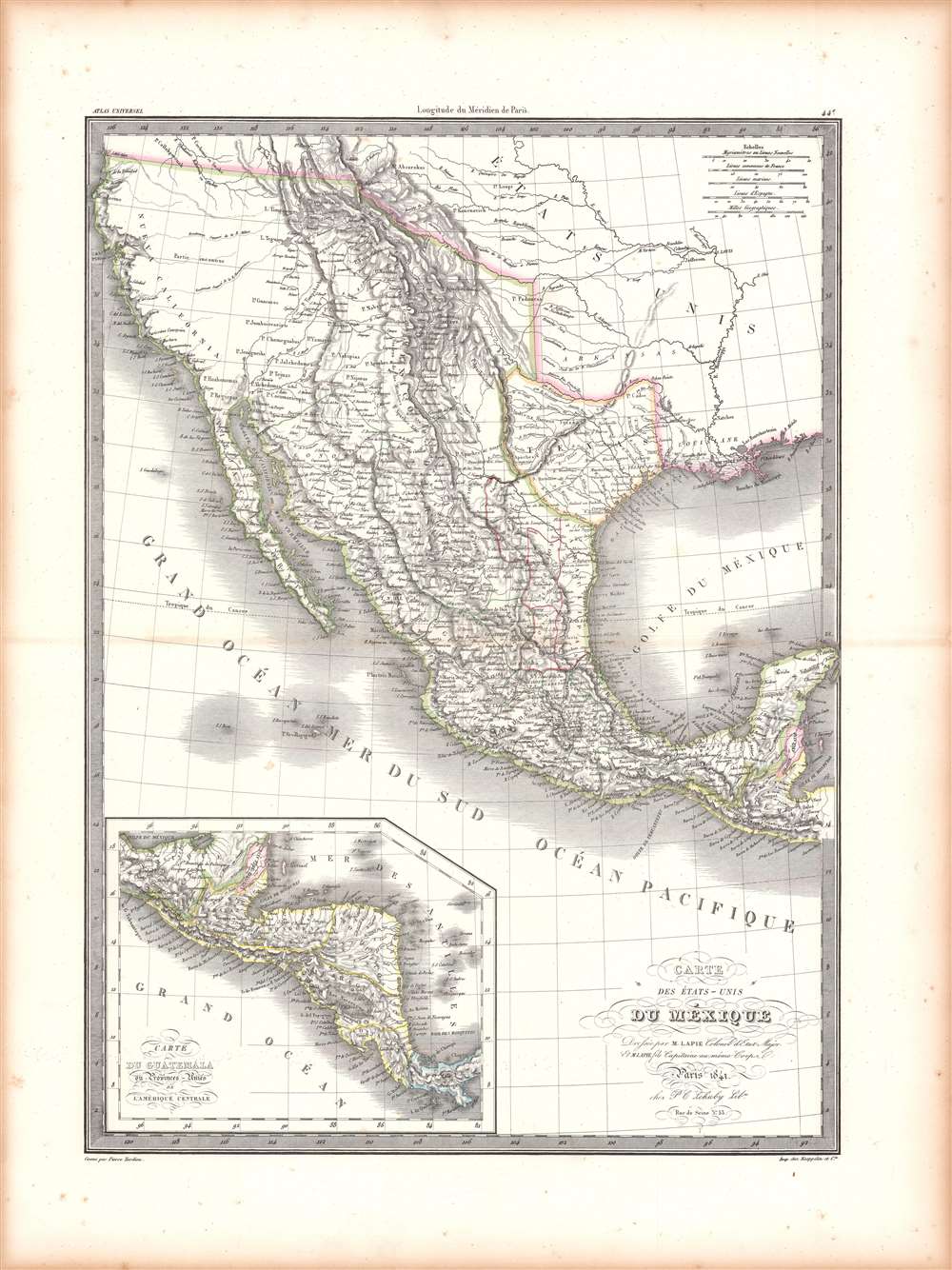 1841 Lapie Map of the Republic of Texas and Mexico

This is an 1841 Pierre and Alexandre Lapie map of Mexico and the southwestern United States, one of the earliest non-American maps to include the Republic of Texas. The map depicts the region from the Pacific Ocean to the Mississippi River and from the Oregon Territory to the Yucatan Peninsula and the Pacific Ocean.

Mexico is bordered in green, with its borders extending from the Yucatan to the Oregon Territory encompassing all of California and the other southwestern states. Several American Indian tribes are identified in northern Mexico, including the Apache. A large portion of the region between the Rocky Mountains and the Pacific Coast is labeled as 'unknown'. Both the Great Salt Lake, identified as Lake Timpanogos, and Utah Lake, labeled as Lake Teguayo, are illustrated following Humboldt. The apocryphal Buenaventura River is also included and is illustrated as connecting from Lake Teguayo to the Pacific Ocean, the final incarnation of the long-sought River of the West, a speculative alternative to the Northwest Passage. In the United States, only rivers are illustrated, and a handful of Indian tribes are referenced. An inset map of Central America is situated in the lower-left corner and depicts the region from the Yucatan to Chagres, Panama (labeled Colombie), including a territory labelled Colonie Anglaise, the beginnings of Belize.

The Republic of Texas was a short-lived nation established in March of 1836 when it seceded from Mexico. Following the independence of Mexico from Spain, the American Stephen Fuller Austin led a group of 300 Empresarios to settle Texas, near Austin, where they received a grant from the Mexican government. As more Americans moved to Texas, resentment and strife began to build between the American settlers and Mexican authorities. This and other factors ultimately led to the Texan Revolution in 1835 and the declaration of Texan independence in 1836. Texas remained an independent republic until it joined the United States ten years later in 1846.

The borders of the Republic of Texas were in dispute from the earliest days of the Texan Revolution. The Republic claimed borders according to the Treaties of Velasco between the newly created Texas Republic and Mexican leader Antonio López de Santa Anna. These treaties established an eastern boundary following the 1819 Adams-Onís Treaty between the United States and Spain, which established the Sabine River as the eastern boundary of Spanish Texas and western boundary of the Missouri Territory. The Republic's southern and western boundary with Mexico was more nuanced. Texas claimed the Rio Grande del Norte as its western and southernmost border, while Mexico argued for a boundary much further east at the Nueces River. When Texas was annexed into the United States, the agreement followed the boundary claimed by the Republic, thus absorbing Mexican-claimed territory as far west as Santa Fe. This escalated already existing tensions between the United States and Mexico, ultimately triggering the Mexican-American War (1846 - 1848).

These frequent changes required cartographers to be adept in updating maps with the latest information. Here, the Republic of Texas is bordered in yellow, highlighting its existence. The basic layout of the 1838 edition of this map (see 'Publication History and Census' below) is maintained, though there is one subtle but notable change - the eastern boundary of the Texas Republic is shifted from the Sabine River to the Neches River. In the 1842 edition of the map, the whole Texas portion of the copperplate was entirely reworked, mostly to update placenames.

When Texas seceded from Mexico on April 21, 1836, it immediately sought legitimacy through diplomatic appeals to major world powers - most of which were in Europe. Most European powers were reluctant to recognize the self-proclaimed Republic until it became clear that it could survive and what diplomatic ramifications, if any, formal recognition might yield. Nonetheless, France under King Louis-Phliippe recognized Texas on September 25, 1839. This act may have been partially trade inspired, and partially motivated by French antipathy towards Mexico following the First French Intervention or Pastry War (1838 - 1839). Recognizing Texas diplomatically allowed France to open official trade channels, particularly for cotton, a vital commodity in Europe and an increasing cause of tension between France and Britain. Moreover, the recognition of Texas accelerated the destabilization of Mexico, increasing the probability that any colonial aspirations the French may have had in seizing California would be successful. Twenty years later, Emperor Napoleon III tried to take advantage of the American Civil War and install a friendly monarchy in Mexico, a brazen misadventure which ultimately failed while engendering tremendous opposition in both Mexico and the United States.

This map was created by Pierre and Alexandre Lapie, engraved by Lallemand, and re-engraved by Pierre Tardieu for publication in the 1838, 1841, and 1842 editions, and printed by Kappelin et Cie. It appeared in the Lapies Atlas Universel de Géographie Ancienne et Moderne published by P.C. Lehuby. The 1841 edition of this map is especially rare; it is not found cataloged separately in the OCLC is very scarce to the market, while only three institutions hold the entire 1841 atlas.

Good. Some discoloration along the centerfold and sporadically throughout. Toning along the edges.
Looking for a high-resolution scan of this?