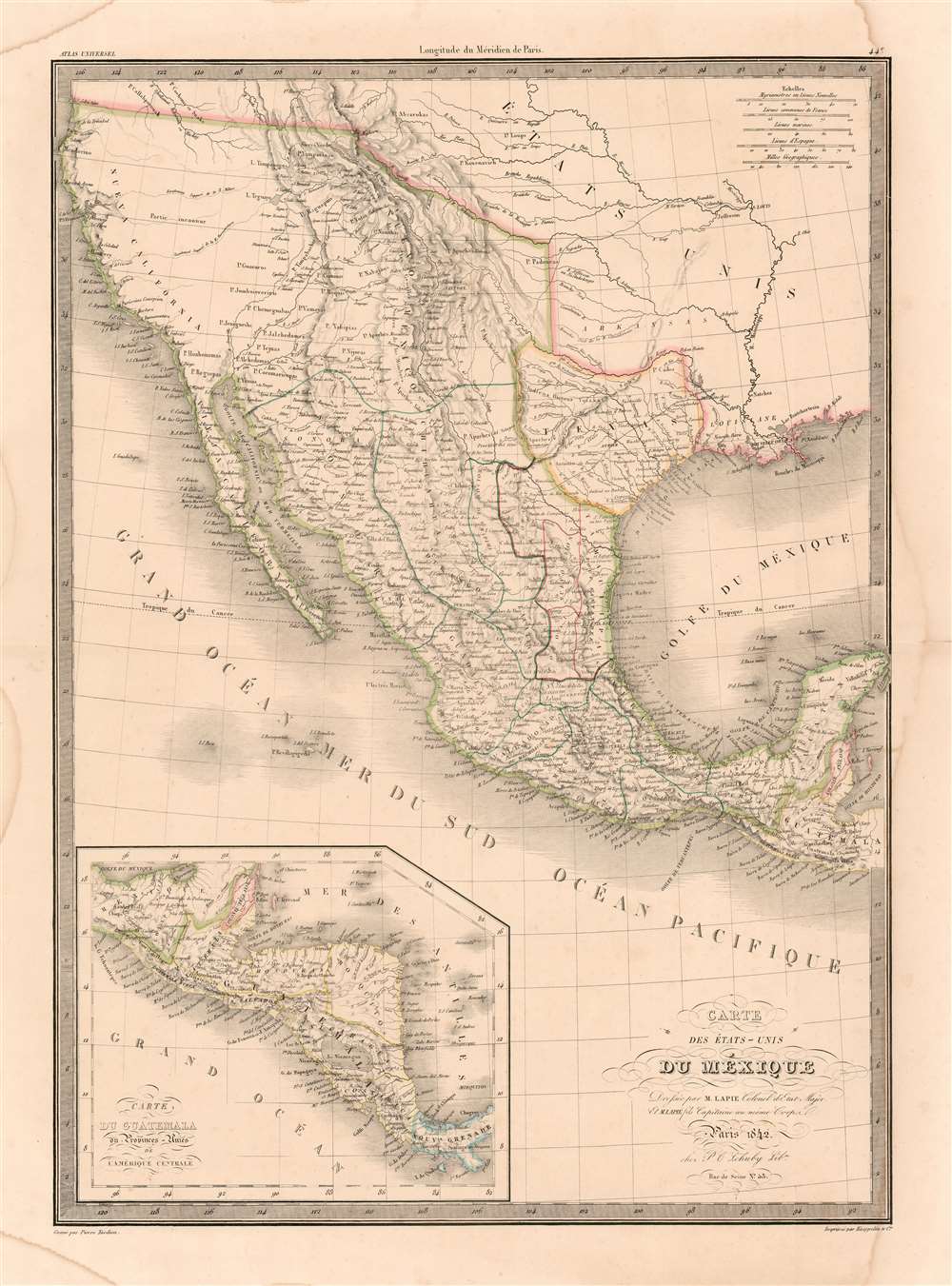 This is an 1842 Pierre and Alexandre Lapie map of Mexico and the southwestern United States, which is one of the earliest non-American maps to include the Republic of Texas. The map depicts the region from the Pacific Ocean to the Mississippi River and from the Oregon Territory to the Yucatan Peninsula and the Pacific Ocean. The Republic of Texas is bordered in yellow, highlighting its existence. The map’s Texas detail is not limited to this superficial change, however: the whole Texas portion of the copperplate has been entirely reworked. Not only have the borders of the erstwhile nation been added, but also the whole area occupied by it has been updated, removing obsolete place names and replacing them with those in current use, including Austin, Houston and Nashville.

Mexico is bordered in green, with its borders extending from the Yucatan to the Oregon Territory encompassing all of California and the other southwestern states. States within Mexico are labeled and bordered by thin lines of varying colors to allow for easy differentiation. Cities and towns throughout Mexico are identified, including Mexico City, Cuernavaca, Veracruz, and Oaxaca, with Santa Fe, San Francisco, Monterey, Santa Barbara, and San Diego marked in northern Mexico, now the United States. Several Indian tribes are identified in northern Mexico, including the Apaches. A large portion of this region between the Rocky Mountains and the Pacific Coast is labeled as 'unknown'. Both the Great Salt Lake, identified as Lake Timpanogos, and Utah Lake, labeled as Lake Teguayo, are illustrated following the example of Humboldt. The apocryphal Buenaventura River is also included and is illustrated as connecting from Lake Teguayo to the Pacific Ocean, the final incarnation of the long-sought River of the West, a speculative alternative to the Northwest Passage. In the United States as it existed in 1838, only rivers are illustrated, and a handful of Indian tribes are referenced. An inset map of Central America is situated in the lower left corner and depicts the region from the Yucatan to Chagres, Panama (labeled Colombie).

This map was created by Pierre and Alexandre Lapie, engraved by Lallemand, and re-engraved by Pierre Tardieu for publication in the 1838 and 1842 editions of their Atlas Universel de Géographie Ancienne et Moderne published by P.C. Lehuby. The 1842 edition of this map is rare. OCLC lists examples in only four institutions: the Biblioteca Nacional de España, the University of Nevada at Las Vegas, the University of Texas at Arlington, and U.C. Berkeley..

Good condition. Marginal mends to fold, and some waterstaining not affecting printed area.