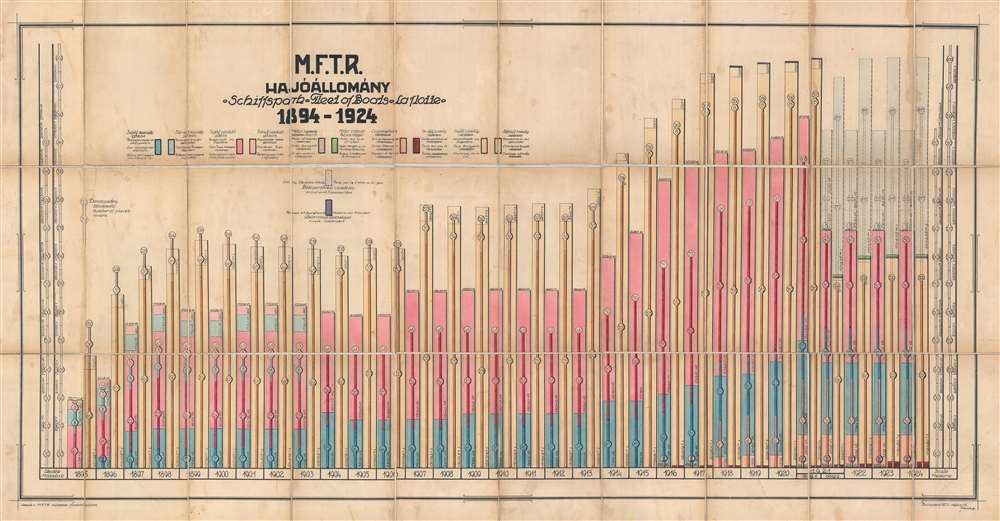 Scathing critique on the effects of the 1921 Treaty of Trianon on Hungarian private shipping companies.
$1,750.00

This is a 1924 Hungarian River and Sea Shipping Company, Magyar Folyam – és Tengerhajózási Részvénytársaság (M.F.T.R.), multilingual chart depicting their shipping fleet between 1894 and 1924. A scathing critique of the Treaty of Trianon (the peace treaty signed between the Allied powers and Hungary to end World War I), the chart effectively displays the vast reduction in its fleet because of the treaty. The key, which is situated above the chart itself, is in Hungarian, German, French, and English and utilizes twelve different colors to illustrate different types of vessels. The 'ghost fleet', or those ships lost due to the peace treaty, is illustrated from 1921, because the Treaty of Trianon went into effect on July 31 of that year.

Each year depicted on the graph, from 1895 until 1924, is illustrated by two different bars (with the exception of 1921, which is divided into the fleet before and after the treaty went into effect). The bar on the left of each year illustrates the number of passenger steamers and tugs operated by the M.F.T.R., and whether they owned the vessel in question or chartered it. The bar on the right illustrates the number of motor barges (two types), screw steamers, tank barges, other barges, and steamers with loading capacity. Of these types of vessels, the M.F.T.R. only chartered barges. The number at the top of each bar indicates the total number of vessels catalogued in that bar. It is unclear exactly what the scales present on both the left and right side represent. We are fairly certain that the inner scale represents total tonnage carried over the course of a year. However, the outer scale is less clear. The symbol used on that particular scale does not match the currency used in Hungary in 1924. It is worth stating that Hungarian finance and banking were thrown into chaos following World War I, which lends credence to the argument that the symbol used for this scale represents a foreign currency. We have been unable to definitively identify which currency this symbol represents, but we are fairly certain that this scale represents the total value of shipments carried over the course of a year.

This chart was published by the Hungarian River and Sea Shipping Company in Budapest in 1924.

The Hungarian River and Sea Shipping Company (Magyar Folyam – és Tengerhajózási Részvénytársaság (M.F.T.R.)) (1895 - 1950) was a Hungarian river and ocean shipping company established and sponsored by the Hungarian government which transported cargo along the Danube River. Founded on January 24, 1895, the company was sponsored with capital from the Hungarian General Credit Bank and the Hungarian Clearing and Currency Exchange Bank. The company had a 20-year contract with the Hungarian government which provided it with 400,000 Hungarian Forints annually. The ships of the national rail company (MÁV) were transferred to the M.F.T.R., which also gradually acquired the boats of other small companies. These acquisitions allowed it to emerge as a serious competitor of the DDSG, a major shipping company on the Danube sponsored by the Austrian government. Between 1895 and 1917, the M.F.T.R. transported on average 595,000 passengers and 557,000 tons of goods per year. The company owned 38 passenger boats, 54 cargo steamboats, 389 barges and two tankers in 1918. However, the company was ‘entirely broken’ following Hungary’s defeat in World War I. A serious blow was dealt to shipping companies by the peace treaties, and the Danube treaty signed on June 23, 1921 egregiously curtailed the M.F.T.R.’s ability to conduct business. The economic crisis of the 1930s did not help matters, and led to the M.F.T.R. entering into partnerships with several other shipping companies in order to remain in business. World War II had a favorable effect on the company, allowing it to rebuild and expand its fleet. The M.F.T.R. was dissolved after the war and turned into the Hungarian-Soviet Shipping Company, which was established on March 30, 1946. Learn More...

Very good. Dissected and mounted on linen in 30 panels. Light soiling. Blank on verso.
Looking for a high-resolution scan of this?