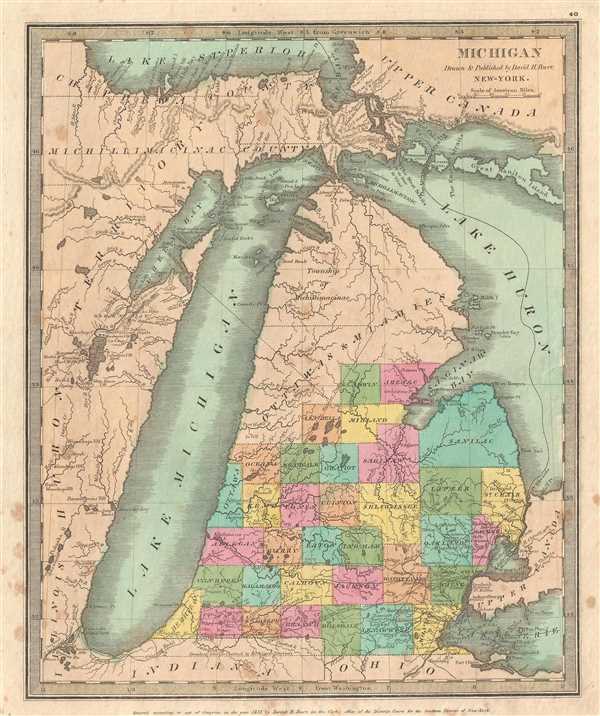 A very attractive and rare 1835 first edition example of Burr's map of Michigan, including Lake Michigan in full. Burr's map covers from the southern shores of Lake Superior to the Indiana / Ohio border and from Chicago to Lake St. Clair, covering thus the state of Michigan, c. 1831, in full.

The northern parts of the state are loosely organized into various first nation territories. The 'Ottawas' and 'Miamies' are identified as is the 'Township of Michillimacinac.' The upper peninsula is divided between Michillimacinac County and Chippewa County. The western shore of Lake Michigan, roughly from Green Bay to Brochais River, is identified as Huron Territory. Throughout these lands American Indian villages are identified with both care and precision.

At the southern tip of Green Bay, Fort Howard and the settlement of Green Bay is noted. This area was settled extensively by New England farmers following the 1832 end of the Black Hawk War, making this one of the earliest maps to delineate the Green Bay's borders.

At the southern tip of Michigan Burr notes a territorial dispute between Michigan an Indiana. Michigan claimed territory extending far enough south to include the entire eastern shore of Lake Michigan. This territory was in fact part of the original Michigan charter as of 1805. When Indiana applied for statehood in 1816, Territory Delegate Jonathan Jennings proposed the border be moved further north to give Indiana a port on Lake Michigan – then a major artery of trade.

A similar dispute further east had just been resoled between Michigan and Ohio. Again, according to the original 1805 Michigan charter, the border extended well south of the present location. This led to the Toledo War or Michigan-Ohio War of 1835 – 1836, which ultimately resolved the issue in the favor of Ohio. Ohio thus gained control of the Toledo Strip and Michigan, in exchange, received part of the Upper Peninsula. Of course, none of these events had occurred when this map was printed, and so here, Burr has decided in favor of Michigan with enough conviction that he does not even bother to acknowledge the dispute.

This is the 1835 first edition of this important map which has become quite scarce. It was copyrighted in 1831 by David H. Burr, but not published until the atlas was released in 1835.