1858 Colton Map of Michigan and Wisconsin 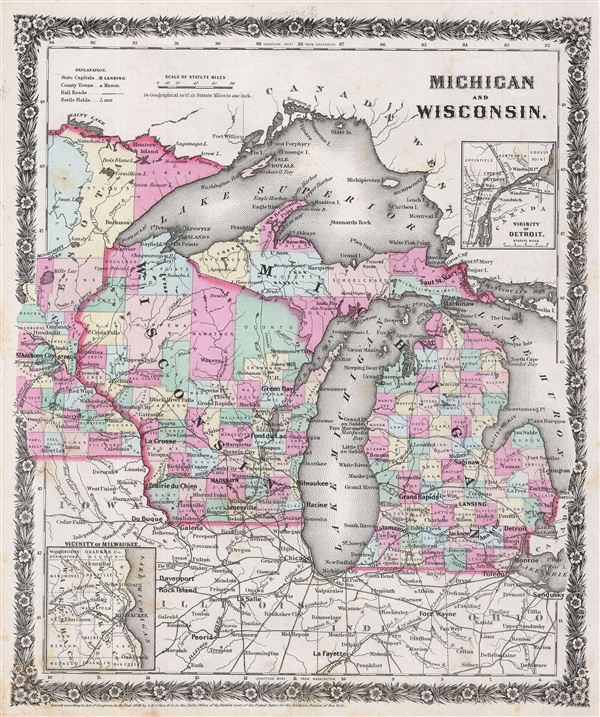 1858 Colton Map of Michigan and Wisconsin

A rare example of Colton's 1858 map of Michigan and Wisconsin. Centered on Lake Michigan, the map covers the states of Michigan and Wisconsin showing parts of Minnesota, Iowa, Illinois, Indiana and Ohio. Also shows Lake Superior, Lake Michigan, Lake Huron and part of Lake erie. Insets in top right and bottom left corners show the vicinity of Detroit and the vicinity of Milwaukee respectively. This beautiful hand colored map is a copper plate engraving, featuring a delicate floral style border only used by Colton in this particular atlas. It offers fine detail throughout with elevation rendered by hachure. Divided and color coded according to county, shows major roadways and railroads as well as geological features such as lakes and rivers. The legend on the top left corner indicates locations for State Capitals, County Towns, Rail roads and Battle Fields of 1832 Black Hawk War.

The Black Hawk War of 1832 was a battle fought between the United States state militia and the Native American tribes Sauk and Fox. The leader of the Native American tribes was a Sauk warrior Black Hawk, who hoped to resettle on the land that was ceded to the United States in a disputed 1804 treaty. The battle resulted in the eventual imprisonments of Black Hawk and other leaders after their initial escape. The war is most remembered for giving young Abraham Lincoln his brief military service.

Dated and copyrighted to J. H. Colton, 1859, this map is by G. Woolworth Colton and the text is by Richard Swainson Fisher. Published from Colton's 172 William Street Office in New York City an issued as part of the1859 edition of Colton's Illustrated Cabinet Atlas and Descriptive Geography.