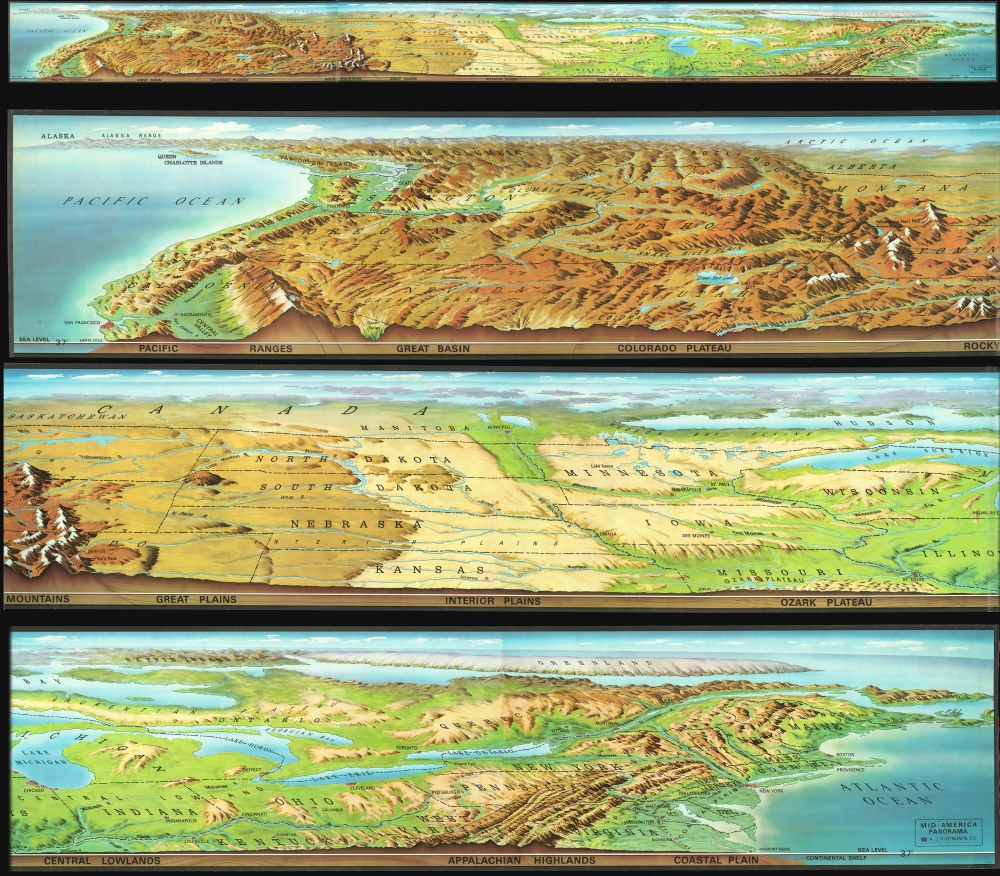 An enormous 18-foot long c. 1969 panoramic view of the northern half of the United States by the Nystrom company. The map / view extends from Atlantic to Pacific, and includes states and territories from San Francisco, Kansas, and the Chesapeake north as far as the Arctic. Although Canada is included, the perspective recedes north of the U.S. border such that this territory is only vaguely distinguishable. The main view focuses on a pictorial representation of the terrain and topography, with shading indicating relative elevation. States are illustrated in outline and important regions, cities, topographical features, and National Parks are noted. Along the bottom a cross-section profile illustrates elevation at roughly 37° N latitude.

This view was published by A. J. Nystrom of Chicago around 1969. The image above features one full-length image (top) and three sections, divided so as to make online presentation practical. We have been able to identify only one other example, in the collections of David Rumsey / Stanford University.

Albert John Nystrom (August17, 1873 - December 24, 1956) was an American publisher active in Chicago during the middle part of the 20th century. Nystrom was the son of Swedish immigrants who emigrated to the United States in 1870. Nystrom studied at Bryant and Stratton Business College, Chicago, from 1888 - 89 and Northwestern University School of Commerce from 1898 - 1900. In 1903 he became the American agent for Edinburgh map publishers W. and A.K. Johnston, founding the A. J. Nystrom Company. While Nystrom initially sold Johnson maps, he soon began printing and selling his own educational maps and charts. Nystrom pioneered maps for children of all ages, offering large print simplified maps for younger children - a novel idea at the time. The firm became extremely prominent and Albert Nystrom retired to Fort Lauderdale in the 1950s. in 1966, ten years after Albert's death, the firm was old to Field Enterprises. In 1973, it was acquired by Herff Jones, and in 2014 by the Social Studies School Service, under whom it remains active. Learn More...