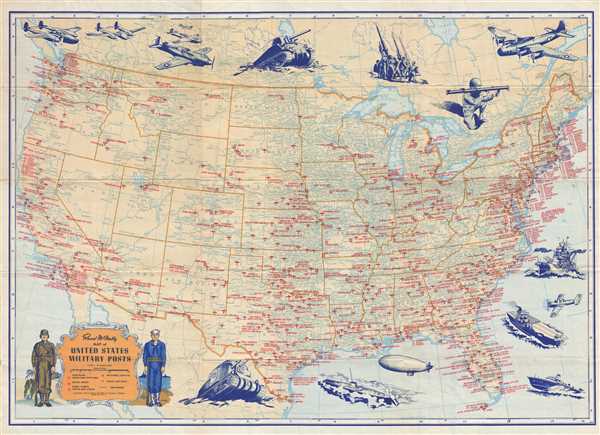 Labels all of the military installations in the continental United States from coast to coast.

This is a 1944 Rand McNally map of the United States which labels all the military installations from California to New York. The map depicts the United States from the Pacific Ocean to the Atlantic Ocean and from Canada to Mexico. The map differentiates between the different types of military posts by using different symbols. Airfields, bases, and stations are illustrated by small airplanes, while naval bases are indicated using an anchor inside a circle. Army camps, forts, and posts are labeled by a square with a dot at the center. Airfields and army installations are present in all 48 states, while naval bases are only located along the East, West, and Gulf coasts. On a more basic level, myriad cities and towns are labeled throughout and the rail network is illustrated and labeled from coast to coast. Several national parks are illustrated and labeled, including Yellowstone National Park and Grand Canyon National Park. The whole is surrounded by a series of military-inspired vignettes, including fighter aircraft, a Sherman tank, an anti-aircraft gun, a soldier with a bazooka, and B-17 Flying Fortress (one of the most celebrated aircraft of the war) along the top border. In the lower right corner, illustrations of a battleship, an aircraft carrier, and a PT boat (like the one commanded by President John F. Kennedy). A decorative title cartouche, including the legend, is situated in the lower left corner, and is flanked by a navy enlisted man and an army enlisted man.

This map was created and published by Rand McNally and Company of Chicago in 1944.