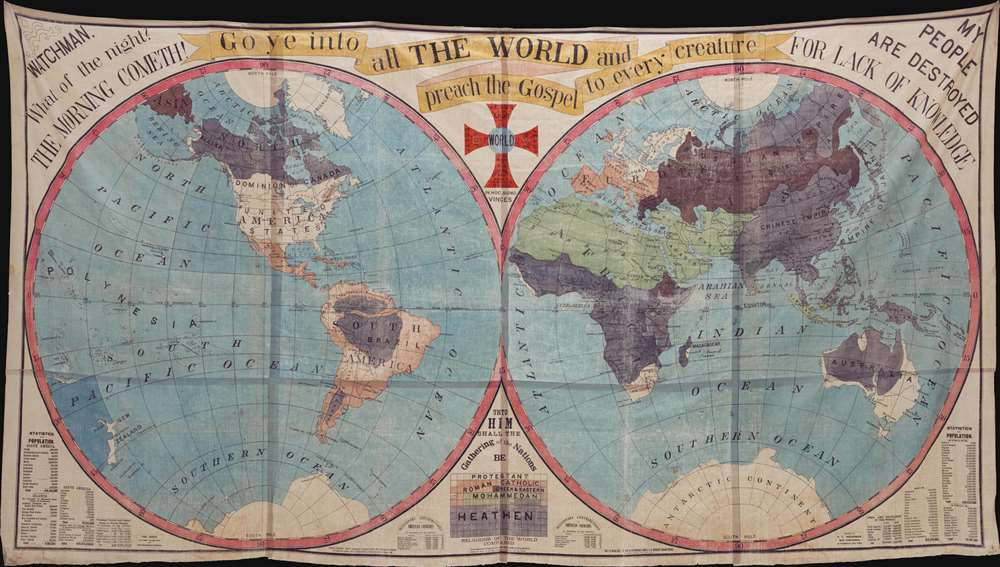 The largest missionary map we have seen!

The largest missionary map we have seen, this staggeringly massive production was published in 1905 by Truman D. Collins and known euphemistically as the 'Collins Map.' Printed on waxed linen cloth, several sheets of which have been stitched together to form a whole, the map presents the world in two large hemispheres. Color coding divides the world on religious grounds, illustrating the lands of various faiths, including Protestants, Roman Catholics, Greek and Eastern [Churches], Jews, Mohammedans, and Heathens. In addition, there are religious slogans, Biblical quotes, and statistical charts. The map was intended for 'big-tent' evangelical meetings where it would be used as a didactic tool to promote conversion and explain missionary ideology.

It the second half of the 19th century, it was commonly believed that the Christianization of the world was a pre-requisite for the Second Coming of Christ. Maps like this, which were issued for the proselytization effort, tended to simply global religious diversity. They present an easily digestible and preferred model of religion; wherein large geographical blocks can be assigned to this or that faith. This approach allowed for propagandization of the missionary effort itself, selling the successes of missionary work not only to those being converted, but also at home to future missionary generations and financial backers.

Large format cloth maps like this began appearing around 1845, when the rise of commercial lithographic printing in the United States made their production both practical and economical. Unlike copper plate printing process, lithographic printing could easily imprint images on cloth. This was of particular value for missionary work, which often involved harsh field conditions that would quickly destroy any similarly sized paper map.

The map is first mentioned in a manual published by the Missionary Society in 1897,

Through the Genericity of Mr. T. D. Collins the Missionary Society has been able to publish a large and beautiful wall map of the world. It was prepared at great expense and would ordinarily cost much more than the amount for which it is now offered. It is in two styles and can be had for $5 or $`2, according to the quality of cloth and coloring, of Missionary Secretaries, 150 Fifth Ave, New York. Every Chapter should have one.

After the initial 1897 publication, the map was issued in several subsequent updated editions, all of which were promoted and widely distributed by the Missionary Society of the Methodist Episcopal Church. Nonetheless, today this map is rare. It does not appear in the OCLC and we are aware of no other examples of the present edition.

This map owned jointly with Vetus Carta and Neatline.

Truman Doud Collins (March 7, 1831 - April 16, 1914), known as 'Teddy' was born a farmer in Cortland, New York and educated at the Cortland Academy. Graduating, he took work with the Engineering Corps of the Binghamton and Syracuse Railroad, hen under construction. Despite promotions and success with the railroad, he moved to Forest County Pennsylvania in 1853, initially working as a lumberman, but later acquiring property and opening the T. D. Collins Mill. Through various subsequent business and partnerships, he became extremely wealthy. Sometime in the 1860s he was converted by Methodist Reverend Hicks in a Beaver Valley revival meeting. He became extremely interested in foreign missionary work, donating generously to build churches. The became the Chair of the World Christianity and Mission Society. Perhaps inspired by his old railroad survey work, he published a large format cloth map intended for missionary work, known as the 'T. D. Collins Map.' Collins died in 1914 in Nebraska, Pennsylvania.


Edward Clark Bridgman (October 28, 1849 - 19??) was a printer and businessman based in New York City in the late 19th and early 20h centuries. Edward Clark was born in South Carolina, the son of Erastus Clark Bridgman (1817 - 1870), also a New York map printer, and Carline Joan Kingsley. Edward married the heirs Evelyn Tilden Low in 1884. Like his father, Edward was a publisher and lithographer of maps, charts, and other prints. His offices were located at 84 Warren Street. The date of his death is unknown.

Very good. Even toning. Some edge wear. On linen.