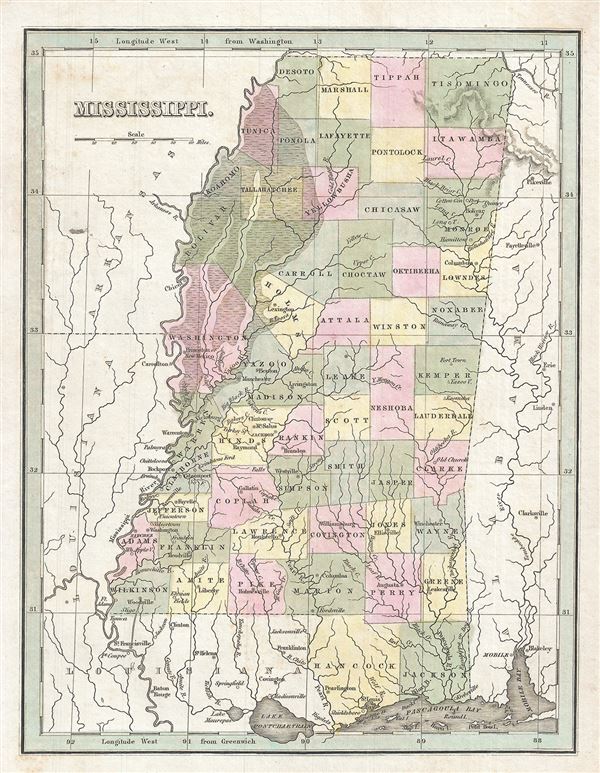 This fine map of Mississippi was printed in 1835 by the important American mapmaker T. G. Bradford. It depicts the state of Mississippi as well as parts of neighboring Alabama, Louisiana and Arkansas. The map shows fine detail, noting rivers, lakes, towns, cities and a host of other topographical features, with relief shown by hachure. Identifies Mobile Bay in Alabama. The Mississippi River Delta is beautifully rendered. Offers color coding at the county level.

This map was published in Thomas G. Bradford's 1835 Comprehensive Atlas Geographical, Historical and Commercial.Â  Bradford's atlas, published in 1835 was an important work on many levels.Â  First, it was one of the first American atlases to follow an encyclopedic format, offering readers extensive geographical and statistical tables to supplement the maps themselves.Â  Second, it was published in Boston and influenced the city's rise as a publishing center later in the 19th century (at the time most publishing in the United States was restricted to New York and Philadelphia).Â  Third, this atlas was the first to contain a separate and specific map showing the Republic of Texas.Â  Fourth and finally, Bradford's atlas in some instances broke the Euro-centric mold regarding atlas production.Â  Among other things, Bradford focused his atlas on the Americas and abandoned the classical decoration common in European atlases in favor of a more informational and inherently American approach.

Bradford published this atlas in several editions and with various partners.Â  The first edition was published by William D. Ticktor and did not contain the iconic Republic of Texas map (although we have in fact seen Ticktor examples with a Texas map, suggesting, against conventional wisdom, that there may have been two Ticktor editions).Â  The second official edition, published in the same year by the American Stationers Company, was the first to contain the Republic of Texas map, which is based on Austin's map, with two pages of descriptive text.Â  A third edition was issued in 1836, also by American Stationers (though still dated 1835), and contained an unaltered Republic of Texas map with only a single page of descriptive test.Â  A fourth edition appeared later, possibly 1837, and included an updated and revised map of Texas that replaces the old Mexican land grants with new inchoate counties. The maps from this atlas are an important addition to any collection focusing on early American cartography and Republic of Texas cartography.

All maps in this atlas, though not specifically noted as such, were most likely engraved by G. W. Boynton of Boston, who also engraved mostÂ  of the maps for Bradford's later publication.