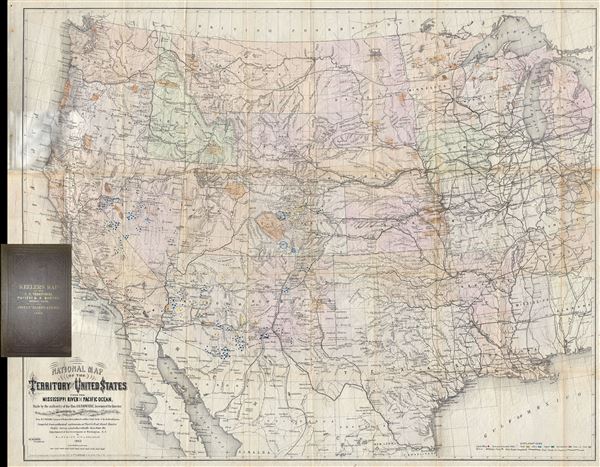 An exceptionally scarce variant of a cornerstone map of the American west and the finest of its era.

National Map of the Territory of the United States From The Mississippi River To The Pacific Ocean. Madeby the authority of the Hon. O. H. Browning Secretary of the Interior. In the Office of the Indian Bureau Chiefly For Government Purposes under the direction of the Hon. N.G. Taylor, Commisr. of Indian Affairsa and Hon. Chas E. Mix Chief Clerk of the Indian Bureau.
1868 (dated)     30 x 38 in (76.2 x 96.52 cm)     1: 3801600

A map of the utmost importance and scarcity, this is William J. Keeler's 1868 pocket map of the American west, considered the 'the largest, finest and most detailed map of the West as it was then known.' The map covers from Detroit and Cincinnati westward to the Pacific and from the Canadian border to the southern tip of Texas, showing in its vastness the great American west with its mineral treasures, American Indian reservations, rivers, mountains, fortifications, and rail lines laid out in spectacular detail.

Keeler's map has an unusual publication history that requires priority placement in our description to understand this map's scarcity and significance. Though presented as a government map, this map is in fact the product of private enterprise - though no doubt informed via Keeler's access to the official records of Indian Bureau. A noted by Martin and Martin (47)

In 1867, seeking to take advantage of public interest in all aspects of the West, but particularly the railroad routes, William J. Keeler, an engineer working in the Indian Bureau, published a large, attractive map of the entire country west of the Mississippi.

Keeler first issued this map in 1867 on a much larger format but covering a smaller area. The first edition, most examples of which were prepared as presentation copies for government officials and railroad magnates, remains quite common and measures some 47.5 x 57.5 inches. The limited market for presentation pieces no doubt encouraged Keeler to issues to two new editions in 1868 on a reduced scale. While it is not clear which of the second editions came first, or if they were published simultaneously, they are distinguishable by their size. One, as noted by Wheat, is comparatively small at 28.5 x 22 inches and bears the same title as the 1867 variant but, given its proportions, is significantly less detailed. Ours, a first edition thus, is most likely the rarest of the three being presented in pocket format and weighing in somewhat in the middle size-wise at 30 x 38 inches. Though not identified in Wheat's Transmississippi West, an example of the pocket map edition offered here does appear in David Rumsey's archive. Rumsey's assessment is apt in defining the scarcity of the present example (our own research yields only two examples of this edition being offered publically in the last 30 years):

This is the reduced issue with slightly more coverage in the east and more progressed railroad development. The detail is, of course, less, due to the smaller scale, and the minerals are not colored. Nonetheless it is still an excellent map of the west of its time, and is far more scarce than the larger issue of 1867.

All variants of the Keeler map, as suggested by Wheat, offer cartographies of hope in the incredible potential of the American West. The map notes mineral deposits throughout with color coding identifying gold, silver, copper, quicksilver (mercury), iron, and coal discoveries. This incredible mineral wealth, more than any other factor, was driving American interests and commerce ever westward.

Keeler offers a superb general overview of the western railway networks, inclusive of those extant, those in progress, and those proposed. This map is, according to the publisher,

the only one published which shows the whole of the great Pacific Railroad routes and their projections and branches, together with all other railroads in the States and Territories bordering on the Mississippi on both sides showing at a glance the eastern connections of those Pacific Roads with the existing railroad systems of the country.

Not surprisingly, given Keeler's employment at the Indian Bureau, this map offers an exceptional overview of American Indian lands. Throughout the map countless American Indian reservations are both textually identified and highlighted in color. The two largest reservations, immediately noticeable at the center of the map are the Uintah Valley Reserve, just southeast of Great Salt Lake, and the Tabequache Utes Indian Reservation, in western Colorado. Both reservations housed subgroups of the Ute nation. Thus this is one of the earliest maps to chart the American Indian Reservation system. As described by Susan Schulten in Mapping the Nation, 'The advent of the reservation system gave Native American life an explicitly spatial dimension, and this map starkly charts the collision of two civilizations.'

This is a rare opportunity to own a scarce variant on a cornerstone map of the West.

William J. Keeler (fl. c. 1856 - 1868) was an American civil engineer active during the second half of the 19th century. He is an elusive figure, and little is known of his birth and death dates, places, or early education. He appears in 1856, already working as a civil Engineer in Buffalo with the Erie Canal. In 1862 he received a civilian appointment, and possibly a honorary military rank, to work as an engineer at the Washington Naval Yard. He may also have worked at the Naval Yard in New York (Brooklyn). He was decommissioned in 1864 or 1865, after which he traveled west where he is recorded as an engineer with the Leavenworth, Lawrence and for Gibson Railroad Company. In 1865 he is also mentioned as working with the Union Pacific. In 1866 he was the chief engineer of the Kansas and Nesho Valley Railroad. He appears to have been employed with the department of the Interior Indian Bureau in by 1866 and/or 1867. He released his National Map of The Territory of The United States from the Mississippi River to the Pacific Ocean, one of the most important maps of the American west to appear in the 19th century, 1867. Although based upon government and railroad surveys, the map was a private publication and went through several subsequent editions, reissues, reformatting, and republications. Following the publication of the 2nd edition in 1868, Keeler seems to disappear from all record. Learn More...

Very good. Attached to original binder - discolorations at left center are due to attempting to scan around the binder and are not present on the actual map. Slight wear on original fold lines. Else very clean.