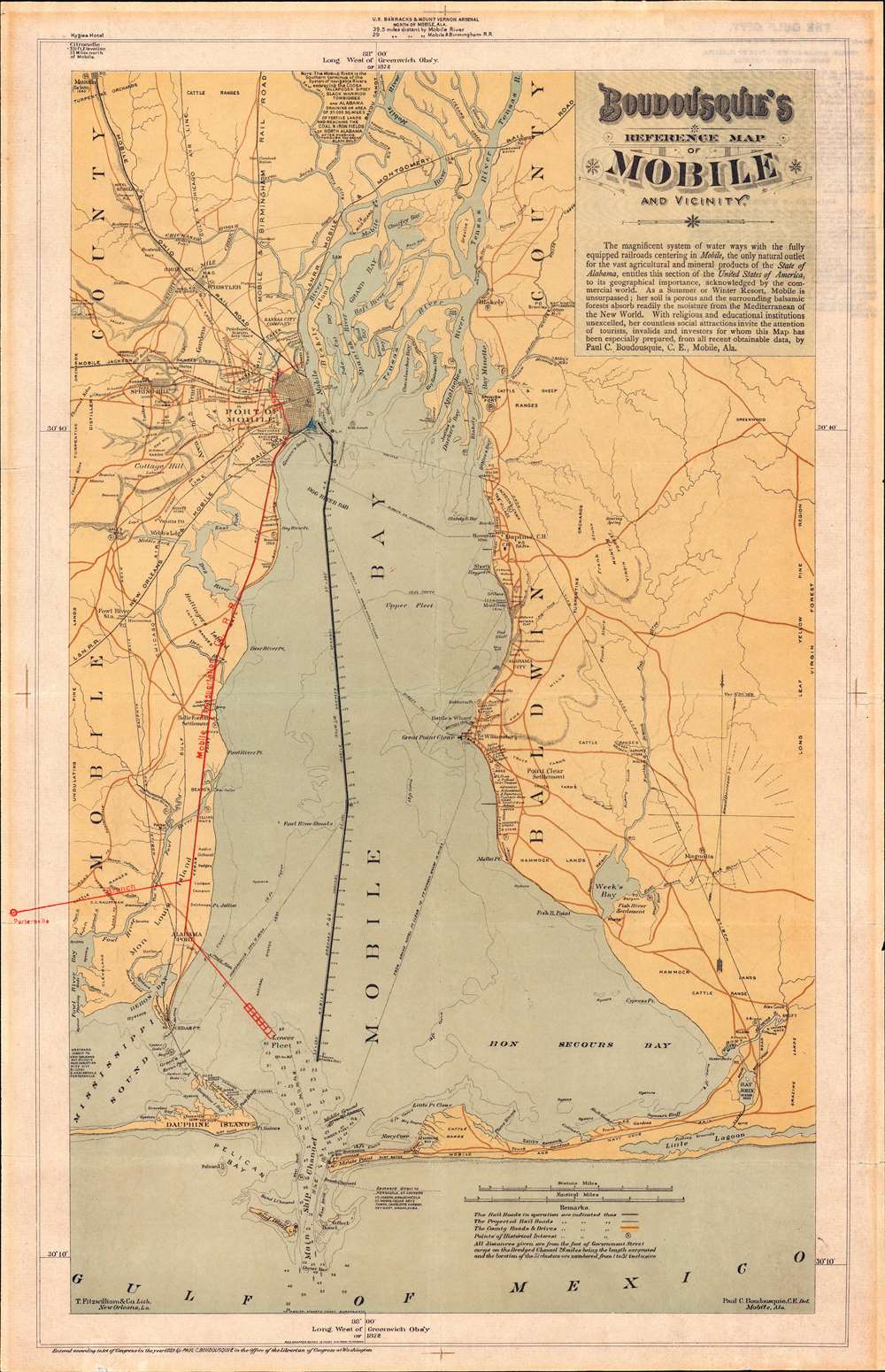 A map of the utmost rarity, this is Paul Charles Boudousquie's map of Mobile Bay. It is considered by Mobile historian Caldwell Delaney, head of the Museum of the City of Mobile for 40 years and author of Howes' U.S.iana (1650 - 1950), the rarest of maps delineating Mobile. It is moreover, the only significant locally published map of Mobile Bay to appear in the 19th century. The map covers all of Mobile Bay as well as the Mobile River Delta, the city of Mobile, and much of the surrounding country. The newly dredged ship channel is boldly denoted through the center of the Bay. This map appeared during a period of revived optimism following years of social, political, and economic decline.

The defeat of the Confederacy during the American Civil War (1861 - 1865) and the subsequent Reconstruction Era (1863 - 1877) was particularly hard on Mobile. Not only had the city lost much of its workforce (slaves), it's primary export, agricultural products from the interior, all but vanished with the dissolution of plantation culture and the general mayhem caused by the war. The city's civil administration flipped from pro-Confederacy Democrat to anti-slavery Republican, leading to deep political divisions, corruption, general waste, and overwhelming debt. Moreover, Mobile always had the problem that the shallow Bay was not accessible to deep-draught vessels - and as ships got bigger and heavier, and the silting process increased, this problem compounded. The arrival of the railroad to Alabama further sidelined the city, as the east-west route through the interior largely sidelined the port.

The Cut - A Remarkable Engineering Feat

The Federal government stepped in to save the city. Bringing in a Corps of Engineers team, including Boudousquie, to dredge a deep-water channel from the main ship entrance to the bay to Mobile Port - illustrated here with a bold black line. An astounding engineering achievement, the cut was seventy yards wide, eighteen feet deep at low water, and nearly twenty-three miles long. The city governors further encouraged maritime trade by eliminating all port fees, with the exception of the pilotage charge, allowing the city to promote itself as the 'only free port in the United States.' The completion of 'the Cut' in 1884 ushered in a new era of optimism for Mobile, leading to an overall stabilization in the city. By 1903, the city's once staggering debt was fully repaid.

A New Era of Optimism

Certainly, the potential of 'the Cut' and the overall economic optimism in Mobile was not lost on Boudousquie, who wrote on the map,

The magnificent system of water ways with the fully equipped railroads centering in Mobile, the only natural outlet for the vast agricultural and mineral products of the State of Alabama, entitles this section of the United States of America, to its geographical importance, acknowledged by the commercial world. As a Summer or Winter Resort, Mobile is unsurpassed; her soil is porous and the surrounding balsamic forests absorb readily the moisture from the Mediterranean of the New World. With religious and educational institutions unexcelled, her countless social attractions invite the attention of tourists, invalids, and investors for whom this Map has been specially prepared, from all recently obtainable data.

This map was drawn by Paul Charles Boudousquie in Mobile, Alabam, while he was a Civil Engineer working on improvements to Mobile Harbor. It was printed by T. Fitzwilliam and Company in New Orleans, at the time the largest lithographer in the Gulf littoral. The map is rare, with the OCLC citing only 3 examples, those being located at the University of Alabama (partial, heavily damaged), the Western University of Toronto, and the Wisconsin Historical Society - this last example may be digital as the cataloging is unclear. Extremely scarce.

Paul Charles Boudousquie (August 18, 1847 - January 17, 1925) was an architect, map publisher, and civil engineer based in Mobile, Alabama in the latter part of the 19th century. Boudousquie was born in New Orleans. During the American Civil War (1861 - 1865) he served as an engineer for the Confederate Army. Afterwards he joined the Corps of Engineers and worked extensively on improvement projects throughout the Gulf littoral. From 1870 to 1900 he was an Assistant Engineer with the Corps of Engineers working on the improvement of Mobile harbor. In his elder years he served as Chair of Arts at the Spring Hill Jesuit College. He died at 77 in Battles, Alabama. Learn More...


Thomas W. Fitzwilliam (January 1 1833 - December 22, 1917) was a Irish stationer, lithographer, and bookseller based in New Orleans in the late 19th and early 20th centuries. Fitzwilliam was born County Wexford, Ireland, and emigrated to the United States in 1850. Three years later, in 1853, he relocated to New Orleans. Census records from 1950 list him as an accountant for B. M. Normand and Henry Stetson. Around 1860, with a 4,000 USD loan from fellow Irishman Thomas O'Donnell, he established open T. Fitzwilliam and Company. Initially a Blank Book Manufacturer and Stationer, with a retail location at 76 Camp St., New Orleans. He expanded in 187, founding a lithographic press. When the Southern Lithographic Company collapsed in 1885, Fitzwilliam inherited near monopoly in New Orleans, and indeed, throughout the Gulf littoral. His son Thomas William Fitzwilliam, took over the business after his father's death in 1917. In 1929, The firm was eventually acquired by Garcia Stationery Company. Learn More...