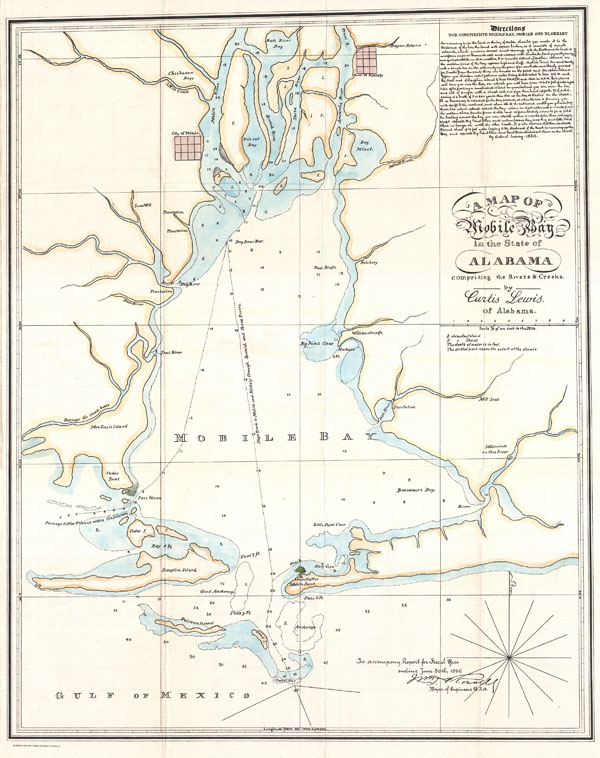 This is an unusual 1896 map or nautical chart of Mobile Bay, Alabama by Curtis Lewis. Originally drawn in 1820, this example is a reissue printed in 1896 for William Trent Rossell's congressional Report. This chart, which predates the work of the U.S. Coast Survey in this region, offers detailed sailing instructions, depth soundings, and other nautical data for all of Mobile Bay and parts of the Gulf of Mexico. Includes the City of Mobile as well as the town of Blakely.

William Trent Rossell (October 11, 1849 - October 11, 1919) was born in Alabama on October 11, 1849, the son and grandson of Army officers, and he graduated third in the United States Military Academy class of 1873. Commissioned in the Corps of Engineers, he served until 1880 at Willets Point and as Assistant Professor of Engineering at the Military Academy. He then engaged in river, harbor, and fortification work in regions around Portland, Maine; Jacksonville, Florida; and Vicksburg, Mississippi. Rossell served in 1891-93 as the Engineer Commissioner on the three-member governing board of the District of Columbia. After briefly commanding the Battalion of Engineers, he led Mobile District for six years. He then supervised lighthouse construction and repair in the New York area and, later, Ohio River improvements. He was a member of the Mississippi River Commission from 1906 to 1913, as well as Central Division Engineer in 1908-09 and Eastern Division Engineer in 1909-13. He retired October 11, 1913, but was recalled to active service in 1917. He led the Third New York and Puerto Rico districts and was Northeast Division Engineer. He again retired in 1918. He died October 11, 1919, in Staten Island, New York. Learn More...

Phillips (America), p. 446.
Looking for a high-resolution scan of this?