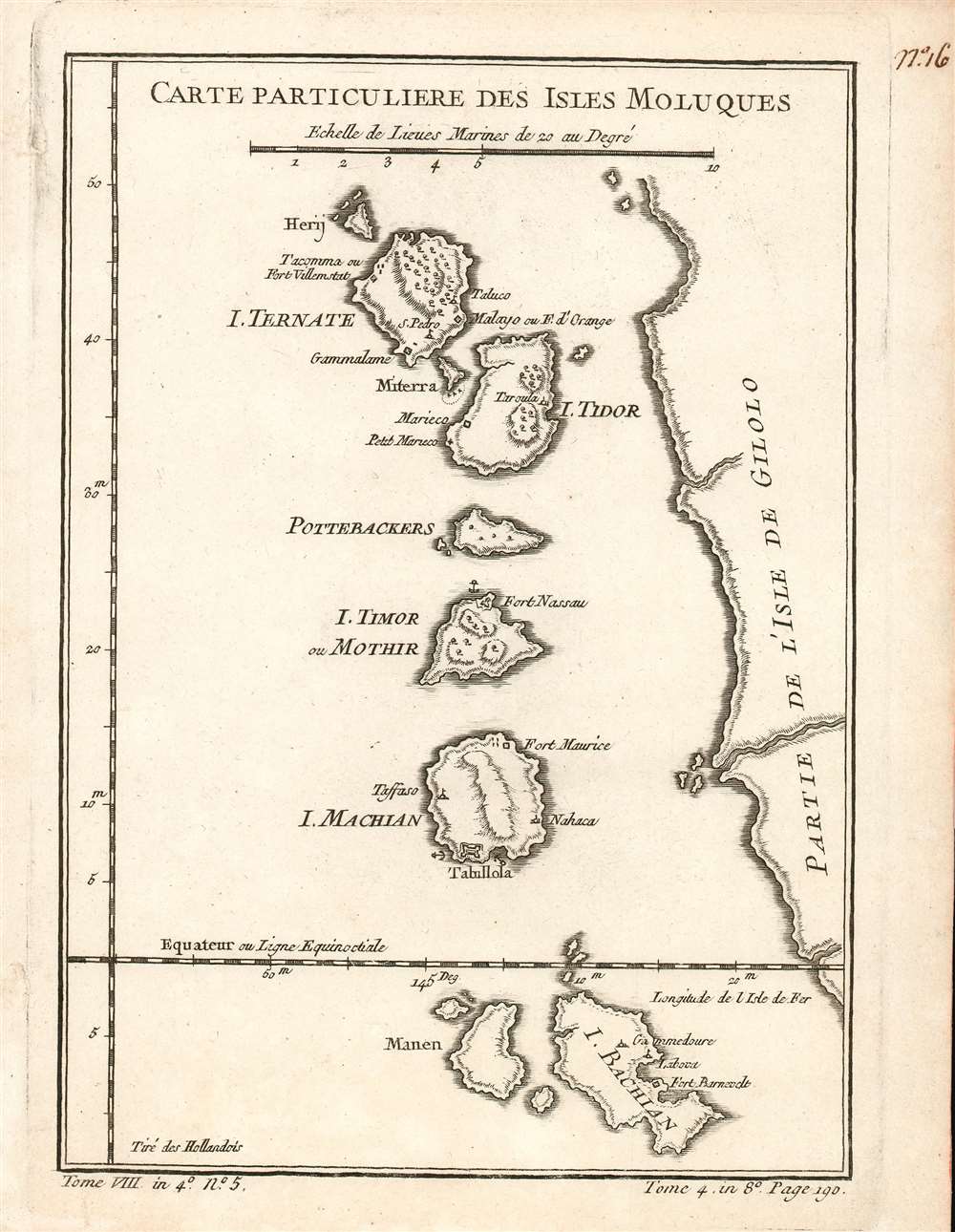 This is a beautifully engraved 1780 map of the Malaku Islands, or the Moluccas - also known as The Spice Islands. The string of islands, now part of eastern Indonesia, are shown along the west coast of the island of Halmahera, previously known as Gilolo (and so marked on the map.) Hiri Island, Ternate, Maitara, Tidore, Mare Island (Pottebackers) Moti Island (I. Timor, or Mothir) and Makian Island, are somewhat accurately delineated. Forts and settlements are noted on each island. At the southern extremity of the map, Kasiruta Island (Manen) and Bacan Island are recognizable. It is puzzling that between Makian and Bacan, the islands of Kaioa and Laluin have been omitted - but indeed, this is the case on maps of the Moluccas going back to the Age of Discovery. European explorers, arriving from a trans-Pacific voyage, seem to have coasted Halmahera/Gilolo exclusively from the north, having reached the islands north of New Guinea; this was the case with Magellan's survivors, Drake, and Le Maire. Hence Antonio Pigafetta's (c. 1491 - 1531) 1525 depiction of the Moluccas began with Ternate and ended with Machian; the 1630 Willem Blaeu (1571 - 1638) would do the same, adding Bachian as an inset. Hondius' 1633 map of the Moluccas added Bachian - in very schematic form, and too far north - as an island at the southern end of the chain. The great French geographer, Nicolas Sanson (1600 - 1667), chose this as his model. It appears that despite Bellin's having obtained a significantly better mapping of Bacan, he has been given no cause to question Sanson's placement of the island - or Sanson's naming of settlements and forts, which here is consistent both with the 17th century French geographer's map and its Dutch forebearer.

The separate map appears on the market from time to time but is somewhat neglected in institutional collections: OCLC lists perhaps twenty examples of this map in its various editions. La Harpe's Abrégé de l'histoire générale des voyages is well represented in institutions.