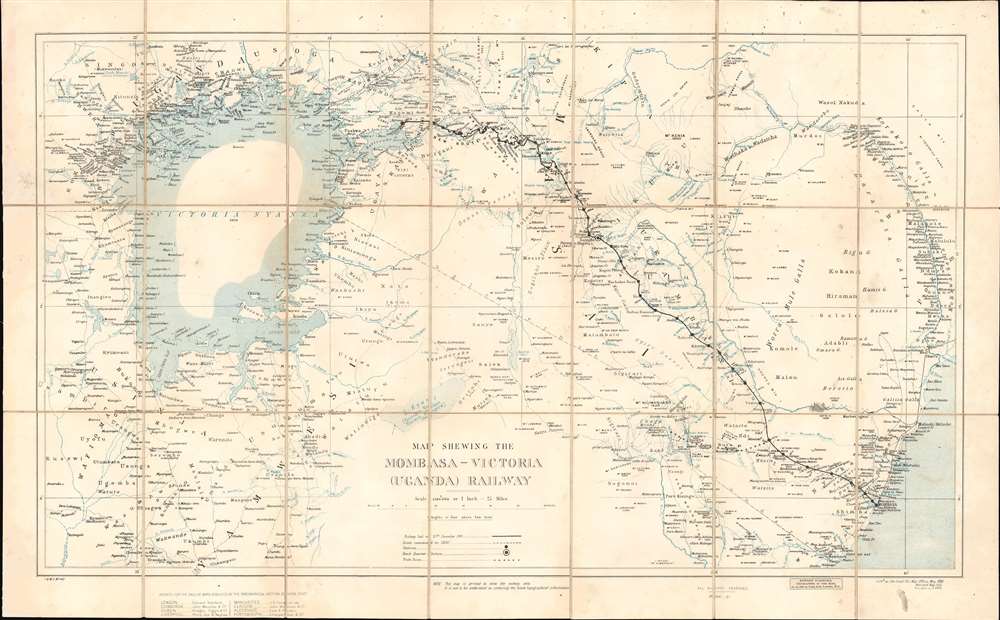 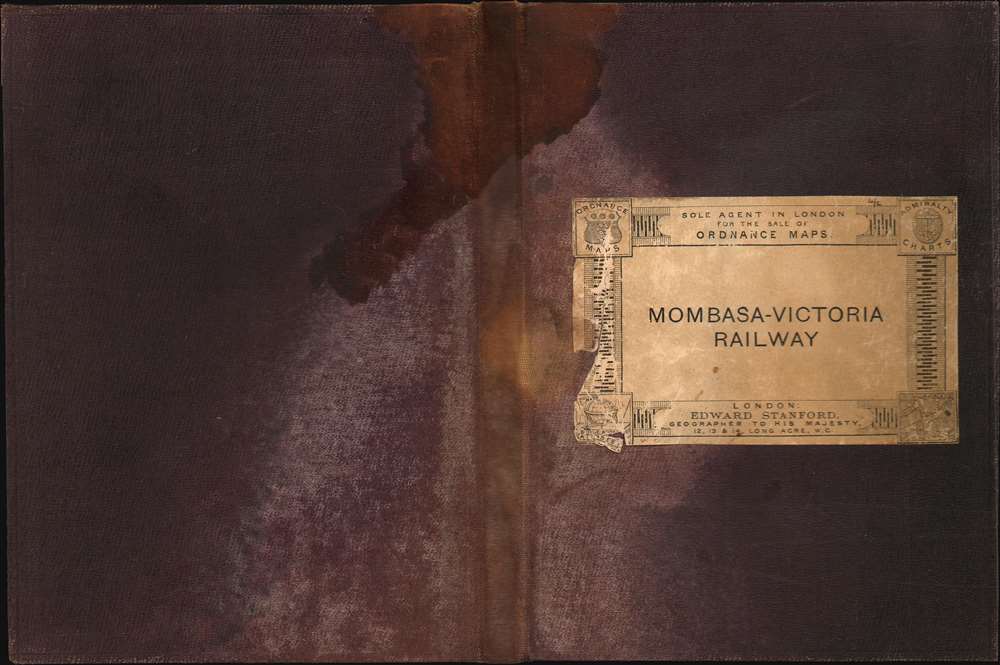 'An iron snake will cross from the lake of salt to the lands of the Great Lake.' - ancient Kikuyu prophecy
$950.00

A rare and significant 1903 War Office 'Scramble for Africa' map illustrating the course of the Mombasa-Victoria Railway. Generally known as the Uganda Railroad, for its destination, the line is marked here running through Kenya from the Indian Ocean, through Nairobi, to the Lake Victoria port of Kisumu, Uganda. The map's coverage extends from the western shores of Lake Victoria to the Indian Ocean and the Tana River, embracing the heart of modern Kenya. Mount Kilimanjaro is named and connected to the railroad via an overland trade route from the stop of Voi. Beyond the railroad route, the map names countless villages and focuses on inland waterways. The border with rival German East Africa (Tanzania) is noted, underscoring the significance of the completed railroad to strategic control of the region.

An ancient Kikuyu prophecy predicted 'an iron snake will cross from the lake of salt to the lands of the Great Lake.' Prophecy became reality in 1896, when the British began construction of an ambitious metre-gauge railway from the Indian Ocean port city of Mombasa to the Ugandan city of Kisumu, on Lake Victoria. The construction of the railroad was plagued by difficult terrain, infectious disease, and the man-eating lions of Tsavo. It also ran excessively overbudget, so much so that political critics in London dubbed it the 'Lunatic Express'. Nonetheless, by 1901, the line was complete and proved a strategic coup. The British used railroads as a logistical and tactical tool to assert 'Effective Occupation' during the Scramble for Africa. In this case, the Uganda Railway, as it came to be known despite running almost entirely in Kenya, opened the African Great Lakes region to economic and military development and proved to be the binding linchpin of British East African hegemony. From 1929, the line began running under the management of Kenya Railways as one of the world's great heritage railroads. Passing through some of Africa's most beautiful terrain, travel on the train became a luxury staple for the safari-set, carrying Theodore Roosevelt, among others. Today, although much faded from its colonial glory, the railroad remains little changed, using original tracks, moderately-well maintained original cars, old-world table services, and more.

The map is an artifact of the 'Scramble for Africa,' the series of late 19th and early 20th century occupations, usurpations, annexations, divisions, and land seizures by European powers in Africa, here specifically England, Germany, and France. The Scramble for Africa was mainly characterized by heightened occupation and direct ownership of colonial lands. Rivalries and treaties led to a number of new African states, many of which remain, but few of which paid heed to traditional boundaries or cultural distinctions. The Scramble culminated in the Berlin Conference of 1884, wherein European colonization of Africa was regulated and made official and the doctrine of Effective Occupation was introduced.

The 1884 - 1885 Berlin Conference adopted the Doctrine of Effective Occupation as a baseline for establishing and maintaining colonial claims. According to this doctrine, colonial powers needed to prove 'effective occupation.' This means they needed to establish the existence of treaties with local powers, show that their flags were being flown, build railroads and other infrastructure, or have active forts in the region. The doctrine led to increased European military and economic activity in Africa as colonizers sought to bolster their 'effective occupation' claims. While this, in part, led to the advancement of infrastructure in Africa, including the construction of modern facilities such as hospitals and railroads, it also led to more intensive direct ownership of colonial lands by Europeans and the exploitation of indigenous peoples.

This map was surveyed and first published by the War Office in May of 1899. It was revised in 1902, and again in 1903. The present example is the third state. It bears a pastedown advertising 'Edward Stanford', suggesting this map was sold at his establishment. This map is rare. It appears with multiple entries in the OCLC, but upon closer examination, these citations are e-editions digitized and propagated in 2017 by Adam Mathew Digital. We have identified at least one physical example located in the National Archives at Kew, London, likely the exemplar digitized in 2017. Original editions from 1903, as here, have no market history and are exceedingly rare.

Good. Some foxing at margins and soiling along old folds. Dissected and laid on linen. Accompanies original binder.