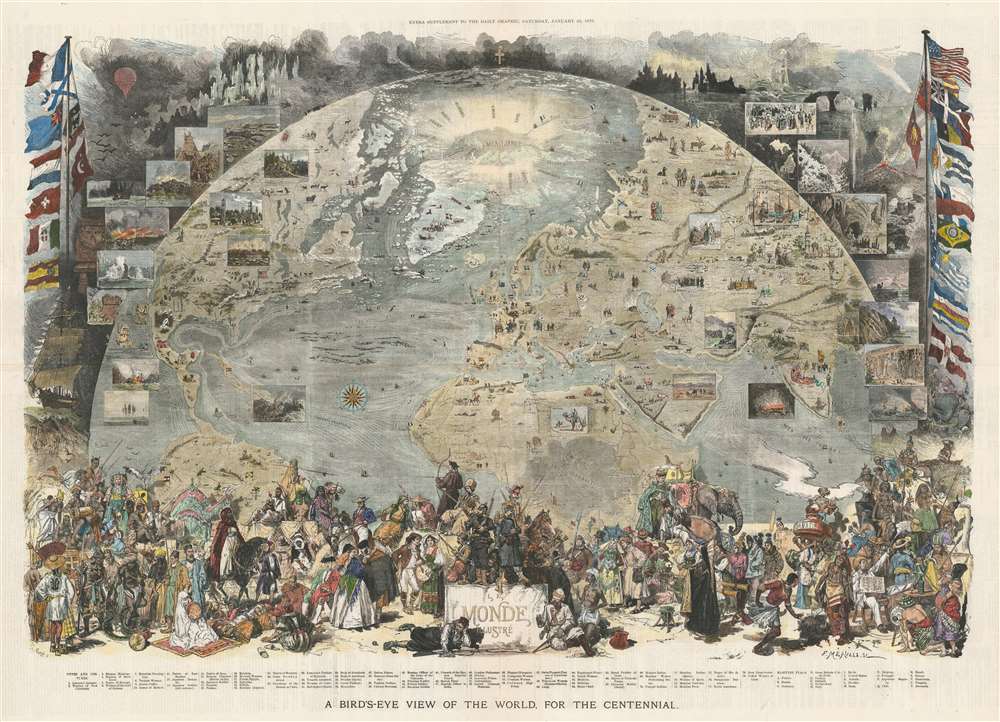 An extremely rare French pictorial map of the world published in the United States to celebrate the Centennial.

This is an 1876 Scott and Vierge pictorial map of the world. Projected as a view from space, the map depicts the world roughly from the Equator to the North Pole and from California to India. The idea is to, essentially, illustrate the late 19th century work in a single 'blink-of-the-eye' glance that encompasses geography, cultural diversity, scientific achievement, and various archeological 'wonders.' Pictorial vignettes dot the globe and highlight covered wagons and the Union Pacific Railroad in the U.S., Mayan and Aztec ruins in Mexico, the Pyramids of Giza in Egypt, and the Winged Bull of Nineveh in Iran. Transatlantic trade lines between New York and France are marked and the nations of the world are labeled and marked by their respective flags. The routes of Arctic explorers are noted as well, with a large notation of 'Mer Libre?' just above Greenland, which likely refers to the continued hope of finding a Northwest Passage. Views are included all around the world and highlight natural wonders (Niagara Falls, avalanches), fauna (bison), and people (American Indians, Touaregs). Seventy-nine illustrations of people from all over the world in their traditional dress are situated along the bottom border.

Daniel Vierge (March 5 1851 - May 10, 1904) was a Spanish illustrator, draftsman, and watercolorist active in Paris from 1870 to about 1890. Vierge was born Daniel Ortiz y Urrabieta Vierge, son of Spaish draftsman Urrabieta Vicente Ortiz in Madrid, Spain. He studied illustration at the Madrid school of fine arts before moving to Paris. In 1870 he was invited by Charles Yriarte to work of Le Monde Illustrated, a popular French periodicals. He also produced numerous book illustrations, among them, the illustrations for Victor Hugo's L'Annee terrible. Learn More...


Fortuné Louis Méaulle (April 11, 1844 - 1901) was a French engraver active in Paris during the second half of the 19th century. Méaulle worked primarily with woodcuts and engraved for numerous significant Paris illustrators, including Daniel Vierge, Edmond Marchand, Francois, Chiffart, and Henry Meyer, among others. His work appears in numerous issues of Le Monde Illustre as well as Victor Hugo's Les Travailleurs de la Mer. Learn More...

The Daily Graphic Saturday, January 22, 1876.     The Daily Graphic: An Illustrated Evening Newspaper (1873 - 1889), founded in New York City by George-Édouard Desbarats and William Leggo in 1873, was the first American newspaper with daily illustrations. The Daily Graphic printed illustrations of contemporary news events and notable personalities, cartoons, and reproductions of paintings. Unfortunately, the paper was never a financial success, and Desbarats and Leggo both returned to Montreal in the late 1870s. The Daily Graphic was the first newspaper in the United States to print a daily weather map, which first appeared in its May 9, 1879 edition. The map, which ran in The Daily Graphic through September 1882, was provided by the weather service of the U.S. government. The government also paid the paper $10 a day to print the map.