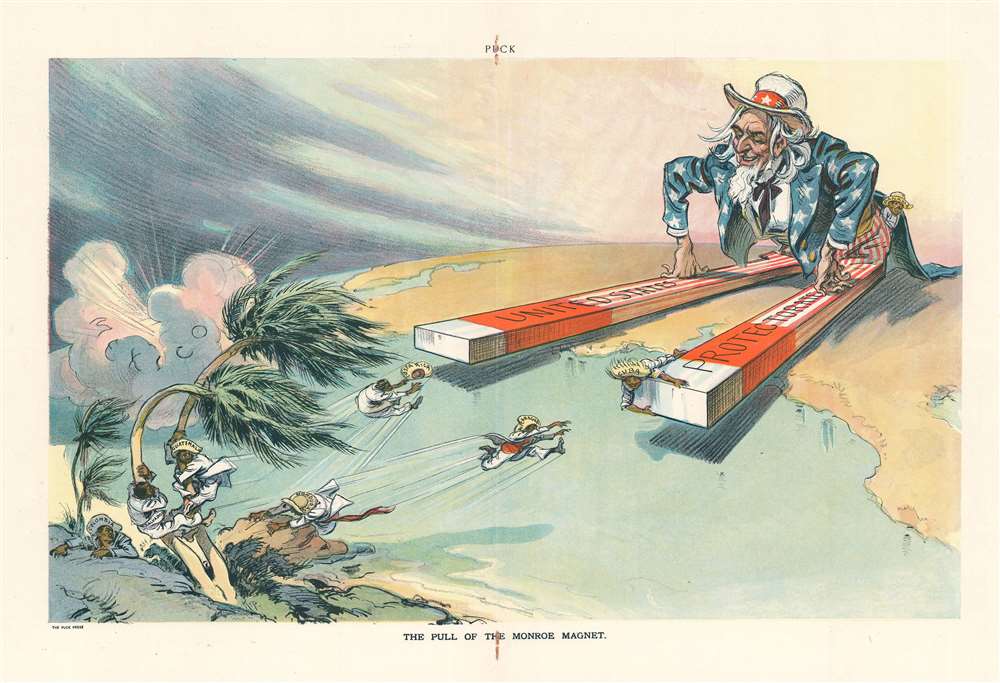 This is a 1913 Udo Keppler political cartoon lambasting American protectorates in Latin America. The cartoon portrays Uncle Sam in a leisurely position, dressed in a star-spangled waistcoat and rede and white striped pants. His legs extend south toward the Gulf of Mexico and are drawn like the poles of a magnet. This magnet attracts Caribbean, Central, and South American countries (which are all personified as small Hispanic men wearing straw hats and white clothes). Their hats bear the name of the country each man represents. Panama appears in Uncle Sam's pocket, while Cuba grabs the end of one of the magnet's poles. Nicaragua and Costa Rica zoom across the Gulf pulled from the other coast by magnetic forces. Honduras, Guatemala, El Salvador, and Colombia cling to the far shore, trying as hard as they can to resist the unwanted advances.

U.S. Protectorates in the Caribbean, Central, and South America Before World War I

The first U.S. protectorate in the Caribbean was Cuba, established by the Platt Amendment, which was passed in 1901 and was incorporated into a treaty with Cuba in 1903. The U.S. also established a protectorate over Panama in 1903, after supporting a group seeking independence from Colombia. U.S. support soon won the Americans possession of the Canal Zone from Panama, which the U.S. held sole possession of until 1977. The Theodore Roosevelt administration tried to establish a protectorate in the Dominican Republic but failed to garner Senate support. President Taft's administration then made Nicaragua a protectorate in 1907. All this American interventionism was based on the Monroe Doctrine, which warned European nations against establishing colonies or other puppet governments in the Western Hemisphere. Theodore Roosevelt established the 'Roosevelt Corollary' in 1904, which stated that the U.S. had the right to intervene in any Latin American conflict that exhibited 'flagrant and chronic wrongdoing by the Latin American country.'

This cartoon was drawn by Udo Keppler and published in the August 13, 1913 issue of Puck. One example is cataloged in OCLC, and it is part of the collection at the Library of Congress.

Udo J. Keppler (April 4, 1872 - July 4, 1956) was an American political cartoonist, Native American advocate, and publisher, known as Joseph Keppler Jr. beginning in 1894. The son of Joseph Keppler (1838 - 1894), the founder of Puck magazine, he was born in St. Louis, Missouri, and graduated from the Columbia Institute in 1888. Between 1890 and 1891, Keppler studied in Germany, and worked for Puck from 1890 until 1914. He contributed cartoons to the magazine beginning that year and became a co-owner of the magazine after his father's death in 1894. He changed his name to Joseph Keppler Jr. after he inherited his father's position at the magazine. He sold Puck in December 1913, and stayed on as art director for another four months. After the sale of Puck, Keppler contributed to Judge and Leslie's Weekly until 1915, and retired in 1920. He moved to La Jolla, California, in 1946 where he died ten years later. He married Louise (Lulu) Eva Bechtel, a match opposed by his mother and sister, on April 4, 1895. Learn More...

Keppler, U. 'The Pull of the Monroe Magnet,' Puck, Vol. LXXIV, No. 1902. (Puck: New York) August 13, 1913.     Puck (1871 - 1918) was the first successful humor magazine in the United States and featured colorful cartoons, caricatures, and political satire. Founded by Joseph Keppler in St. Louis, Puck began publishing both an English and a German language edition in March 1871. The German edition moved to New York City five years later and published its first issue there on September 27, 1876, and the English edition soon followed and began publishing from New York on March 14, 1877. 'Puckish' means 'childishly mischievous'm which led to Shakespeare's Puck (from A Midsummer Night's Dream) to be recreated as the mascot of the magazine and for his name to become its title. Each issue featured a full-color political cartoon on the front cover, a full-color non-political cartoon on the back cover, and a two-page centerfold that usually addressed a political topic as well. In 1893, Keppler moved the magazine to Chicago and published smaller editions of Puck from the Chicago World's Fair. Keppler died in 1893, and Henry Cutler Bunner, who had been editor since 1877, took over. Bunner operated the magazine until he passed away in 1896, which left Harry Leon Wilson in charge until his resignation in 1902. The German edition was published until 1897. Joseph Keppler, Jr. then became editor. William Randolph Hearst bought the magazine in 1916 and operated it for another two years until the final issue was distributed on September 5, 1918.