1825 Carez Comparative Map or Chart of the World's Great Mountains 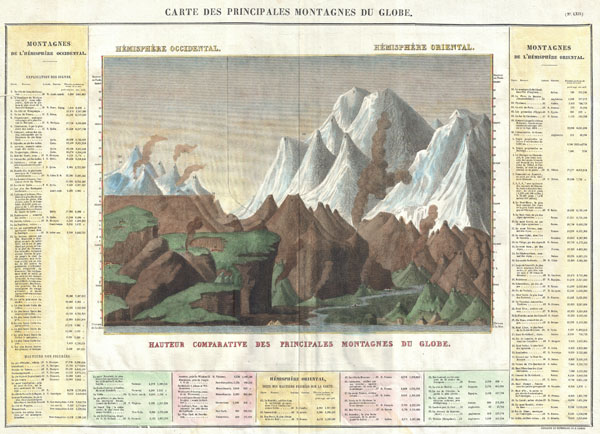 1825 Carez Comparative Map or Chart of the World's Great Mountains

This is a stunning 1825 comparative chart of the world's mountains. Divided into the Western Hemisphere mountains ( on the left ) and the mountains of the Eastern Hemisphere ( on the right ). Also includes the relative elevations of important cities, monuments, etc. Unlike most comparative charts issued in the mid 19th century, this chart includes a reference table as part of the map itself. Lists Dalhgari, in Nepal, as the world's tallest mountain, but also features smaller mountains that today serve as sky resorts such as Mt. Mansfield and Killington in Vermont, Mt. Monandnock and Mt. Washington in New Hampshire and Saddleback in Massachusetts. This was originally published in the 1825 French Edition of Carey & Lea's 1822 A Complete Historical...American Atlas, entitled Atlas Géographique. Statistique, Historique et Chronologique des Deux-Amériques et des îles adjacentes. It was edited and published by Jean Alexandre Buchon.

J. Carez (fl. c. 1815 - 1850) was a Paris based book, atlas and map publisher actived in the early 19th century. Little is known of Carez's life. He is best known for his publication of the French edition of H. C. Carey and I. Lea's important Complete Historical, Chronological, And Geographical American Atlas.