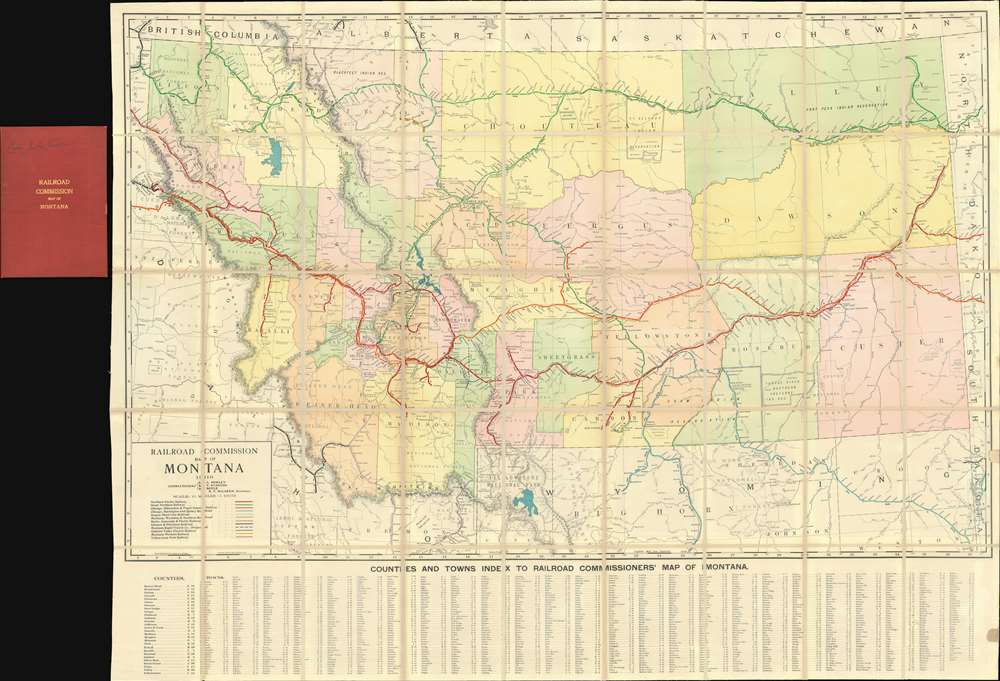 A rare 1910 large format railroad map of Montana issued for the Railroad Commission- possibly the best map of Montana to be issued in the first 10 years of the 20th century. The map covers all of Montana and parts of the adjacent lands in considerable detail, naming towns, Indian Reservations, rivers, National Forests, Battlegrounds, Indian Agencies, counties, and of course, railroads. Along the bottom of the map roughly 1000 tows are identified and referenced.

In the early years of the 20th century, Montana went through a boom of development and growth - largely coinciding with the arrival of the railroads and the development of large-scale mining around Butte and elsewhere. While these industries were catalysts for the economic development of the region, they were largely controlled by powerful business magnates and corporations based in large centers farther east. This gave rise to grass-roots rural-based progressive-populist movements in Montana, Wyoming, and Colorado. These movements argued for the local empowerment of the largely rural states and canvassed to limit the growing influence of national big-business concerns.

While in Montana, the progressives had little luck managing the entrenched mining concerns, they were able to influence the development of the railroads. Although the most passionate progressives argued for a full state takeover of all Montana railroads, the state legislature ultimately found a middle ground, establishing the Montana Railroad Commission in 1907. This map's first issue, in 1908, and subsequent 2nd issue in 1910 (present example), correspond to the Commission's need for detailed cartography to plan and implement its regulatory mission. The Commission successfully exercised its powers on a number of fronts, leading to a more people-focused railroad system than common in other parts of the country. In 1913, the authority of the Montana Railroad Commission was expanded dramatically, and it was renamed the Montana Public Service Commission.

Railroads On the Map

The railroads identified are:. This list includes the Montana Rapid Transit 's electrical railroad between Three Forks and Bozeman, which was at the time only a proposed route. It also includes includes the Oregon Short Line and the Northern Pacific Yellowstone River Line, both of which were extended to access Yellowstone National Park.

This map was published in Chicago by the Rand McNally Company for the Montana Railroad Commission. The earliest publication of this map we have been able to trace in 1908. Editions followed in 1910 (present example), 1915, and 1917. This map has provenance connecting it to Captain J. L. Tucker, an influential in the early development of the Montana National Guard. Today this map is scarce on the market.