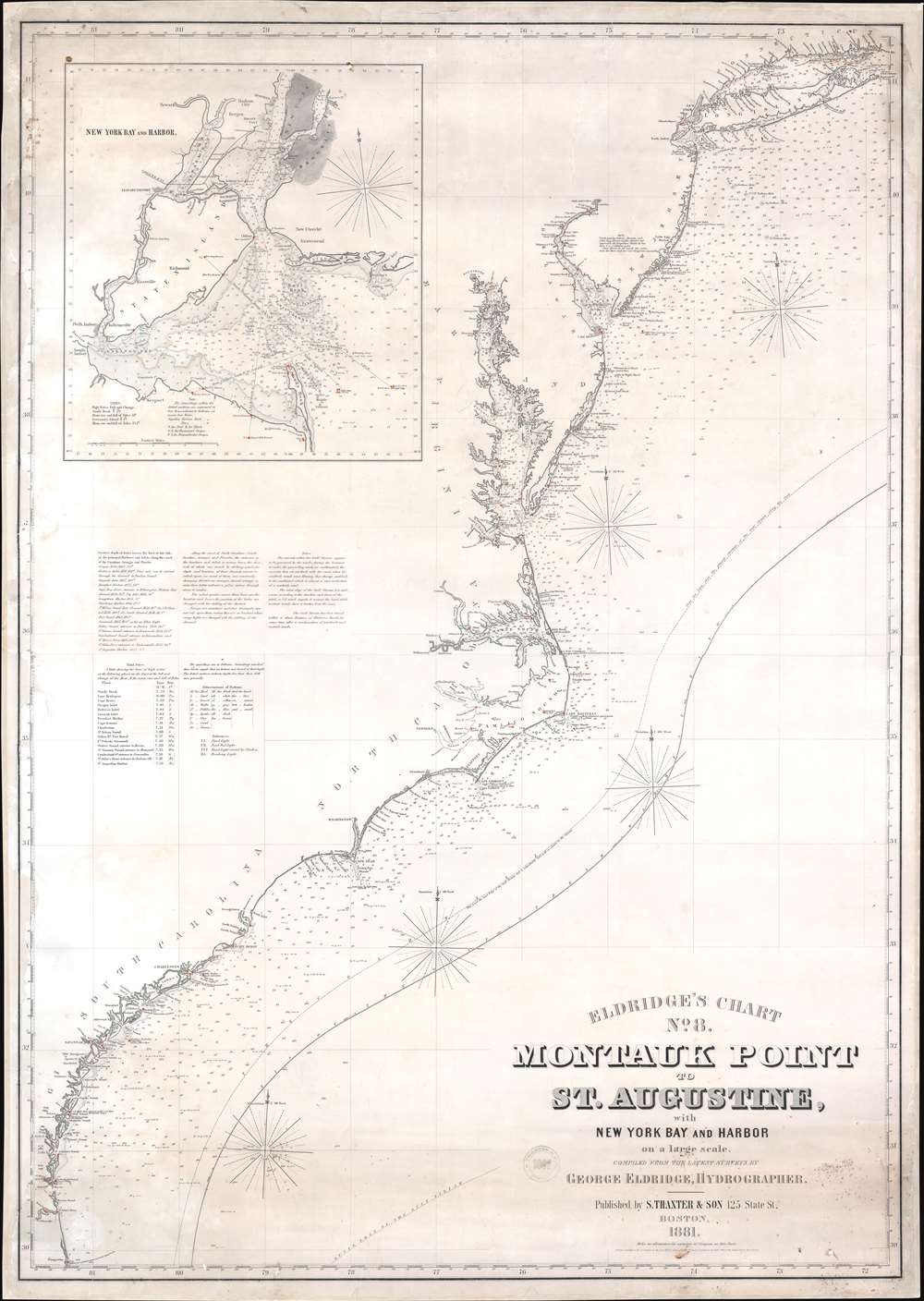 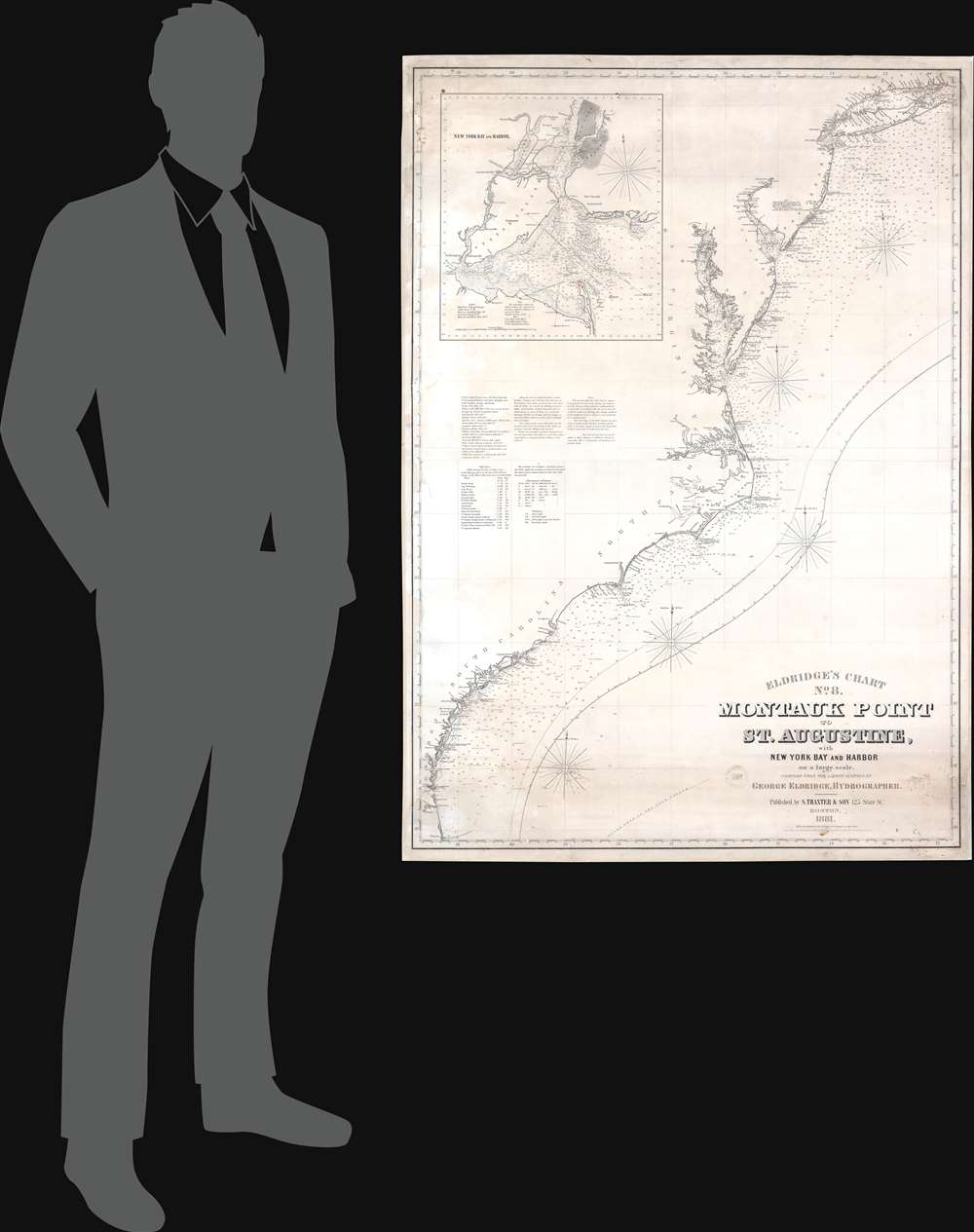 This is an 1881 George W. Eldridge blueback nautical chart or maritime map of the east coast of the United States covering from Long Island Sound to St. Augustine, Florida. The chart provides a nautical overview of the eastern seaboard, with countless depth soundings and coastal navigation lights marked in manuscript orange. The Chesapeake Bay especially offers stunning detail - reflecting nearly 50 years of constant meticulous hydrographic work. Coastal islands along New Jersey, Maryland, and the Carolinas, are illustrated in detail as well. The Gulf Stream curves its way to the northeast through the Atlantic. An inset in the upper left corner details New York Bay and Harbor. Depth soundings are indicated throughout the bay and harbor and up the Hudson and East Rivers. New York, Brooklyn, Fort Hamilton, New Utrecht, Gravesend, Jersey City, Hoboken, and Newark are all labeled.

This map was created by George W. Eldridge and published by S. Thaxter and Son in 1881. We have located editions of this map dating as early as 1874 and as late as 1884. This is the only discoverable example of the present 1881 edition.

George Eldridge (November, 1821 - August, 1900) and his son George Washington Eldridge (1845 - 1912) were American makers of Nautical Charts and Pilot Books active in the late 19th century. George Eldridge was Cape Cod fisherman known locally as an excellent ship's pilot. While recuperating from an injury in 1851, Eldridge drew his first nautical chart. The chart proved popular and its success led Eldridge to pursue a career in hydrography - the science of mapping the sea with a special focus on navigation. Eldridge produced numerous subsequent maps and is credited with issuing some of the earliest accurate nautical charts of the American Atlantic coast. In time George Eldridge passed his thriving business on to his son, George Washington Eldridge, who continued to produce beautiful, practical, maritime charts well into the early 19th century. Though most of Eldridge's charts were loosely based on U.S. Coast Survey work, they proved popular with navigators a talent, shared by both father and son, for distilling the often convoluted Coast Survey maps into practical nautical chart charts for the working mariner. From 1875, in addition to large format independently issued nautical charts, Eldridge also issued annual editions of Eldridge's Tide and Pilot Book and The Book of Harbor Charts. The Eldridge offices were located at 103 State St. Boston, Massachusetts. Learn More...


Samuel Thaxter and Son (fl. 1722 - 1916). Samuel Thaxter (1769 - 1842) is the founder of a Boston dynasty of manufactures of mathematical instruments and nautical charts. He founded the firm in 1792 and is first referenced in the 1796 Boston Directory. Around 1822 he incorporated his son, Joseph H. Thaxter (1801 - 1835), into the business renaming it 'Samuel Thaxter and Son'. The firm would retain this name for the remainder of its existence. This successful business was subsequently passed to Joseph H. Thaxter's son, Samuel Thaxter Cushing (1821 - 1882), in 1843. It was Thaxter Cushing who developed the firm's publishing arm, partnering with the Boston nautical chart maker George Eldridge. They are best known for 13 large format blueback charts focusing on the east cost of the United States published in the second half of the 19th century. They also published numerous smaller maps and pilot books. After Thaxter Cushing died the firm was taken over by his widow, Abby C. Cushing, who managed it until 1905. It was subsequently managed by Herbert Risteen Starratt and continued to be registered in the Boston Directory until about 1916. Learn More...

Good. Full professional restoration. Mounted on linen. Exhibits areas of toning, dampstaining, foxing, and light soiling. Exhibits some reinstated areas, including in the upper and lower right corners. This is a blueback, but the back is not actually blue paper, but linen.
Looking for a high-resolution scan of this?