1835 Burritt - Huntington Map of the Constellations by Month (4 Maps) 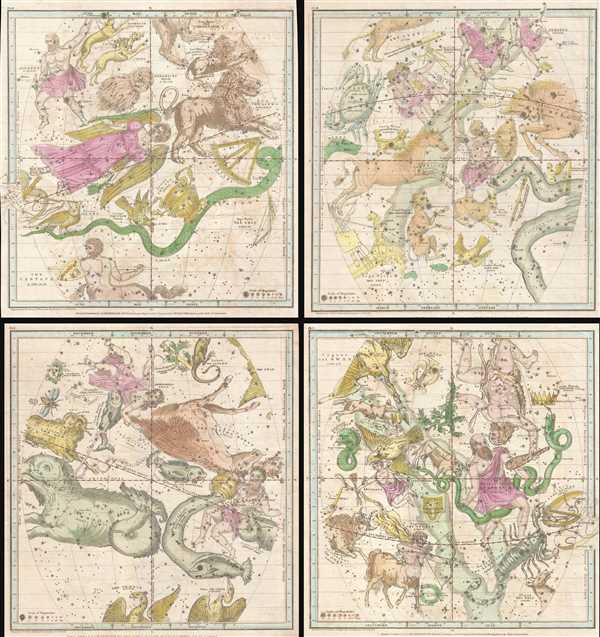 1835 Burritt - Huntington Map of the Constellations by Month (4 Maps)

Beautifully colored set of four celestial maps showing the constellations throughout the year.

All four maps are quartered by lines indicating the Solstitial and Equinoctial Colures. These maps, like all of Burritt's charts, are based on the celestial cartographic work of Pardies and Doppelmayr. The maps were engraved by W. G. Evans under the direction of E. H. Burritt and issued as plate nos. II, III, IV and V in the New Edition of F. J. Huntington's Atlas, Designed To Illustrate The Geography Of The Heavens. The present example is exceptional in that only a small percentage of the first edition of Burritt atlases featured individually colorized constellations. In subsequent editions, the constellation charts received a general, but non-specific wash. It is also significant to note that the condition of this set is superior to any other Burritt we have seen, which are typicaly rough due to being printed on low quality paper and heavy use under demanding conditions.

Burritt, E., Atlas, Designed To Illustrate The Geography Of The Heavens, New Edition, (Huntington and Savage) 1835.

Very good. Set of four maps. It is also significant to note that the condition of this set is superior to any other Burritt we have seen, which are typicaly rough due to being printed on low quality paper and heavy use under demanding conditions. Noted size represents a single sheet.