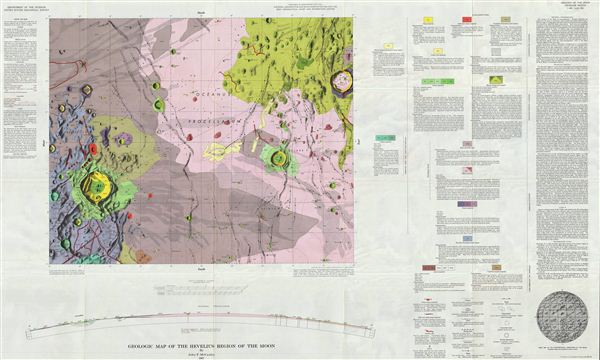 A stunning full color geologic map of the Hevelius Region of the Moon by the U.S. Geological Survey, one of the most pleasingly ‘lunar-looking' of the series, due to its varied topography and craters. Hevelius is a low-rimmed lunar crater on the edge of the Ocean of Storms. Only a low, eroded rim of Hevelius rises above the surface, the western wall having received several small impacts. The crater floor has been flooded by lava, and is crisscrossed by small clefts, the 'Rimae Hevelius.'

The crater was named after Johannes Hevelius, German mayor of Danzig in the 17th century and as an astronomer considered the founder of lunar topography, who also named 10 new constellations.

The map includes a sectional view, detailed ‘metadata' explaining the mapmaking methodologies and symbols employed, and an index map showing the area's location on the Moon. Like the Copernicus Quadrangle, this map contains exquisitely detailed textual description of the area's geology, and a description of a Russian probe that had soft-landed on the site just months before to gather photos and data.

Created in 1967 by John F. McCauley and published as plate I-491 in the United States Geological Survey's Geological Atlas of the Moon.