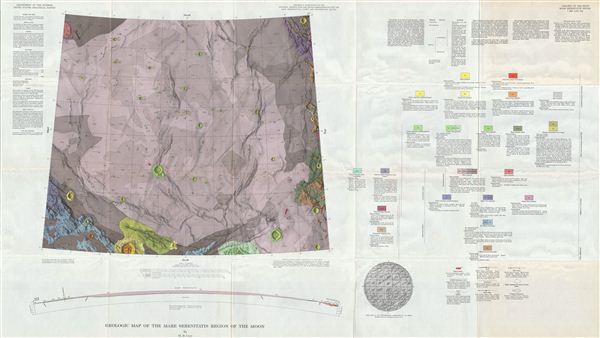 A stunning full color geologic map of the Moon's Mare Serenitatis, or ‘Sea of Serenity' - better known to us as the ‘right eye' of the Man in the Moon. The map's ghostly purple, punctuated by small, regular impact craters lends the map an eerily alien, worldly silence. Includes a sectional view of the mare from Montes Haemus to Posidonius (from the side), detailed text on the formation of the area's geology, extremely detailed ‘metadata' explanating the mapmaking methodologies and symbols employed, and an index map showing the area's location on the Moon.

The Mare Serenitatis is a lunar mare, or large, dark basaltic plain, formed by ancient volcanic eruptions. It is bordered by Mare Imbrium, Mare Tranquillitatis, and Mare Vaporum. These dark spots were dubbed maria, or ‘seas,' by early astronomers who mistook them for actual seas. These iron-rich plains are less reflective than the ‘highlands' and thus appear dark to the naked eye. Mare Serenitatis is not only one of the lunar maria but also a mascon, or area of massive gravitational attraction. Both Luna 21 and Apollo 17 landed near the Mare Serenitatis.

This map would be a great companion piece to the other maps in the Geologic Atlas of the Moon, especially those forming the face of the Man in the Moon. It would also wonderfully complement early explorers' maps, or any of the plates from Burritt's famous 1856 Atlas to Illustrate the Geography of the Heavens , one of writer H.P. Lovecraft's most prized possessions.

Created by M.H. Carr and published as plate I-489 in the United States Geological Survey's Geological Atlas of the Moon.