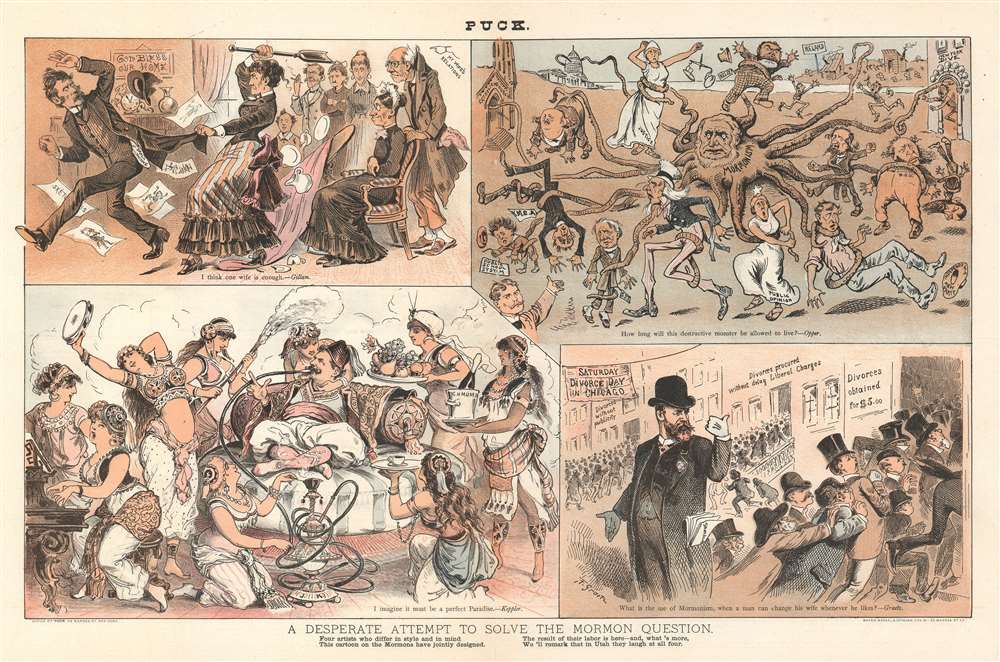 A political cartoons with four different illustrations of 19th century stereotypes of the Mormon religion.
$500.00

This is an 1884 Puck political cartoon grappling with the 'question of Mormonism'. Constructed in four panels done by four different Puck cartoonists, each panel presents each artist's perspective on the 'Mormon question', three of which address the question of polygamy/marriage in the Mormon faith.

Starting at the top left, drawn by Bernhard Gillam (1856 - 1896), the panel is entitled, 'I think one wife is enough', which, over course, is referencing the highly controversial and long-since banned, Mormon practice of polygamy. Here, Gillam is illustrated fleeing from his wife who has ahold of him by his coattails. She is wielding a fireplace scoop, which it looks like Gillam is trying desperately to avoid. Both panels along the bottom row also look at this part of the Mormon religion.

The left panel, drawn by Joseph Ferdinand Keppler (1838 - 1894), states, 'I imagine it must be a perfect Paradise'. In the cartoon, Keppler has drawn himself seated on a large cushion, dressed like a cartoonish Ottoman, and smoking a hookah, at the center of a harem. He is being served fresh fruits, champagne, and coffee by the women attending to him, while others fan him with a large plumed fan, sing, dance, and play music. This, obviously, is in stark contrast to Gillam's perceived perception.

Friedrich Graetz (c. 1840 - c. 1913) presents yet another perspective on the marriage question, although this one is more of a commentary on marriage in American society in general than Mormonism specifically. In his panel, Graetz has also drawn himself and asks the question, 'What is the use of Mormonism, when a man can change his wife whenever he likes?' Behind him, mobs of men are running, pushing, and shoving their way toward buildings marked 'Divorces obtained for $5.00', 'Divorces procured without delay Liberal Charges', and 'Divorces without publicity'. A banner hung above the street states, 'Saturday Divorce Day in Chicago'.

The top right panel, drawn by Frederick Opper (1857 - 1937) addresses a different question about Mormonism, as a threat to American, and by extension global, society. He entitled his panel, 'How long will this destructive monster be allowed to live?' Mormonism is depicted at the center of the panel as an octopus (with several more than eight tentacles, but who's counting?) and its tentacles are reaching out to all aspects of American society. One tentacle is wrapped around Uncle Sam, while another is reaching into a New York dive bar, presumably after the alcohol, since Mormons are not allowed to drink. Yet another is after the Catholic church, while another is wrapped around Justice's waste. The public-school system, the Y.M.C.A., public opinion, and even Congress are all at risk from Mormonism's reach. Yet another tentacle is stretched all the way to Ireland.

This cartoon was published in the February 13, 1884 issue of Puck. It is rare on the market and is part of a handful of institutional collections, including the Library of Congress and the University of Tasmania Library.