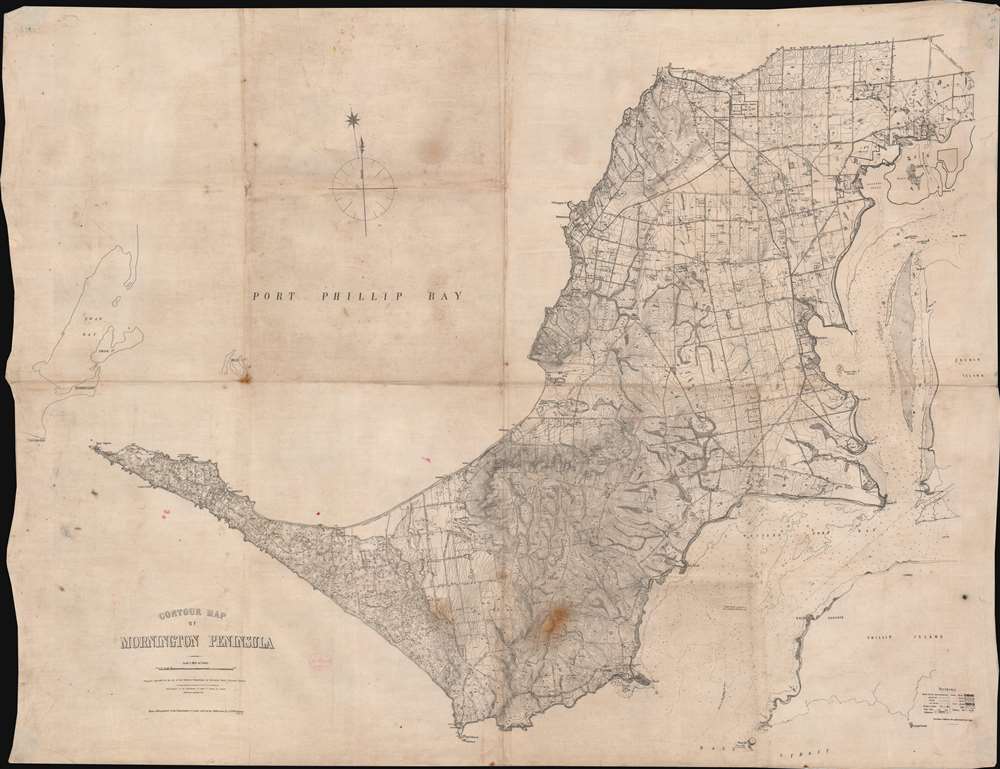 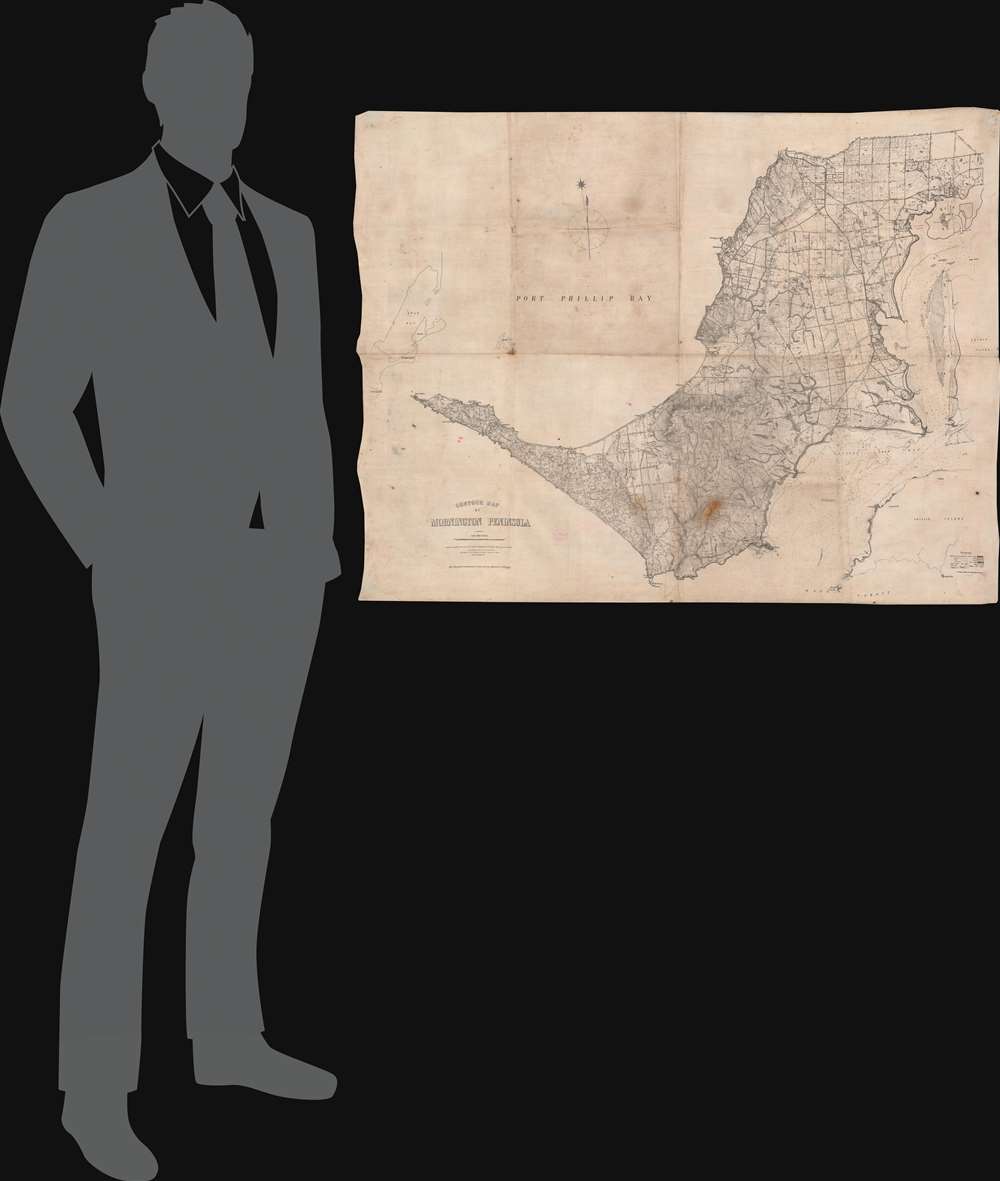 This is a rare 1891 Alexander Black map of the Mornington Peninsula near Melbourne, Australia, prepared for the use of the 'Defence Department of the Colony of Victoria'. It is primarily a topographical map but also offers comprehensive information about the peninsula and its defensive potential - increasingly significant in the face of a proactive German effort to establish a colonial presence in the Pacific. It was printed directly on waxed linen, a sign that it was meant for rough use in the field, as this material is resistant to dampness and durable through regular folding and unfolding.

This map is deeply tied to the defense of the Australian colonies and Australian confederation in the late 19th and early 20th century. Although late to the colonizing game, Germany was eager to make up for lost time - particularly in the Pacific due to its rich trade potential. From the 1850s, German colonies began appearing in the South Pacific, including the Bismarck Archipelago, the Marshall and Gilbert Islands, Kaiser Wilhelmsland (northeastern New Guinea), and German Samoa. In 1898, they sized Qingdao, forcing the Kiautschou (Jiaozhou) Bay Concession in Northern China, crowning their colonial empire in the North Pacific. A major colony in the South Pacific was an obvious next step in consolidating the growing German Pacific Empire. By the 1870s, heightened German activity in the region was already impacting Australian trade, and raising the legitimate concern that a move on the Australian mainland was imminent. Fear of German aggression thus pressured the Australian colonies to consolidate and coordinate defensively, ultimately leading to the 1901 Federation of Australia, with Melbourne as the temporary capitol. It is thus hardly surprising that first shots of World War I (1914 - 1918) were fired from Mornington's Fort Nepean at a German steamer.

This map was developed in the wake of the Victoria Gold Rush and the rising necessity of defending Port Phillip Bay. Major General James Bevan Edwards (1834 - 1922) led a systematic study of Australian colonial defenses - of which this map is likely a part - that led to a major defensive overhaul focused on utilizing the growing inland railroad network and centralized rapid-mobilization brigades to shore up static defenses as needed. Because of its geographic situation, the defense of the regional economic hub, Melbourne, relied heavily on controlling access to Port Phillip Bay via the Mornington Peninsula. The defense of Mornington was paramount to the security of nearby Melbourne (and all of Victoria) and this map represents the culmination of an aggressive period of fortification. Between 1878 and 1891, a chain of forts was constructed, including Fort Queenscliff, Eagles Nest, and Fort Nepean. By 1891, when this map was issued, Port Phillip Bay had become one of the most heavily defended harbors in the British Empire.

The Mornington Peninsula extends southeast of Melbourne and wraps in a southwesterly direction around Port Phillip Bay, thus creating a narrow and highly defensible entrance to the harbor. It hosted a small indigenous population of Boonwurring peoples in the 18th century, but by the time this map was issued, was heavily Anglophied - as the Anglo-Saxon toponomy throughout suggests. Today, the Mornington Peninsula, with its benign maritime climate, dramatic cliffs, and superb beaches, is a tourism hot spot. Mornington is also well known for its exceptional vineyards ideally suited to produce fine Pinot Noirs.

Alexander Black (fl. c. 1887 - 1900) was a cartographer and the Surveyor General of the Colony of Victoria in Australia. Learn More...