1720 Chatelain Map of the Russian Empire and Tartary 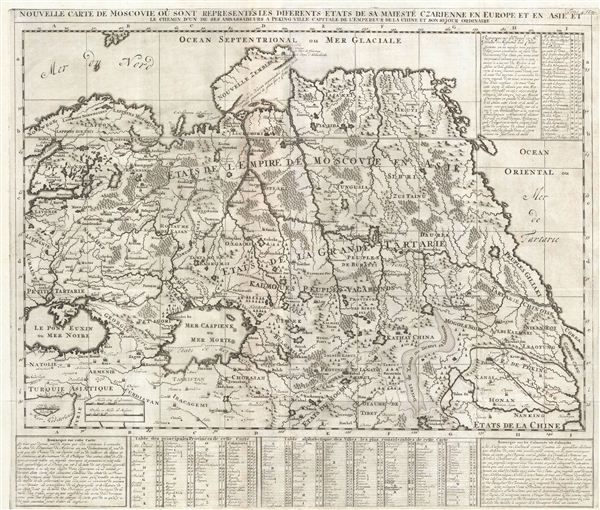 1720 Chatelain Map of the Russian Empire and Tartary

The hope and dreams of the Russian conquests in north Asia.

A beautifully engraved uncolored c. 1720 map of Russian in Asia, Siberia, Tartary and parts of China by Henri Abraham Chatelain. Chatelain's map of imperial Russia covers from the Black Sea (Pont euxin) to Korea (Corea) and the Pacific (Mer de Tartarie). The map exhibits the extraordinary lack of information in europe regarding this region at the beginning of the 18th century.

The Caspian Sea is ill-formed and erroneously oriented, a common error dating to the 17th century maps of Abraham Ortelius. Nonetheless, the exhibits considerably more sophistication in form than one finds on most earlier maps, suggesting that new information about Central Asia was slowing flowing into europe – most likely from Russian sources.

Chatelain draws the ‘Frontiere des etats de Moscovie' horizontally through the center of the Caspian, effectively splitting Muslim lands controlled by the Ottoman Turks, from the predominately Christian territories of the Russian Tsardom. The nomadic tribes of Independent Tartary and Grand Tartary are identified as ‘Peuples Vagabonds.' Across the continent from Peking (Beijing) to Turkey the grand cities and stopping points on the Silk Route, including Tangut, Kabul, and Kandahar are noted, as are the lands of the Iracagemi (Irak) and Curds (Kurdistan).

evident through the center of the Continent are various vast river systems that conform to the erroneous profit motivated belief that one could navigate form the ports of the Black Sea, and hence the Mediterranean, through the heart of the Russian steppe, to the high Arctic, thus giving the rich markets of the Mediterranean easy access to the treasures (mostly ivory and whale products) of the North Sea. The Island of Nova Zembla (Nouvelle Zemble) is rendered with an unexplored eastern shore, though the hut where the Dutch explorer Barentz spent a terrifying shipwrecked Arctic winter and ultimately perished is noted.

On the Whole the eastern extent of Asia is vastly underestimated and though Korea is correctly attached to the mainland, the vast lands of Kamtschatka and Siberia are entirely misrepresented. This is mostly likely a hopeful rendering suggestive of Russian hopes for a Northeastern Passage. Much like the Northwestern Passage, a Northeastern Passage over Asia was actively pursued countless doomed explorers hoping for fame and fortune through discovery of an easy naval connection between europe and the riches of China. As the fate of Barentz in Nova Zembla suggests, the sea route across northern Asia, though far more practical than the more famous route across North America, was ultimately impractical.

This map was engraved and published by Henri A. Chatelain as plate no. 29 in volume 4 of the Atlas Historique.

Very good. Original fold lines. Blank on verso. Platemark visible. Narrow but intact margins on right side and bottom.
Looking for a high-resolution scan of this?