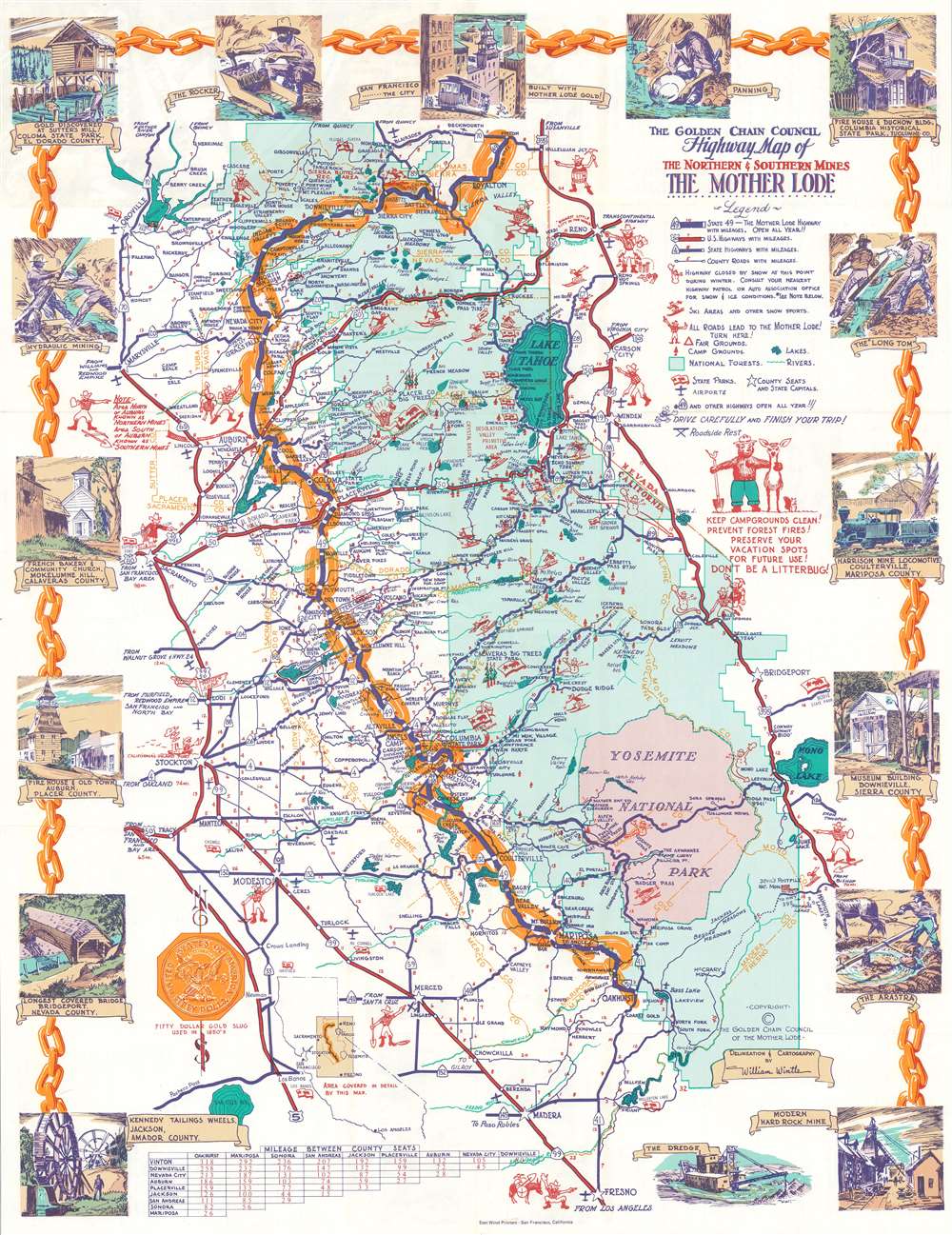 This is a c. 1955 William Wintle pictorial map of the Mother Lode gold region, California. The map depicts from Vinton south to Fresno and from Sacramento to Bridgeport, Nevada. Cartoonish prospectors point the way to the historic gold region. A golden chain highlights the 'Golden Chain Highway' (CSH 49) from Vinton to Oakhurst, which takes visitors through the heart of the district. Green emphasizes the forested areas of the Sierra Nevada Mountains while a pink area near the bottom of the map highlights Yosemite National Park. 'Bear Flags' mark California state parks, while snowmen mark highways that close in the winter. Illustrations of skiers promote ski areas. Wonderful color vignettes highlight important historical events, such as the discovery of gold at Sutter's Mill, historic buildings preserved in state parks, and prospectors mining for gold.

The discovery of Gold at John Sutter's mill by James Wilson Marshall (1810 - 1885) in January of 1848 was one of the most definitive moments in American history. Coming at the end of the Mexican-American War (1846 - 1848), the timing of the discovery could not have been more propitious. The combination of new seemly unlimited territory and the lure of gold led to a stampede of adventurers, prospectors, merchants, and homesteaders ready to take their chance with a new life on the frontier. The Gold Rush was not limited to Americans crossing the Great Plains. European, Australian, and even Chinese immigrants rushed into California hungry for their part of the great strike. This Great Migration of peoples transformed the United States in the span of just a few years from a former colony into an expansive transcontinental nation on the cusp of becoming a world power.

This map was drawn by William Wintle and published by East Wind Printers in San Francisco c. 1955. Another edition, likely dating from around the same time, was published by the Creative Lithograph Company of Oakland, California. The map is well represented institutionally.

William Watkin Wintle (December 30, 1911 - May 6, 1970) was a South African-American artist and gallery owner. Born in Johannesburg, South Africa, Wintle studied art while living South Africa. He immigrated to the United States in 1929, arrived in Blaine, Washington, on July 15, 1929, and settled in Oakland. He resumed his studies at the California College of the Arts in Oakland. Wintle became a U.S. citizen on April 6, 1942. During World War II, Wintle served as staff artist with Fleet Air Wing 1 of the U.S. Navy in the South and Central Pacific. He moved to Volcano, California, in 1952 and became co-owner of the Cobblestone Gallery. The gallery specialized in art focusing on the Mother Lode country. He was the official artist of the Golden Chain Council of the Mother Lode. He died in San Francisco. Learn More...