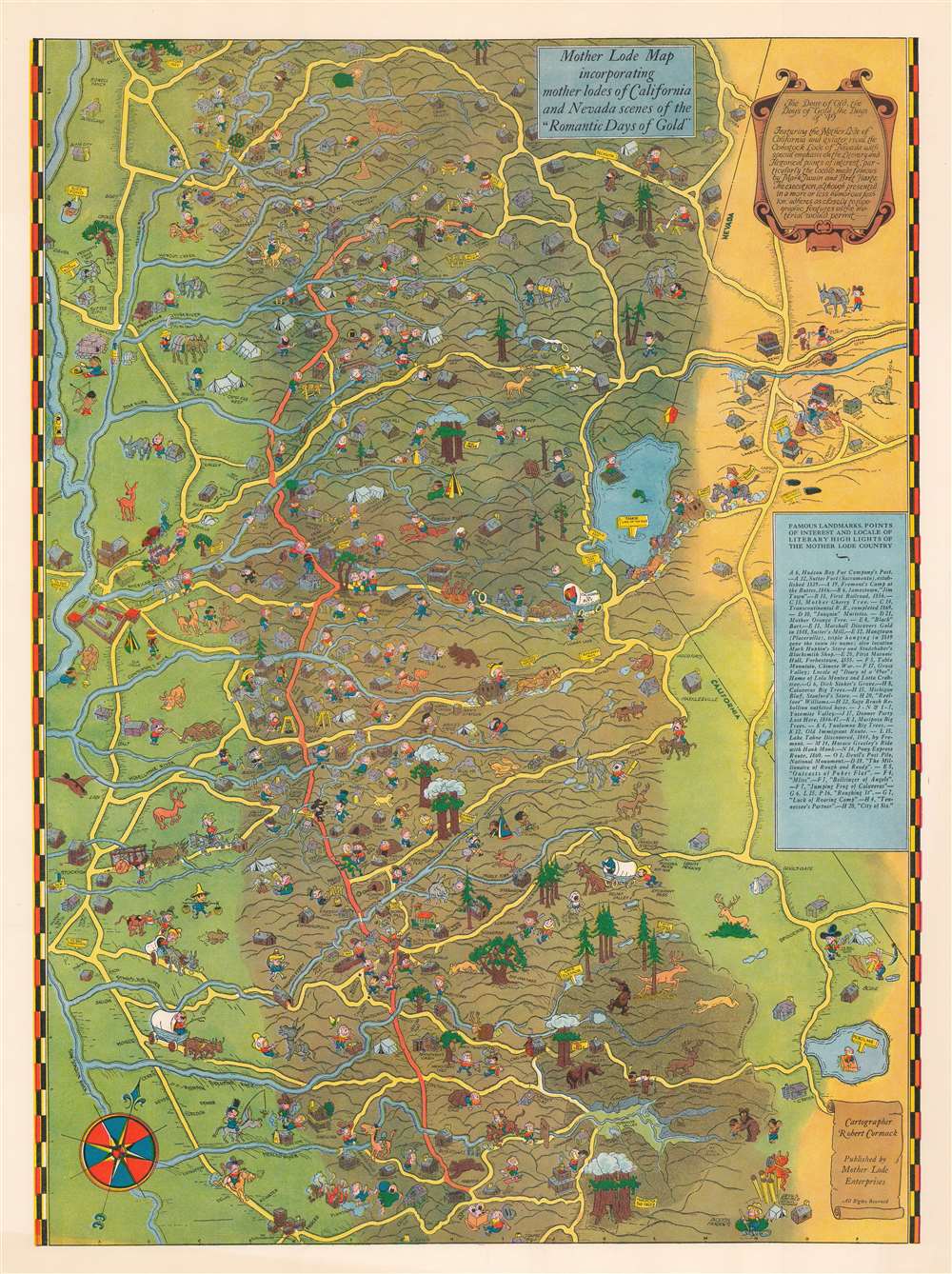 A comical pictorial map of the California Gold Rush and the Comstock Lode.
$450.00

This is a c. 1931 Robert C. Cormack pictorial map of the 'mother lodes' in California and Nevada from the 'Romantic Days of Gold'. It embraces not only the 'Mother Lode Belt' in the Sacramento Valley, but also the Comstock Lode around Virginia City, Nevada, and recreational wonders such as Lake Tahoe, Giant Sequoias, and Yosemite. The map is a product of the Golden Age of Pictorial Maps, a global phenomenon that began in the late 1910s in Europe, but by the 1920s-30s developed several regional styles, including, as here, the 'Jo Mora' California style.

Coverage extends from Chico to Merced and from Stockton and Sacramento to Virginia City. Regional landmarks are identified, including Sutter's Mill, where a 1848 gold discovery launched the California Gold Rush. Towns, villages, and mining camps are populated by comically illustrated miners and their families. Cormack does not restrict his caricatures to humans. Horses, bulls, and bears also exhibit comical expressions. Regional legends, such as the three men hanged at Hangtown (also known as Placerville) and Donner Pass are also labeled. Cormack also includes a covered wagon emblazoned with the phrase 'California or bust'.

Yosemite Valley is illustrated on the lower right and both Yosemite Falls and El Capitan are labeled. The region's 'big trees' are also identified, including the giant sequoias at the modern-day Calaveras Big Trees State Park, Toulomne Grove of Giant Sequoias, and the Mariposa Grove of Giant Sequoias. Lake Tahoe appears to the right of center along the California-Nevada border.

The discovery of Gold at John Sutter's mill by James Wilson Marshall in January of 1848 was one of the most definitive moments in American history. Coming at the end of the Mexican-American War, the timing of the discover could not have been more propitious. The combination of new seemly unlimited territory and the lure of gold lead to a literal stampede of adventurers, prospectors, merchants, and homesteaders ready to take their chance for a new prosperous life on the frontier. Moreover, the Gold Rush was not limited to Americans crossing the Great Plains. European, Australian, and even Chinese immigrants rushed into California hungry for their part of the great strike. This Great Migration of peoples transformed the United States in the span of just a few years from a former colony into an expansive transcontinental nation on the cusp of becoming a world power.

The 'Mother Lode' is a long alignment of hard-rock gold deposits stretching northwest-southeast in the Sierra Nevada Mountains of California. It was discovered early in the California Gold Rush when placer deposits in streams led prospectors to search for the source or 'mother'. The source was a zone some 1 to 4 miles wide and 120 miles long between Georgetown on the north and Mormon Bar on the South. Once placer deposits were exhausted, miners turned to the mother lode, digging deep mines all along the corridor. During the years following the California Gold Rush, the Mother Lode was one of the most productive gold-producing districts in the world. Individual gold deposits within the Mother Lode include gold-bearing quartz veins up to 50 feet thick and thousands of feet in length.

The Comstock Lode was a massive silver ore discovery under the eastern slope of Mount Davidson, in the Virginia Range in Nevada. Named after the miner, Henry Comstock, the Comstock Lode was the first major silver mine in the United States. Mount Davidson had deposits of both gold and silver and was mined for gold from about 1850. History credits Ethan and Hosea Grosh with the discovery of the mountain's extraordinary silver deposits - the Comstock Lode - in 1857. Although they discovered the Comstock Lode, neither Grosh brother profited from the claim. The uneducated miner Henry Comstock was charged with taking care of the Grosh cabin. Rooting around inside, he found a chest full of silver and gold ore. Comstock claimed the cabin and surrounding lands under his own name and proceeded to mine. The find became public knowledge in 1859, after which fortune seekers flooded the area, staking mineral claims and founding mining camps that would later become towns. Several bonanzas ensued, creating a cadre of instant millionaires. Most Comstock Lode mines began to decline after 1874, but prospectors still worked claims through the 1920s. Between 1860 and 1880, nearly seven million tons of ore were extracted and milled in the Comstock district. During 1877, its peak year, over $14 million in gold and $21 million in silver were extracted. The Comstock Lode mines also led several technological advances, including square site timbering and the Washoe silver smelting process.

This map was drawn by Robert Cormack and published by Mother Lode Enterprises c. 1931. Examples are part of the David Rumsey Map Collection and the collection at the University of California Los Angeles. An empty OCLC record exists for this map, suggesting that a former OCLC member institution created the entry.

Robert C. Cormack (April 1, 1909 - March 25, 1952) was an American artist and animator. Born in Alameda, California, worked as an artist at a California newspaper in the 1930s before getting a job with Walt Disney Studios, where he worked in 1940. Cormack is listed as one of the art directors on three Walt Disney films: Fantasia, Make Mine Music, and Bambi. Learn More...