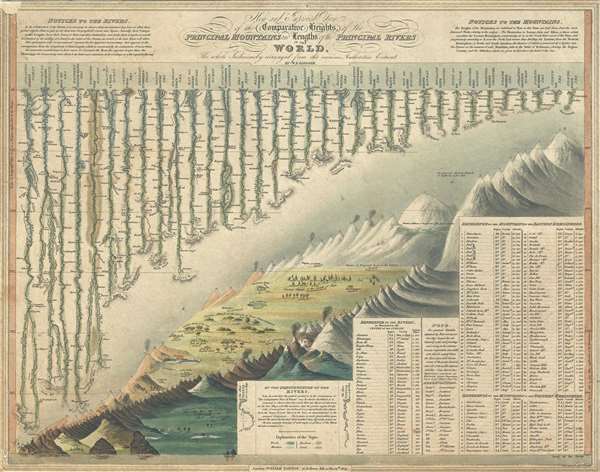 A groundbreaking convention establishing map of extreme scarcity, this is William Darton and W. R. Gardner's 1823 comparative mountains and rivers of the world chart. According to Rumsey this is the first known example of a comparative chart to depict both mountains and rivers in the same plate – thus defining a cartographic style that would flourish throughout the remainder of the 19th century.

The comparative mountains section, occupying the lower right half of this chart, details the principle mountains of the world. Ranges are color coded to show different types of vegetation and numerically reference tables in the lower right quadrant. The elevations of several important cities including Paris, Rome, London, Geneva, Mexico, Bogota, and Quito, among others, are noted. There are also extensive notations on vegetation, volcanic activity, and lichen, much of which is no doubt influenced by Humboldt. The Himalayan peak Dhaulagiri is identified as the world's greatest mountain. Even the ballooning feat of Gay-Lussac who attained an altitude of 7000 meters in 1808 is noted.

The upper left portion of this chart is dominated by the world's greatest rivers. Darton and Gardner attempt not only to express the lengths of the various rivers, but also details regarding their course and sources. All along each river important lakes, cities, directions, and distance measurements are noted. Here the Amazon is identified as the world's greatest river at some 3600 miles, followed by the Mississippi at 3530 miles. The Nile comes up a sad fifth at just 2686 miles, though admittedly its full length had yet to be explored.

This map is extremely scarce. It was issued and sold independently by Darton at his Map and Print Shop, 58 Holborn Hill, London. Examples of this map were issued in both case (as in the Rumsey example) and flat (as in this example) format; however, it was never included in an atlas or compiled publication. This is only the third known example to appear either on the market or in an institutional collection. That Wolter, whose study of comparative charts is the most significant scholarly approach to this material currently published, was not aware of this map is suggestive of its extreme rarity. A rare discovery that will not likely appear on the market again soon.


William R. Gardner (fl. c. 1810 - c. 1850) was and English engraver active in London during the first half of the 19th century. His offices were at 867 Strand Street, London. Gardner worked with many of the most prominent London publishers of his day including Charles Smith and William Darton. His most significant contribution to the world of cartography is his 1823 publication, along with publisher William Darton, of the first composite comparative mountains and rivers chart. Learn More...

Good. Map exhibits some soiling and a minor repair in the upper left corner. Backed on archival tissue.

Rumsey 4608.001. Wolter, John A., The Heights of Mountains and the Lenghts of Rivers. ( http://www.davidrumsey.com/blog/2009/9/5/heights-of-mountains-lengths-of-rivers ) ( http://www.geographicus.com/blog/rare-and-antique-maps/the-evolution-of-the-comparative-mountains-and-rivers-chart-in-the-19th-century/ )
Looking for a high-resolution scan of this?