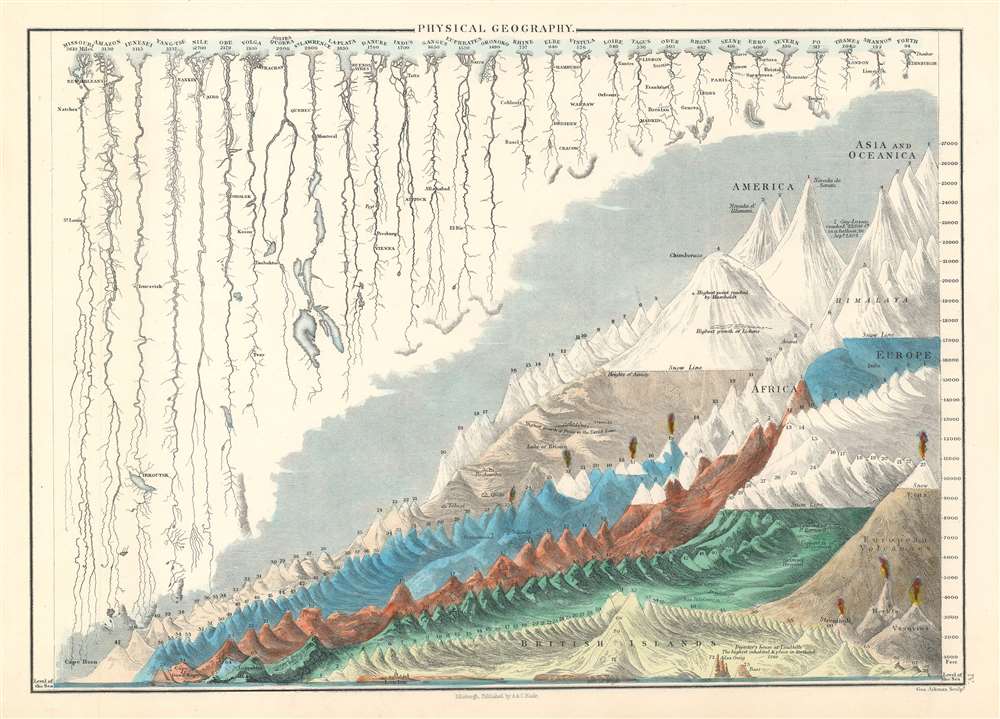 A fine example of Adam and Charles Black's 1840 comparative mountains and rivers of the world chart. Charts of this kind were first introduced in England around 1823 and became a common feature in atlases throughout the 19th century. The present example is admired as one of the more attractive British examples of the style.

The Mountains of the World

The comparative mountains section, occupying the lower right half of this chart, details the principle mountains of the world. Ranges are color coded to show different types of vegetation. The elevations of a number of important cities including Riobamba, London, Gibraltar, Toluca, and Quito, among others, are noted. There are also extensive notations on vegetation, volcanic activity, and lichen, much of which is no doubt influenced by Humboldt. The Himalayan peak Dhaulagiri is identified as the world's greatest mountain. Even the ballooning feat of Gay-Lussac who attained an altitude of 7000 meters in 1808 is included. It is interesting to note that while the style is international, Black has tooled this map to appeal to his British client base. Sites of exceptional interest to the British Islanders, including the 'highest inhabited place in Scotland' and the Convent of St. Gothard, are specifically identified.

The upper left portion of this chart is dominated by the world's greatest rivers. Black attempts not only to express the lengths of the various rivers, but also details regarding their courses and sources. Here the Mississippi is identified as the world's greatest river at some 3610 miles, followed by the Amazon at 3130 miles. The Nile comes up a sad fifth at just 2700 miles, though admittedly its full length had yet to be explored.

This map was engraved by G. Aikman and published by Adam and Charles Black in the 1853 edition of Black's General Atlas.

Hall, S. and W. Hughes, Black's General Atlas: Comprehending Seventy-Two Maps. Engraved on Steel, in the First Style of Art, By Sidney Hall, William Hughes, F.R.G.S., etc. New Edition., (Edinburgh: Adam and Charles Black) 1853.     Black's General Atlas was a popular Scottish atlas of the world issued by the Edinburgh firm of Adam and Charles Black. This atlas was first issued in 1840 with subsequent editions being printed well into the 1890s. While most editions were printed in Edinburgh, an American edition was issued in 1857. Most early editions of his atlas were engraved by S. Hall. Typically this refers to Sidney Hall, who died in 1831, but in this case, since the engraving was initiated well after his death, it was most likely his widow, Selina Hall, who did the engraving. Later editions feature additional maps updated and engraved by William Hughes. Early editions featured outline color only, but later editions embraced a full color approach with pale green, yellow, and blue pastels. All editions are known for their meticulous presentation of the most up-to-date cartographic information. Moreover, this exceptionally long publication run provides a fine cartographic record of the middle to late 19th century - particularly as regards the complex cartographic evolution of the Americas through this period.