1856 Colton Map or Chart of the World's Mountains and Rivers 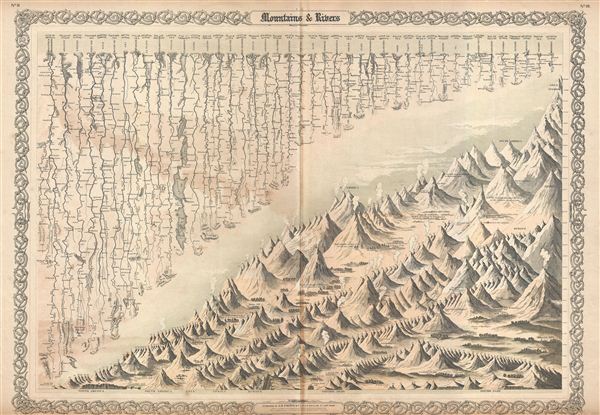 1856 Colton Map or Chart of the World's Mountains and Rivers

An excellent 1855 first edition example of Colton's Mountains and Rivers chart. Most likely the finest American Mountains and Rivers chart or map of the mid-19th century. This is the 1855 Colton prototype for the popular 1860-1863 Johnson's Mountains and Rivers chart. Depicts the relative distances of the world's great rivers and the relative heights of the world's great mountains. Includes a multitude of details regarding the heights of important cities, glaciers, volcanoes, and tree lines. Also includes Niagara Falls, the Great Pyramid, St. Peter's Basilica in Rome and St. Paul's in London. Notes curiosities that would have been relevant at the time, such as 'The Greatest Altitude of the Growth of Peruvian Bark,' 'The Glacier of Maladetts,' the 'Table Land of Pamar,' and the 'Greatest Altitude attained by Humboldt 19400 ft.' Replete with additional geographical errors and misconceptions common to the period. It is extremely rare to find this map in such good condition because it was issued at the front of the Colton Atlas, where most of the heavy damage from moisture, soiling, and general use was sustained. Surrounded by Colton's typical spiral motif border. Dated and copyrighted to J. H. Colton, 1855. Published from Colton's 172 William Street Office in New York City. Issued as plate nos. III and IIII in volume 2 of Colton's 1856 Atlas of the World.