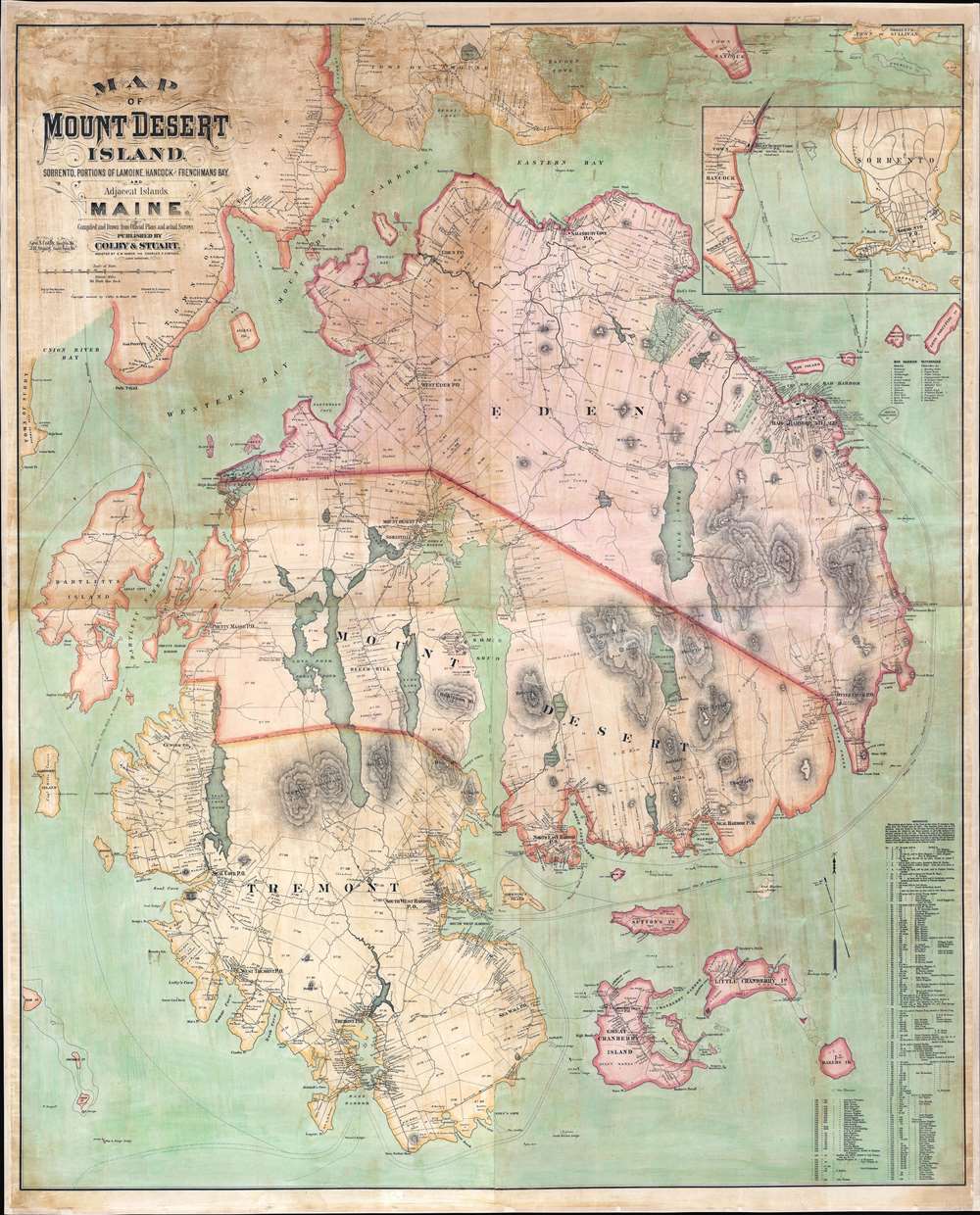 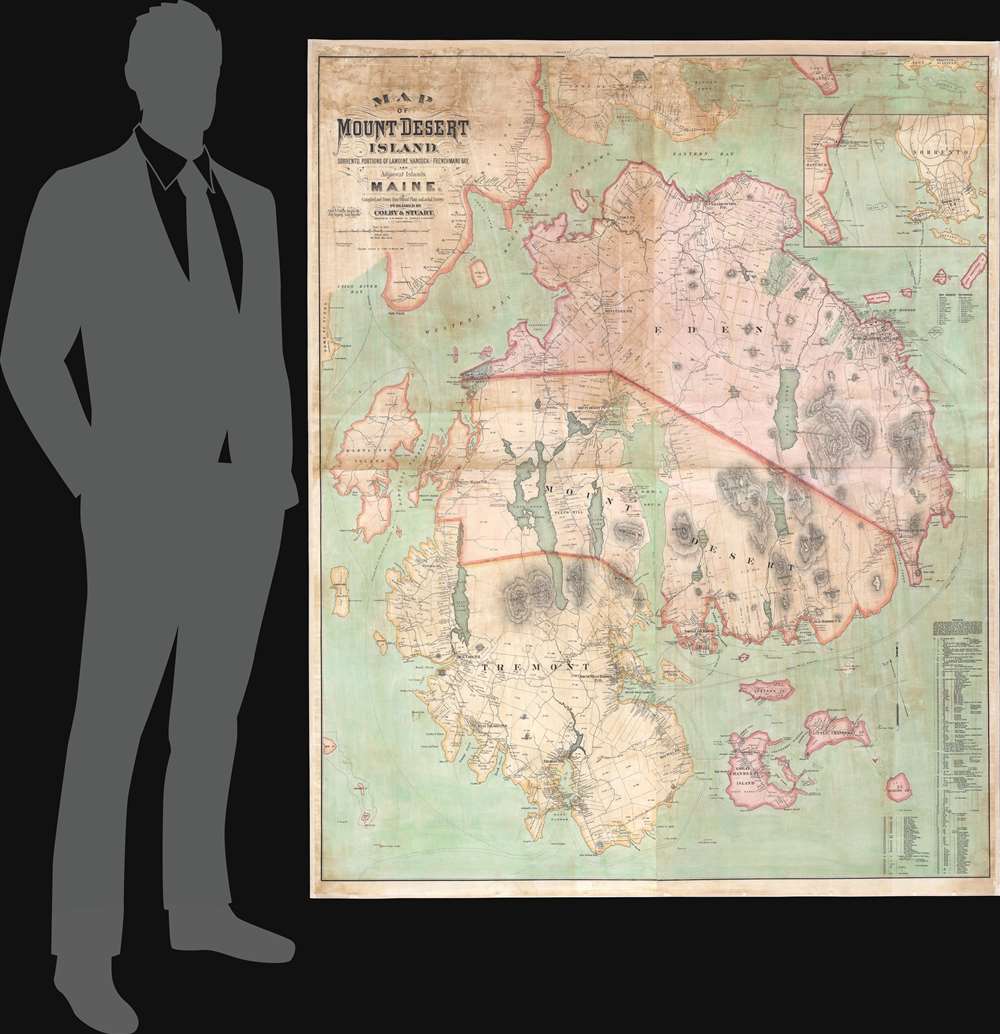 Best and largest map of Mount Desert Island at the height of its Gilded Age.
$8,500.00

The largest, rarest, and most important map of Mount Desert Island, Maine, to appear in the 19th century. Published by Colby and Stuart in 1887, this wall map captures Mount Desert Island and Bar Harbor at the height of its gilded age, when it rivaled Newport as a haven for the moneyed elite. The map embraces the island in exceptional detail, showing topography and roads, as well as property lots, the named estates of the wealthy, grand hotels, lodges, restaurants, and more. Today, most of Mount Desert Island is part of Acadia National Park, one of America's most beloved and beautiful national parks.

Mount Desert Island, so named because of its many bald rocky mountaintops, has been a tourist destination since the mid-19th century, when it was discovered by outsiders, artists, journalists, Hudson River School artists, and other patrons, known collectively as the 'Rusticators.' Undaunted by crude accommodations and simple food, they sought out local fishermen and farmers for accommodation and guidance. Summer after summer, the rusticators returned to renew friendships with local islanders and, most of all, to savor the fresh salt air, scenery, and relaxed pace. Soon the villagers' cottages and fishermen's huts filled to overflowing, and by 1887, when this map was issued, more than 30 hotels competed for vacationers' dollars. Tourism was becoming the island’s primary industry. Drawing the attention of the wealthy and influential, the island was designated as Sieur de Monts National Monument by President Woodrow Wilson in July 1916. In February 1919, the area's status was officially changed from a National Monument to a National Park, making it the first National Park east of the Mississippi River. With the change to a National Park came a name change, to Lafayette National Park. It was not until January 1929 that the park was given its current name, Acadia National Park. Acadia is unlike most other National Parks as its creation was encouraged by numerous private individuals. One, John. D. Rockefeller, purchased a summer home in Bass Harbor in 1910. Rockefeller began buying up land on the island with the goal of creating a system of carriage roads to make 'one of the greatest views in the world' accessible to all visitors.

Due to its enormous size, Stuart and Colby were able to lavish attention on the island's towns, in particular Bar Harbor, the largest settlement on Mount Desert Island and for most, the gateway to Acadia National Park. Here, individual 'summering estates', such as 'Devil's Rock', where when this map was made the Vanderbilts were relaxing, are named. Also, the map names some 14 hotels.

Bar Harbor was founded in 1796, when Englishmen Israel Higgins and John Thomas settle here. It was initially named Eden, after the statesman Sir Richard Eden, but from the early 1800s was colloquially known as 'Bar Harbor' - after the sand and gravel bar, visible at low tide, which leads across to Bar Island and forms the rear of the harbor. (The name 'Bar Harbor' was not officially adopted until 1918.) By the late 19th and early 20th century, Bar Harbor hosted 5 grand hotels and was a rival to Newport, Rhode Island, as an elite summering destination. Titans of commerce vied with one another to build the most extravagant mansions. In 1887, when this map was issued, Mount Desert was in the midst of a gilded age, which lasted until 1947.

Most of the buildings shown here, as well as 10,000 acres of Acadia National Park, nearly half the eastern side of Mount Desert Island, were burned in 1947 when a long drought precipitated an enormous forest fire. Most of Bar Harbor's Gilded Age architecture was lost, including its grand hotels and churches. The most notable survivor is Saint Saviour's Episcopal Church and Rectory, at 41 Mt. Desert Street, Bar Harbor - evident here and famous today for its glorious Tiffany stained glass windows.

This map was published in 1887 by Joseph Harry Stuart and George Nehemiah Colby, operating as 'Colby and Stuart'. It was engraved and printed in Philadelphia by 48er William Bracher and Swiss-American lithographer Frederick Bourquin. Today, this map is extremely rare. We note an example at the Library of Congress. We are further aware of at two other examples, both in private hands.

George Nehemiah Colby (January 13, 1846 - 1890) was an American civil engineer and map publisher active in Houlton, Maine in the late 19th century. Colby was born in South Berwick Maine and was married to Julie Gertrude Ganong (1853 – 1889). Colby's corpus of work consists primarily of Maine focused wall maps, county and state atlases, and more specific regional maps, for which he personally compiled surveys and sold by subscription. Colby initially worked with the U.S. Coast Survey, where his work contributed to the survey's important 1881 map of Mount Desert Island, Maine. In the private market Colby published Maine centered material in the style of Massachusetts cartographer Henry Walling. That is to say, he issued highly detailed maps on a large scale that he sold by subscription to local institutions and land owners. Colby's maps, like Walling's, are exceptionally desirable for anyone interested in family history, as they often list individual family names and land holdings. Colby pwartnered Frederick B. Roe in 1873 to issue wall maps of several Maine towns including New Brunswick, Thomaston, Bath, and Camden. This partnership lasted until about 1878 and maintained offices in Philadelphia at 31 South 6th Street. Colby later partnered with Joseph Harry Stuart (1855 - 183?) to similarly publish subscription-based maps and atlases of Maine counties and communities. When Colby retired in the 1890s, Stuart fully took over his business, continuing to publish as J. N Stuart into the 1930s. Colby and his wife had three children, George Nehemiah, Frederik Franklin, and Mary Gertrude. Learn More...


Joseph Harry Stuart (September 20, 1855 - 193?) was an American surveyor, civil engineer, and map publisher based in South Paris, Maine. Stuart was born in Bethel, Maine and married Mary Crafts Whitman (April 13, 1857 - 1934) of South Pairs, Maine, in 1878. He primarily worked and published as 'J. H. Stuart and Co.' Later, he partnered with George Nehemiah Colby (1846 - 1890), creating the firm of 'Colby and Stuart', publisher of Maine county atlases and wall maps. Likely he also maintained an office in Philadelphia, Pennsylvania where many of his maps and atlases were engraved. He appears in the South Paris city directory from about 1900 to about 1932 as a civil engineer, surveyor, and map publisher based at 61 High Street. He likely died between 1932 and 1936, but we have identified no records. Learn More...


William Bracher (June 29, 1829 - May 14, 1912) was a Philadelphia based engraver and lithographer active in the late 19th century. Bracher was born in Göppingen, Badan-Württemberg, Germany. He was a 48er, who emigrated to the United States in 1848 with his wife Amelia A. M. Bracher (born Naigele), fleeing the failed Springtime of the Peoples Revolutions (1848 - 1849). He settled in Philadelphia, where he established himself as line and stipple engraver as early as 1861. He was naturalized as a U.S. citizen on March 27, 1854. Around 1858, Bracher partnered with George Worley and Benjamin Matthais to from the printing firm of 'Worley, Bracher and Matthias'. They were active at 600-602 Chestnut Street, Philadelphia, until 1860, when Matthias left the firm. At this time, the firm was renamed 'Worley and Bracher'. In 1866, they relocated to 104 Hudson Street (rear 320 Chestnut Street) and remained until 1873. From 1873 to 1875, the firm rented at 31 South Sixth Street and then at 27 South Sixth Street until 1891. The firm appears to have shared space and often worked with a variety of private Philadelphia engravers, including Frederick Bourquin (1808 - 1897), William Hart, James McGuigan, F. C. Paxson, Henry J. Toudy (fl. c. 1857 - c. 1877), and Thomas S. Wagner. Learn More...


Frederick Bourquin (1808 - 1897), also spelled Bourgin, was a Swiss American engraver and lithographer active in Philadelphia in the mid- to late-19th century. Bourquin was born in Bern, Switzerland, and emigrated to the United States in 1817 accompanied by his brother, Charles F. Bourquin, also an engraver. They lived briefly in Bucks County, Pennsylvania, and New York City, before relocating to Philadelphia in 1829 to join the lithographic firm of Kennedy and Lucas. Bourquin was naturalized as a U.S. citizen in 1834. From 1842 the brothers worked for Peter Stephen Duval (1804/5 - 1886) at 'P. S. Duval and Co.' They became partners in the firm in 1857. In 1858, Frederick left Duval to partner with Robert Pearsall Smith (1827 - 1898), one of the lead publishers in the Philadelphia-based county map and state atlas industry, publishing as 'F. Bourquin and Company' (602 Chestnut Street). Smith completely and inexplicably retired from publishing around 1865, leaving the business to Bourquin. Subsequently Bourquin shared premises and often published with William Bracher's (1829 - 1912) firm, 'Worley and Bracher'. In the mid-1850s Bourquin relocated to Camden, New Jersey, where he served on the City Council from the 1870s - 1880s and in the New Jersey State legislature in 1872. His sons, Frederick Bourquin, Jr., Gordon M. Bourquin, David L. Bourquin, and Charles L. Bourquin, were all, to a greater or lesser extent, involved in the lithographic and/or printing business. Learn More...

Very good. Full professional restoration. Some stabilized varnish residue at top of map. Accompanies original rollers, but detached. Can be reattached on request.