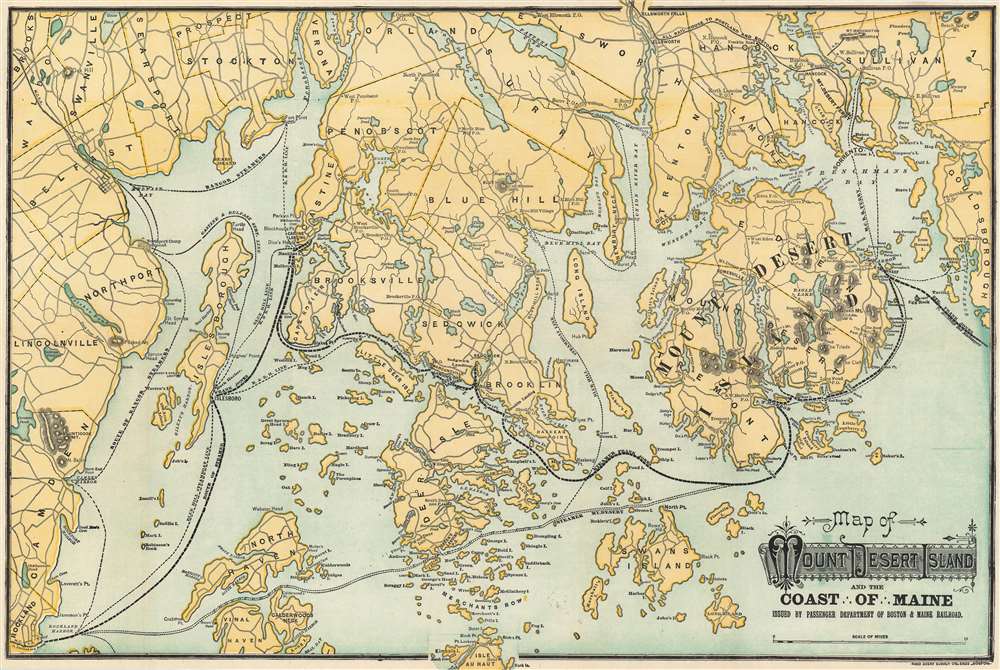 Map of Mount Desert Island and the Coast of Maine, home of the Acadia National Park.

This is an attractive 1902 Rand Avery map of Mount Desert Island and the coast of Maine issued by the Passenger Department of Boston and Maine Railroad. The map depicts Mount Desert Island and vicinity from Lincolnville and Rockland east to Winter Harbor and north as far as Pattens Pond and Verona. Roads and towns are illustrated throughout, and steamship and ferry routes running between several islands are identified, including those of Blue Hill Steamship Co., the Maine Central Railroad ferry, and the Bangor steamers. The railway route to Portland and Boston is also noted.

Though over a decade before the establishment of Acadia National Park, today Mount Desert Island is celebrated as the home of part of this magnificent national treasure. Acadia was initially established as Sieur de Monts National Monument by President Woodrow Wilson in July 1916. In February 1919, the area's status was officially changed from a National Monument to a National Park, making it the first National Park east of the Mississippi River. With the change to a National Park came a name change as well, with the region now being known as Lafayette National Park. It would not be until January 1929 that the park would be renamed Acadia National Park. Acadia is unlike most other National Parks as its creation was encouraged by numerous private individuals. One of these was John. D. Rockefeller, Jr. Rockefeller purchased a summer home in Bass Harbor in 1910, and began buying land in the park with the goal of creating a system of carriage roads as means of making more accessible to visitors what Rockefeller thought was 'one of the greatest views in the world.'

This map was issued by the Passenger Department of Boston and Maine Railroad and published by Rand Avery Supply Company, Boston in 1902.