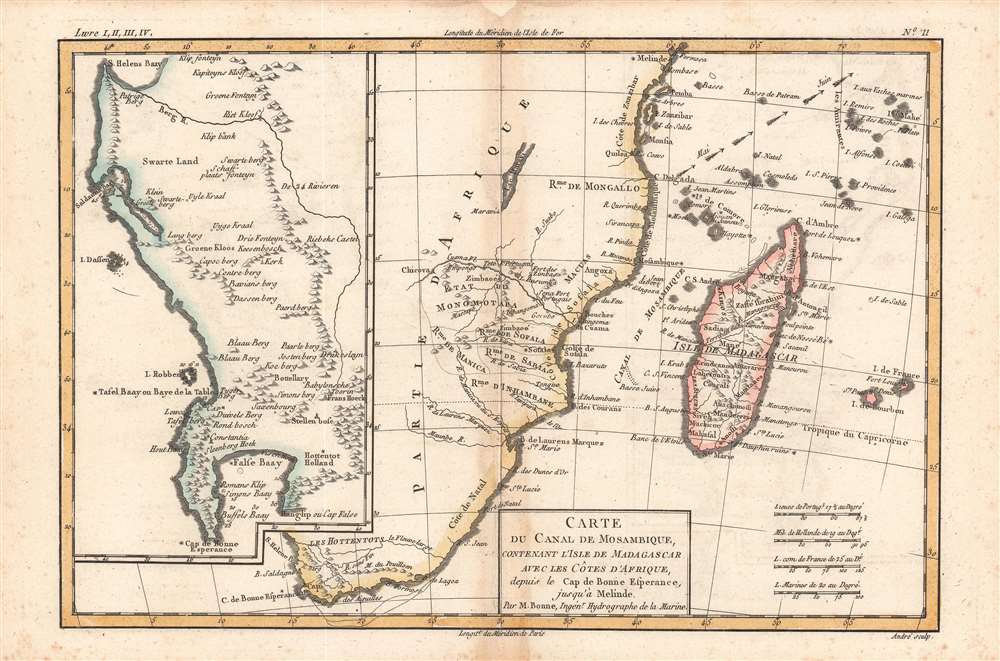 A superb example of Rigobert Bonne and Guillame Raynal's 1780 map of Southern Africa. It is essentially two maps in one, covering the entire southern portion of the continent.

The main map, on the right, covers from the Cape of Good Hope north as far as Zanzibar and modern-day Kenya, focusing on the formerly gold rich kingdom of Monomotapa. This region, today part of Mozambique and Zimbabwe, was often associated with the Biblical kingdom of Ophir, which is mentioned in the legend of King Solomon's Mines. This was one of the first parts of eastern Africa to be explored and colonized by Portuguese traders looking for a source of gold to rival that of the Spaniards in Mexico and Peru. However, the 'Mines of Solomon' had been mostly exhausted shortly before the Europeans arrived. Just north of Monomotapa, a very embryonic mapping of Lake Malawi appears with no defined northern terminus.

Offshore, Madagascar and the many Indian Ocean islands surrounding it are well mapped with considerable, though inaccurate, inland detail. Arrows show the direction of tradewinds and dotted lines identify some offshore reefs and other dangers.

The secondary map, occupying the left-hand quadrants of the chart, details Dutch claims in the western part of South Africa from the Cape of Good Hope north as far as St. Helens Bay. Various indigenous groups, forts, mountain ranges, and rivers are noted, as is Robben Island, later famous for the notorious prison used by the apartheid regime to house political opponents, including Nelson Mandela.

Good. Reinstated wormholing at top center, confined to margins.. Some discoloration along fold line and foxing in the margins, especially at bottom.