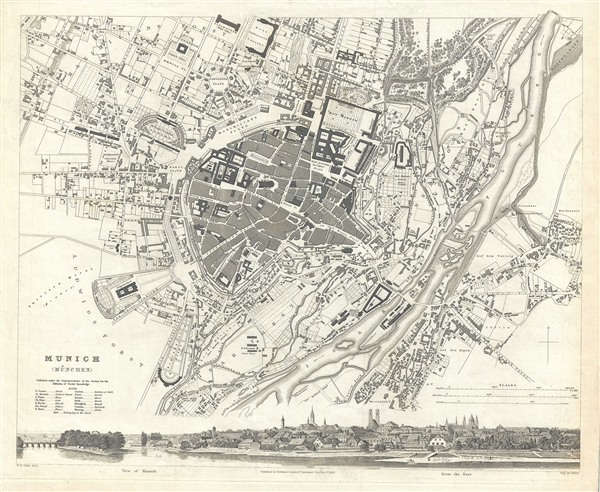 Attractive plan of Munich when it was the capital of the Kingdom of Bavaria.

This is a beautiful first edition map of the German city of Munich issued in 1832 by the Society for the Diffusion of Useful Knowledge, or S.D.U.K. It depicts the city a time when it was the capital of the Kingdom of Bavaria and covers the large walled and fortified city along with its surroundings. Notes streets, canals, churches, palaces, forests, parks, rivers, etc. A beautiful panoramic view of the city appears along the bottom margin.

This map is part of A Series of Maps, Modern and Ancient, issued by subscription. Each folder in the series would contain a set of two maps bound together. The map accompanying this folder, not included here, was of Bourdeaux. Original folder includes the names of committee members of the ‘Society’, list of maps previously published, the folder number, which is this case is XXXV, the contents and the printer and publication details. This map was drawn by W. B. Clarke and issued by the Society for the Diffusion of Useful Knowledge’s subscriber’s edition folder. The folder at the time was priced at 1 shilling plain or 1 shilling 6 pence colored. Published by Baldwin and Cradock.