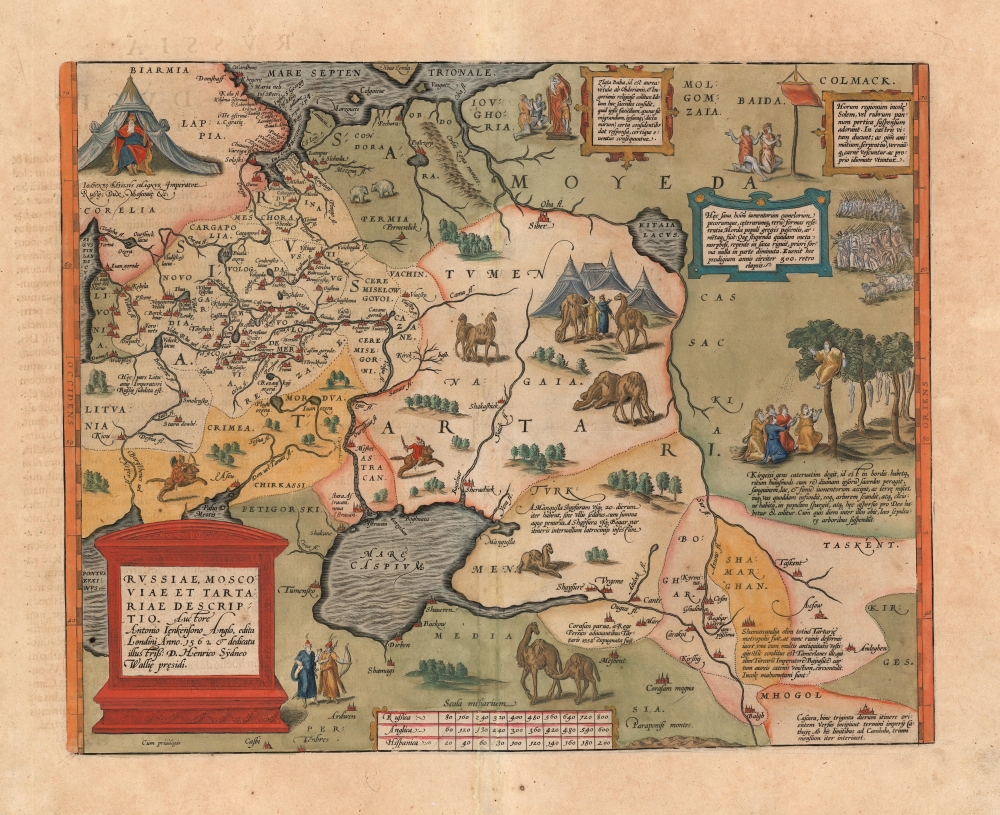 This is a 1601 example of Abraham Ortelius' 'Russia, Moscoviae et Tartariae', the first atlas map of Russia, and the first to be produced based on actual exploration. Its content is based on the travels of English merchant and diplomat Anthony Jenkinson, who visited Russia four times between 1557 and 1571. The map shows the lands revealed by Jenkinson's first voyage which lasted from 1557 to 1560. His map, which was provided to Ortelius, was completed after that voyage, in 1562.

Ortelius' map spans from Latvia, Lithuania and the Black Sea in the west to the Ob River and the Syr Darya in the East. The south limits of the map are marked by the Caspian Sea and the Amu Darya River (Oxus, here spelled Ougus). The copious detail reaching from the White Sea to the Caspian Sea result from Jenkinson's voyage, which was the first recorded north-south voyage through Russia. His route can be traced south along the Oka and Volga Rivers, passing through the Khanate of Kazan and arriving in Astrakhan, near the Caspian mouth of the Volga. He then crossed the Caspian Sea, joining a merchant caravan and traveling for several months in the Tatar lands of the Nogai Horde, reaching Bokhara before deciding that wars and banditry blocked further passage. Jenkinson's attempts eastwards are also revealed here.

Filling in the Gaps

Beyond the rivers at the eastern limits of Jenkinson's map, the map is filled with vignettes depicting indigenous scenes, mainly drawn from Marco Polo. Throughout the map there are engraved Tatar warriors and camels, all the excellent work of engraver Franz Hogenberg. In the upper right, Ivan the Terrible himself is enthroned in a tent.

This map was first issued in 1570 to accompany Ortelius' great Atlas, Theatrum Orbis Terrarum, and was one of the first fifty-three maps included in the work. This map appears in five states, of which this appears to correspond to the fourth. (Over the course of the map's printing history, the waves in the Caspian Sea were reworked several times, as well as the hachure on the cartouche. The absence of hachure within the text frame of the cartouche, and the wave pattern in the Caspian best correspond with van den Broecke's fourth state.) The typography of the Latin text on the verso identifies this specific example as belonging to a 1601 edition of the Atlas. Ortelius' masterpiece was successful, and its maps are well represented in institutional collections.


Anthony Jenkinson (1529 - 1610/1611) was an English explorer and traveller. On behalf of the English Muscovy Company and the English Crown, he was one of the first Englishmen to explore Muscovy and present-day Russia. He made four expeditions to Muscovy, and met Ivan the Terrible himself several times. Jenkinson was born to property and wealth, and was trained to be a merchant. By 1568, Jenkinson had become a pivotal researcher for the Muscovy Company, with ties by marriage to the family of that company's founder. Anthony Jenkinson became the first English Ambassador to Russia in 1566, sailed from London, England, to land at Russia near the mouth of the Dvina River close to the convent of St. Nicholas at Nyonoksa. The journey brought him, by 1558, to Moscow. He traced a route south along the Oka and Volga Rivers, passing through the Khanate of Kazan and arriving in Astrakhan, near the Caspian mouth of the Volga. He then crossed the Caspian Sea, joining a merchant caravan and traveling for several months in the Tatar lands of the Nogai Horde, reaching Bokhara before deciding that wars and banditry blocked further passage. He returned to Moscow in 1559, and London the following year. Jenkinson produced a map based on these travels, which provided the basis for Ortelius' map of Russia in his 1570 Theatrum orbis terrarum. He would return to Russia in 1561, 1566 and 1571 to negotiate trade relations between Britain and Muscovy, treating with Ivan the Terrible personally. In addition to the map of Russia Ortelius published, Jenkinson's travel accounts were printed in Haklyut's Navigations. Moreover, Jenkinson's personal letters have survived to provide damning illumination of Ivan the Terrible's regime. Learn More...

Ortelius, A., Theatrum Orbis Terrarum, (Amsterdam) 1601.     Abraham Ortelius' magnum opus, Theatrum Orbis Terrarum, was the world's first regularly produced atlas, which 'set the standards for later atlases . . . It was the first undertaking of its kind to reduce the best available maps to an uniform format.' (Koeman) A modestly-sized work of fifty-three maps in its first edition of May 1570, it was an immediate success: there were three further editions that year, and the work remained in print for a total of 32 editions, the last of which was 1641, well after its author's 1598 death. Ortelius added to his atlas constantly, and by 1595 the Theatrum contained 147 maps. Ortelius is renowned generally as an editor, and indeed much of the Theatrum is compiled from a variety of sources: in such cases, Ortelius was scrupulous in naming his sources. But Ortelius was also a mapmaker in his own right: many of his maps are a distillation of various sources into his own work, and there were many maps - particularly in his atlas of Biblical and ancient history Parergon - which were entirely Ortelius' work. In his role as an editor, Ortelius followed in the footsteps of Munster, whose Cosmographia was, until Ortelius, the best window on the world for the curious European reader. In terms of the artistry of his maps, Ortelius oversaw the first great flourishing of copperplate engraving in the service of cartography to occur in Northern Europe. Ortelius' work provided the model for the atlases of Mercator, Hondius, Blaeu and all their progeny in the 17th century - many of whom were to produce faithful editions of Ortelius' maps in their own productions.