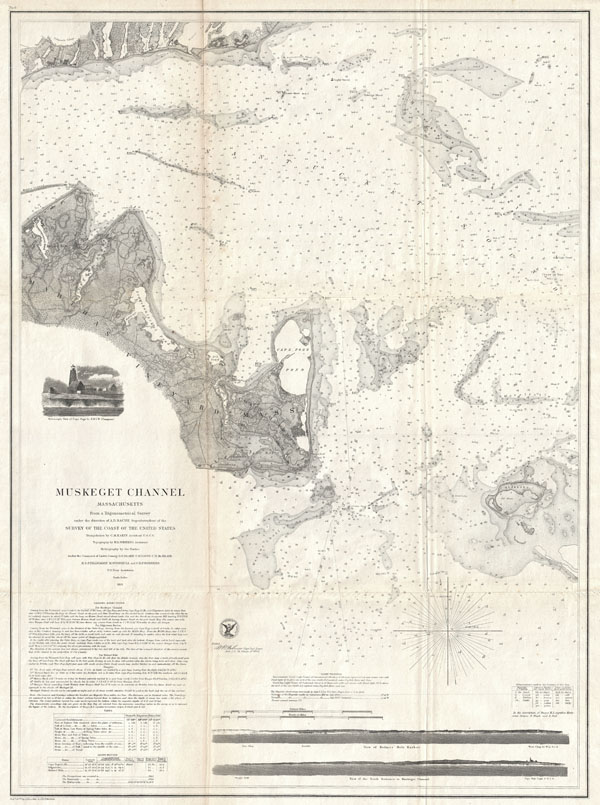 A very appealing color example one of the better mid-19th century large format nautical maps or charts of Martha's Vineyard. This rare map depicts most of the island of Marthas Vineyard though does cut out its southwestern portion. Includes both edgartown and Holmes Hole. The western extension of Nantucket appears in the lower right quadrant. Towns, villages, farms, and roads are all beautifully rendered. So too are nautical indications, oceanic depths, and undersea features. There are views of both Holmes' Hole Harbor and the entrance to Muskeget Channel. There is also a telescopic view of the Cape Poge lighthouse.

The triangulation for this chart was accomplished by C. M eakin. The Topography is the work of H. L. Whiting. The hydrography was completed by parties under the command of G. S. Blake, C. H Davis, C. H. Mc. Blair, H.S. Stellwagen, M. Woodhull, and C. R. P. Rodgers. This map was created under the direction of A. D. Bache, Superintendent of the Survey of the Coast of the United States and one of the most influential American cartographers of the 19th century.

Good condition. Blank on verso. Minor toning and spotting along original folds (see photo), else clean and beautiful.
Looking for a high-resolution scan of this?