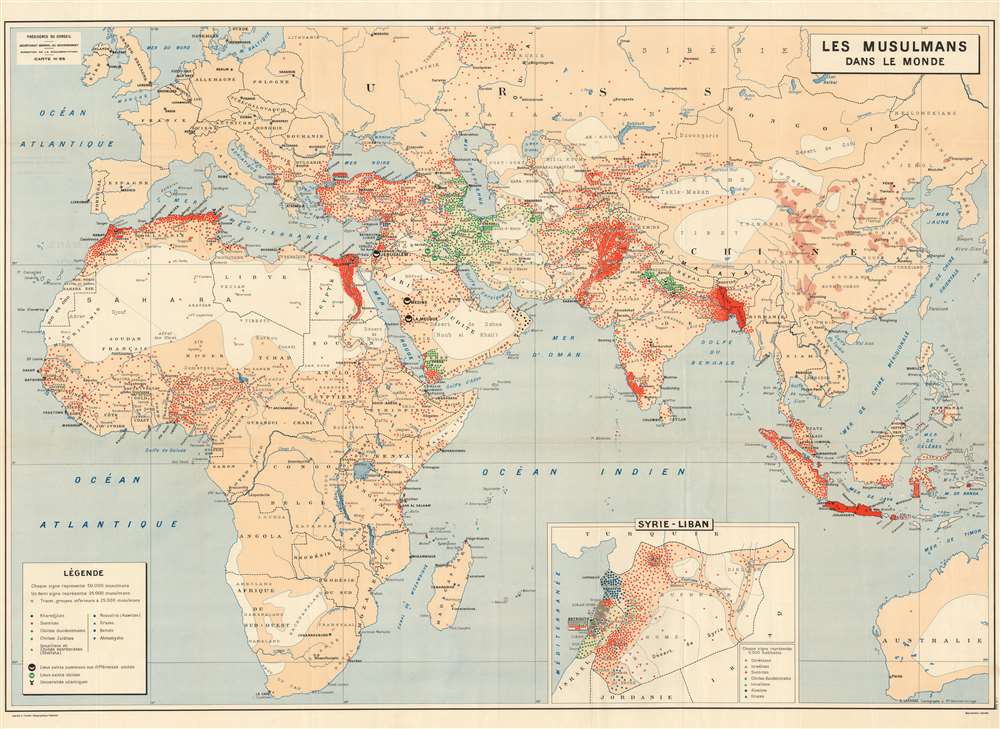 This rare 1952 world map produced by Georges Lafosse shows the distribution of Islam throughout the Eastern Hemisphere. (Despite the title, the map does not include the Americas). Using colored dots, (each indicating a population of approximately 50,000) the map is able to differentiate between major sects: Sunni, Shiite, Kharijite, Alawites, Druze, Bahai'i and Ahmadiyya Muslims are all shown - of course, we realize that the Druze and Baha'I are not Muslims, but in this case we follow the conventions of the map. Holy sites for the Sunni and Shia are marked as are Muslim universities. An inset map focuses on the religious populations of Syria and Lebanon.

The map was produced by the Institut Géographique National for the French Direction de la documentation, the directorate tasked with the mission of informing government officials on issues related to economics, geopolitics, finance, culture, and foreign affairs. Many - such as this present map - focused specifically on issues pertinent to France's colonial interests. That these maps were not intended for public consumption is suggested by the notation 'Reproduction interdite' (reproduction forbidden) in the lower right.

This map was produced by the French Direction de la Documentation as part of a series of thematic maps produced for governmental use; as such they were not widely disseminated. We find OCLC listings for examples in just eleven institutional collections.

Georges Lafosse (March 8, 1913?-???? ) was (is?) a prolific French cartographer active between 1952 and 1960. His name appears on dozens of maps, produced by the Institut Géographique National on behalf of various French government organizations, including the Centre de hautes études administratives sur l'Afrique et l'Asie modernes, the Centre de hautes études, d'administration musulmane, the Direction de la documentation, and the press service of the French Embassy. His biographical record is frustratingly vague. We do find a record for a Georges Lafosse born in Abbeville on March 8, 1913 having been interned at Dachau in January of 1941. If Lafosse was part of the Institut Géographique National at the beginning of the Second World War, it is possible that this was his route to Dachau: the IGN was famous for its counterfeiters, being experts in penmanship and having ready access to the materials necessary for the production of fake identity papers. Agents of the IGN took an active part in armed resistance from 1943 to the end of the war. Learn More...