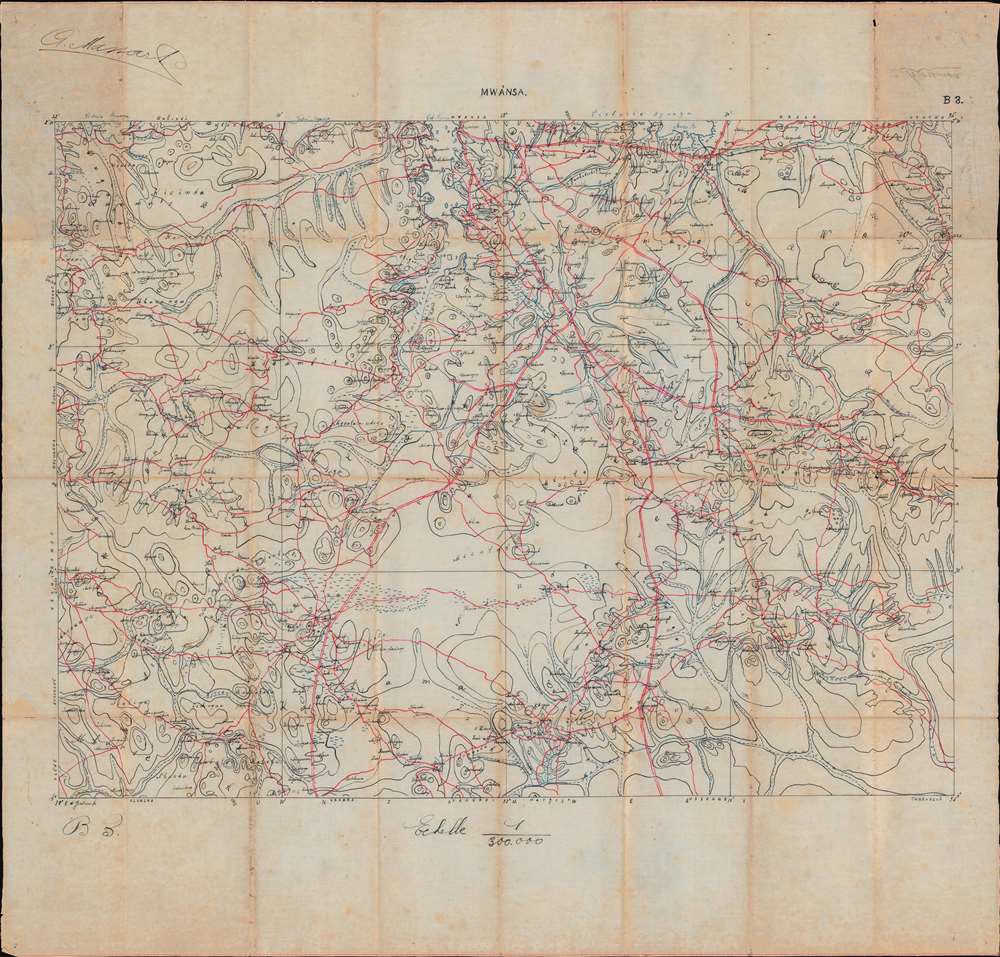 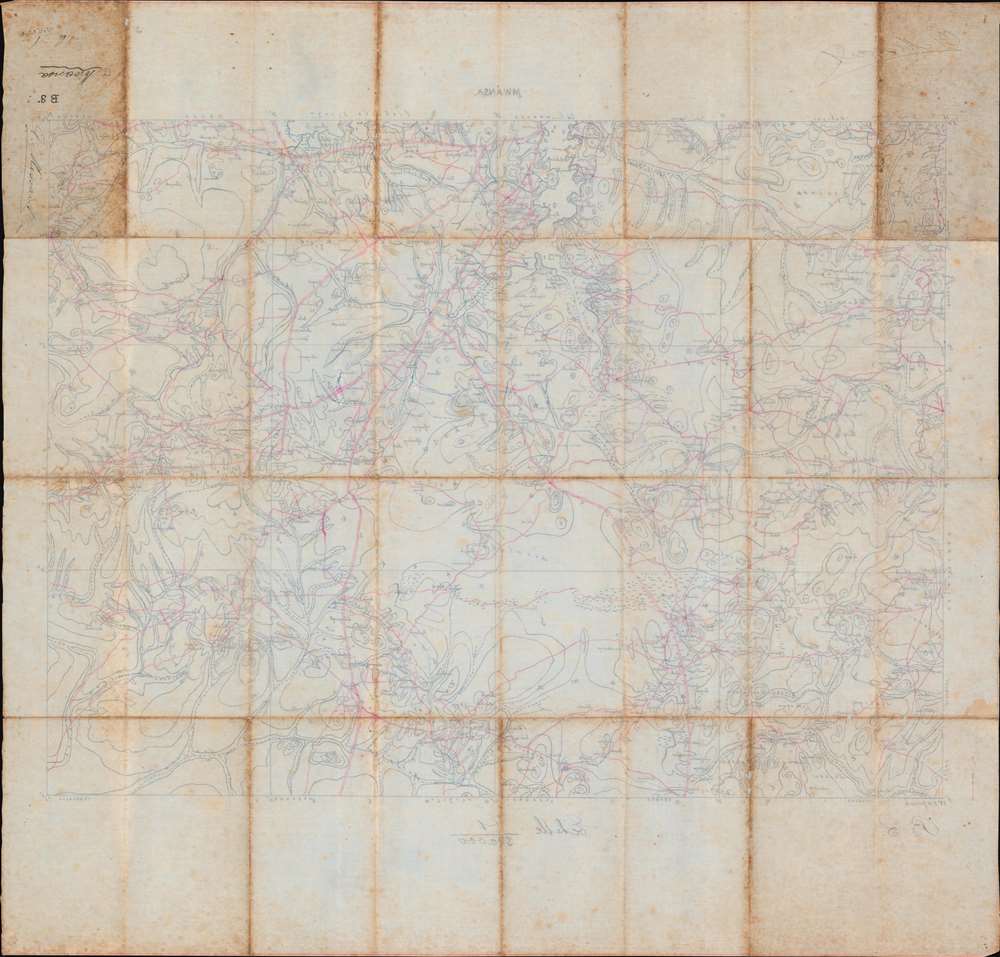 This is a unique manuscript record of reconnaissance and espionage at the height of the World War I East Africa Campaign compiled by Belgian Force Publique intelligence officer G. Massart. This c. 1916 hand-drawn field manuscript details the Mwanza region of northern Tanzania in anticipation of the Tabora Offensive, a major Allied action in the northwestern corner of German East Africa during the East Africa Campaign, World War I (1914 - 1918). The map shows latitude and longitude and offers a wealth never-before-mapped detail regarding topography, roads and paths (red lines), waterways, tribal villages, and geographical features. Before the war, the Mwanza was poorly understood, thus Massart would have been dispatched from the adjacent Belgian Congo to reconnoiter the area - vital for its port access to Lake Victoria - in advance of major action.

The map covers an area stretching, in the west, from Nzera Bay and Geita in the north to Isagana and Kahama (St. Michaël) in the south, to, in the east, the Magua Gulf in the north to Usanda in the south. Several German surveyors were active in the Mwanza in the early-mid 1890s, yielding the Keipert / Moisel maps of 1895 and 1915, which serve as a skeleton frame for the present map. This manuscript features a wealth of unique detail including meticulous topography and an exhaustive naming of indigenous villages. Of the roads and paths indicated, one worthy of particular attention runs roughly north-south from Mwanza, at top-center, through Shinyanga (Schinyanga, center, towards bottom-right), the two largest German outposts in the region, in the direction of Tabora, an important stop on the Tanganyika Railway (Tanganjikabahn) and one of German East Africa's main colonial headquarters.

At top-left is a signature appearing to be 'G. Massart', the same also appearing on the verso. An individual by the name of Massart was active in the Congo Free State from 1898, as a non-commissioned officer and gunsmith (premier-sous-officier-armurier) for the Force Publique, and was later listed in 1906 as an agent militaire. A source from 1913 notes Massart as a 'lieutenant d'infanterie de l'armée belge,' and a French-language account of the World War I East Africa Campaign also notes a Lieutenant Massart, a member of the Brigade Nord under the command of Col. Philippe Molitor, who led the capture the Mwanza.

Competition among Empires in East Africa

At the end of the nineteenth century following the Berlin Conference of 1884 - 1885, European powers swamped Africa in a rush to claim colonies - what came to be known as the 'Scramble for Africa.' In East Africa, the British and Germans vied for influence after Germany established a presence from 1885 on the coast of Tanzania opposite Zanzibar. Over the following decades, German influence expanded until it covered most of modern-day Tanzania, Burundi, and Rwanda. During the First World War, these colonies became a target for the Allies, namely the British operating from Kenya, Uganda, and Rhodesia, the Belgians operating from the Congo, and the Portuguese in Mozambique.

The East Africa Campaign and the Tabora Offensive

Unlike the trench warfare on the Western Front, the conflict in Africa was defined by mobile frontier campaigns, fought largely by Indian and African conscripts (askari). In East Africa, the outnumbered German forces under Paul Emil von Lettow-Vorbeck repeatedly defeated or otherwise tied down their foes with guerilla tactics, inspired by Lettow-Vorbeck's earlier battles against insurgents in German Southwest Africa. The Tabora Offensive, on the contrary, was an important success for the Allies, resulting in Mwanza being captured and German Ruanda-Urundi occupied by Belgians. It also differed from much of the East Africa Campaign in that the British contingent was relatively small, with the bulk of Allied troops under the flag of the Belgian Congo. As a result of the campaign, the Allies secured control of Lake Victoria and the western section of the Tanganyika Railway. However, their difficulties in defeating Lettow-Vorbeck's troops continued in other parts of East Africa until the end of the war.

This map is very similar to the published 1915 edition of a German map by Richard Kiepert and Max Moisel, titled 'Karte von Deutsch-Ostafrika / B3 Mwánsa,' part of a series of 29 maps on German East Africa. The Kiepert/Moisel map was likely the best available pre-war mapping of the region, and so would have been used by both sides as a 'skeleton' upon which to build subsequent reconnaissance. As a manuscript wartime piece, this map is a unique document capturing the rough and ready field operations in one of the most remote and poorly documented theaters of WWI.

G. Massart (fl. c. 1898 - 1916) was a military intelligence officer who participated in the Tabora Campaign of the East Africa Campaign during World War I. He was present in the Congo Free State from 1898, as a non-commissioned officer and gunsmith (premier-sous-officier-armurier) for the Force Publique and was later listed in 1906 as an agent militaire. A source from 1913 notes one Massart as a 'lieutenant d'infanterie de l'armee belge,' and a French-language account of the World War I East Africa Campaign also notes a Lieutenant Massart, a member of the Brigade Nord under the command of Col. Philippe Molitor that captured the Mwanza region. Learn More...

Good. On waxed linen. Some wear and toning on old fold lines.