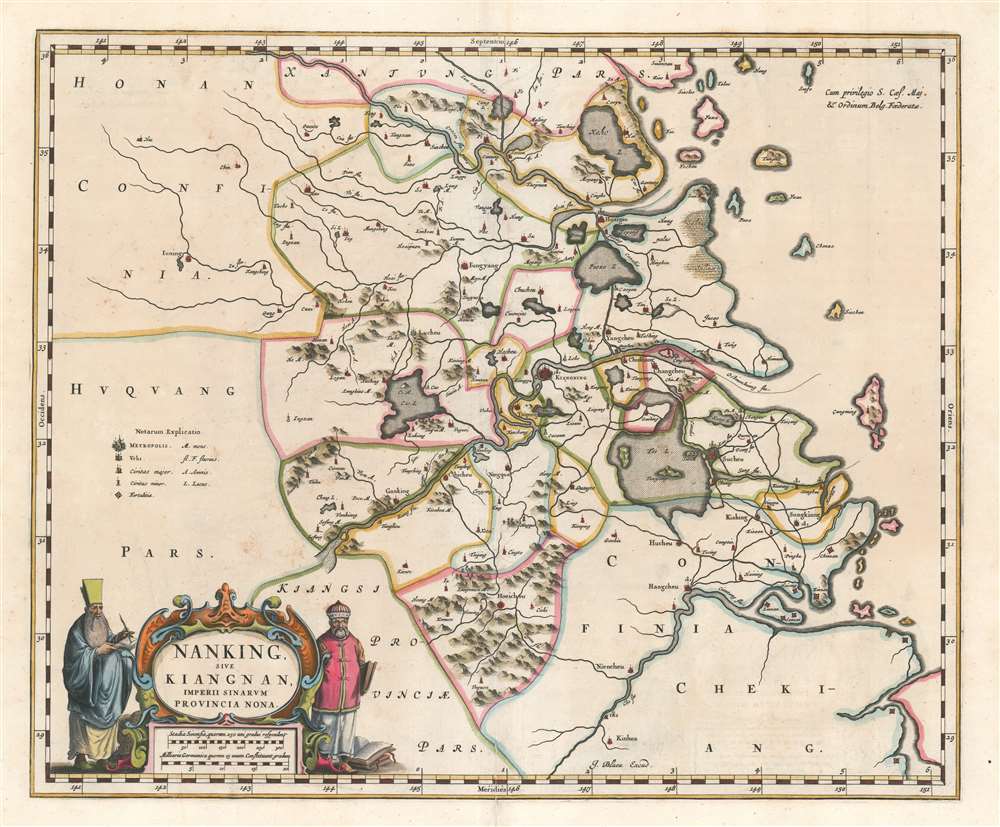 An beautiful and historic map of the region surrounding Shanghai and the Yangtze River.

This is a 1662 Martino Martini and Joan Blaeu map of Jiangsu Province and Shanghai Municipality in China. The map depicts the environs of the lower Yangtze River from west of Nanjing (Kiangning) to the East China Sea. Numerous cities and towns are noted and marked by symbols indicating their relative size and importance. Suzhou (Suchou) and Zhejiang (Hangzhou, Hangchou here) are among the identified cities. Modern-day Shanghai is located not far from 'Changno', but was only a small town at the time of this map's creation, and would only flourish into the city it is today after the Qing eliminated the Ming's prohibition on offshore travel. Mountains, , salt marshes, rivers, and lakes are also illustrated and a decorative title cartouche is situated in the lower left corner.

One of the Four Ancient Capitals of China, Nanjing served as the capital of the Wu Kingdom during the Three Kingdoms Period in 229 A.D. Then, during the Ming Dynasty (1368 – 1644), Nanjing served as one of the Chinese Empire's two capitals and was one of the most populous cities in the world. After the fall of Beijing to the Qing Emperor Li Zicheng in June 1644, Nanjing became the capital of the so-called Southern Ming Dynasty following the enthronement the Ming Prince Zhu Yousong. The Southern Ming Dynasty would survive and rule ever diminishing territory until the 1660s, when it was finally conquered by the Manchus.

This map was created by Joan Blaeu from work undertaken by the Jesuit missionary Martino Martini and published c. 1662. This map is a must-have for anyone interested in material relating to Shanghai.