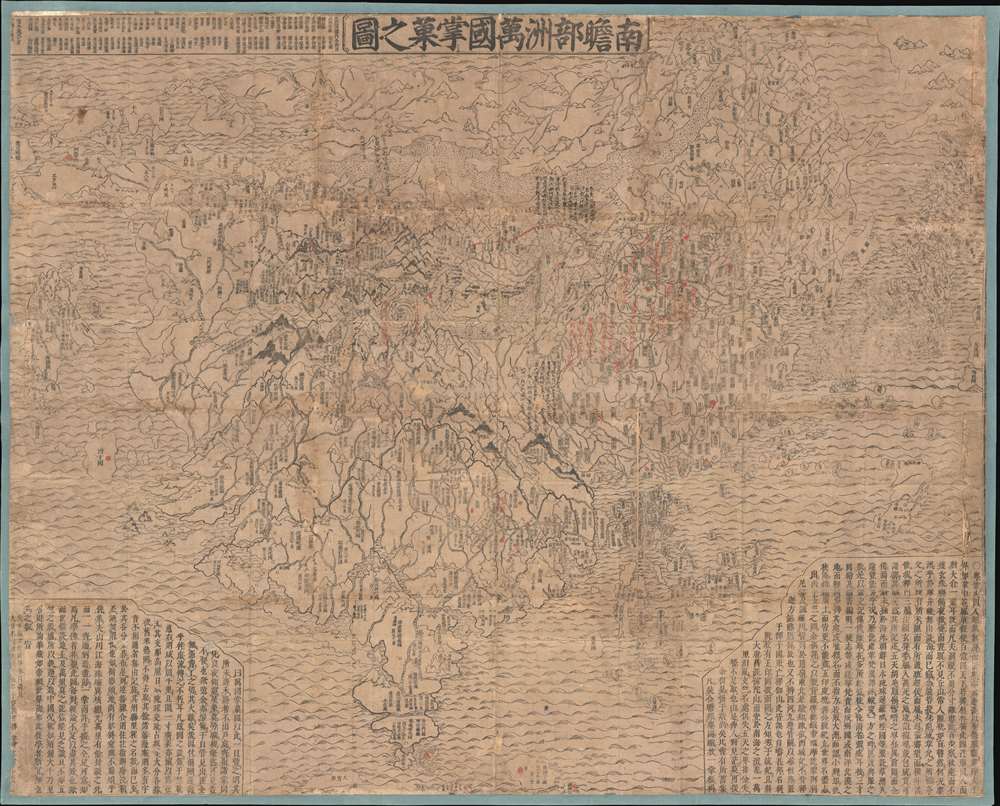 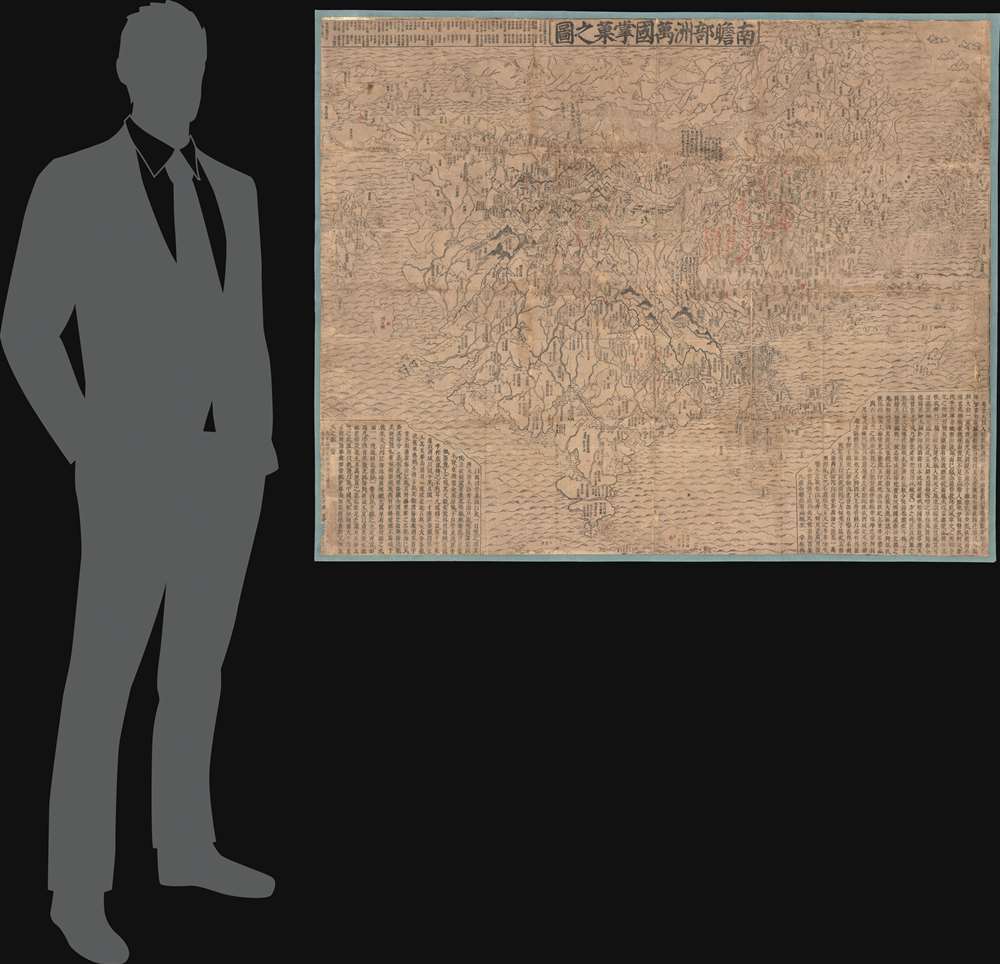 A seminal map of extreme significance. This is the first Japanese printed map to depict the world, including Europe and America, from a Buddhist cosmographical perspective. Printed by woodblock in 1710 (Hoei 7), this map was composed by the Buddhist monk Rokashi Hotan. Inspired by the 1653 publication of Si-yu-ki, a pilgrimage narrative of the Chinese monk Hsuang-Tsang's (602-604) travels to India in search of sacred Sanskrit writings.

Rokashi Hotan's map attempts to update Buddhist mythological cartography, as exemplified in the 1634 manuscript map Gotenjikuzu (Map of the Five Regions of India), to correspond with the Si-yu-ki, as well as with contemporary and ancient religious texts, Chinese annals, travel narratives, and even some European maps. Rokashi Hotan lists these texts, 102 in all, at the top of the map. The consequent product of Rokashi Hotan's work is this magnificent amalgam of disparate ideas and traditions.

In essence this is a traditional Buddhist world view in the Gotenjikuzu mold centered on the world spanning continent of Jambu-Dvipa. At its center is Lake Anavatapta, a whirlpool-like quadruple helix lake believed to be the center of the universe. This lake, which is commonly associated with Lake Manasarovar in northern India, is believed in Buddhist mythology to be the legendary site where Queen Maya conceived the Buddha. From the quadruple beast headed helix (heads of a horse, a lion, an elephant, and an ox) of Manasarovar or Lake Anavatapta radiates the four sacred rivers: the Indus, the Ganges, the Bramaputra, and the Sutlej.

Red ink overprint appears in several sections, providing alternative placenames, including both ancient names and those that had been recently updated. However, these 'updates' still refer to names used in the Qing Dynasty, so the overprint must be quite old, perhaps dating to soon after the map's original printing. Other areas are marked out in red to indicate their significance. Most likely, an avid reader of the Si-yu-ki or another Buddhist pilgrimage text annotated the map in tandem with the progression of the narrative.

On the opposite side of the map a series of islands is intended to represent Europe, which had no place at all in earlier Buddhist world maps, making this one of the first Japanese maps to depict Europe. Umukari (Hungary), Oranda, Baratan, and Komo (three names for Holland, the last meaning 'red hair,' a common term for the Dutch at the time), Arubaniya (Albania?), Itarya (Italy), Suransa (France) and Inkeresu (England) are all named. Africa appears as a small island in the western sea identified as the 'Land of Western Women.'

Of special note is Rokashi Hotan's mapping of the Americas. Prior to this map America had rarely if ever been depicted on Japanese maps, so Rokashi Hotan turned to the Chinese map Daimin Kyuhen Zu (Map of China under the Ming Dynasty and its surrounding Countries), from which he copied both the small island-like form of South America (just south of Japan), and the curious land bridge (the Aleutian Islands?) connecting Asia to what the Japanese historians Nobuo Muroga and Kazutaka Unno conclude 'must undoubtedly be a reflection of North America' (page 63). The land bridge suggests that the mapmaker had some access to European cartography, as it closely resembles the Nicholaas Witsen's cartography of 1687. Such access would be unsurprising considering the Dutch presence in Nagasaki.

While this map represents a significant step forward in the Japanese attempt to combine religious and contemporary geographic knowledge it remains in essence a Buddhist map. It is likely that Rokashi Hotan was aware important European style maps circulating in China at the time. The Mateo Ricci Map is one such example and copies were known to have reached Japan in the 17th century. It is curious that Rokashi Hotan chose to ignore it and other Eurocentric data in exchange for a religious world view, while at the same time attempting to reconcile Buddhist and modern geography.

Ultimately, this map makes a lot more sense when one understands that Rokashi Hotan scaled his world map not by distance but rather by religious importance. India, the birthplace of the Buddha, is the central locale in the Jabmu-Dvipa conception and on this map. Other countries, including China, Japan itself, and even more so the distant continents of Africa, Europe and the Americas, Rokashi Hotan considered 'but mote-like countries in the Jambu-Dvipa' and 'as small as a millet-grain.'

Rokashi Hotan's map became the model on which all future Japanese Buddhist world maps were drawn well into the 19th century. The confused cosmological view upon which his map is based, referencing at once religious, secular, and non-Buddhist teachings, foreshadowed the growing religio-secular conflict that would emerge in Japan during the coming centuries. Ultimately this is one of the most important, beautiful, and influential printed maps ever to emerge in Japan.

Two identical versions of this woodblock map appeared in 1710. The more common was published by Chobei Nagata of Kyoto. A less common example was published by the bookseller Bundaiken Uhei and corresponds to this example. Bundaiken Uhei's mark and name appear in the lower left quadrant. A strong crisp image suggests that this is one of the first examples that Bundaiken Uhei printed, as wooden plates tend to wear quickly and many other examples show signs that the woodblock was more heavily worn.