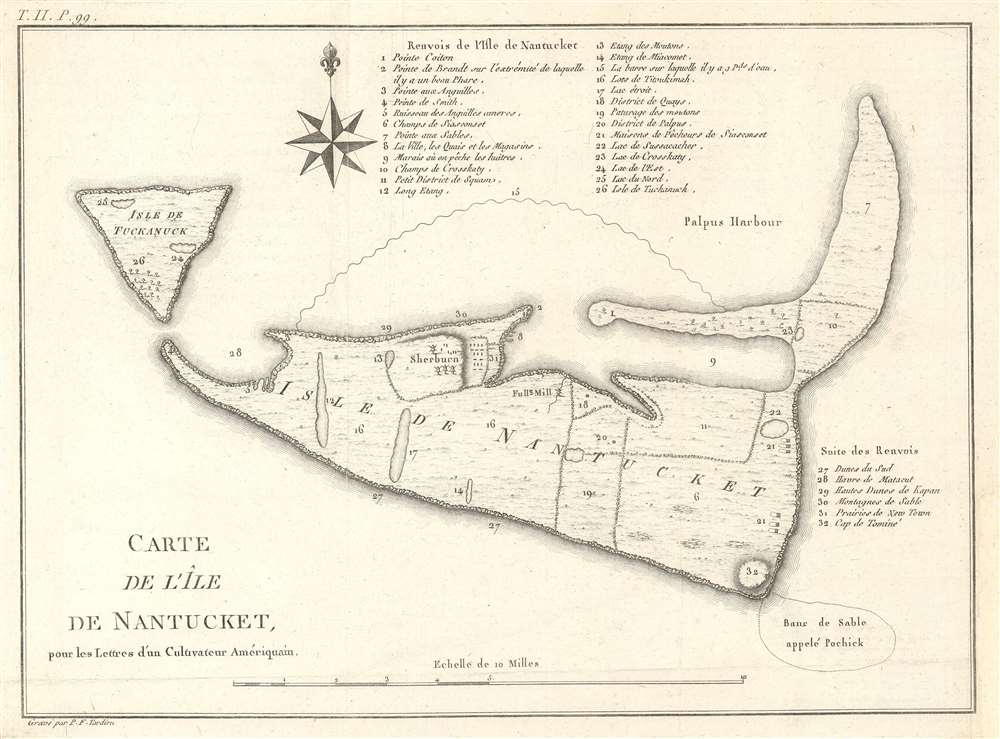 This small but important map by P. F. Tardieu is the earliest obtainable separate map of Nantucket Island, Massachusetts. It covers Nantucket in full as well as the adjacent island of Tuckanuck (Tuckernuck Island). Throughout some 32 locations are identified via a numeric coding system associated with tables above and to the right of the main map. Property divisions on the island are noted as well as a few important buildings, mills, and villages.

Letters of an American Farmer

This map was prepare to accompany Michel Guillaume St. Jean de Crevecoeur's 1787 Lettres d'un Cultivateur Ameriquain (Letters of an American Farmer), a collection of essays describing American life in such bountiful language that it inspired a wave of French immigration to North America. Howes describes Crevecour's work as a 'description of American life of great influence in attracting European immigration in the post-revolutionary period. As literature unexcelled by any American work of the eighteenth century.

This map was engraved in 1785 by Pierre Francis Tardieu, whose imprint appears in the lower right. It was not published until two years later, in 1787, when the first French edition of Michel Guillaume St. Jean de Crevecoeur's 1787 Lettres d'un Cultivateur Ameriquain was issued. The map is a based upon a similar map issued in the 1783 English edition, Letters of an American Farmer, but it much more finely engraved reflecting Tardieu's mastery. There is also a similar map of Martha's Vineyeard. Always desirable, these maps come rarely to the market.